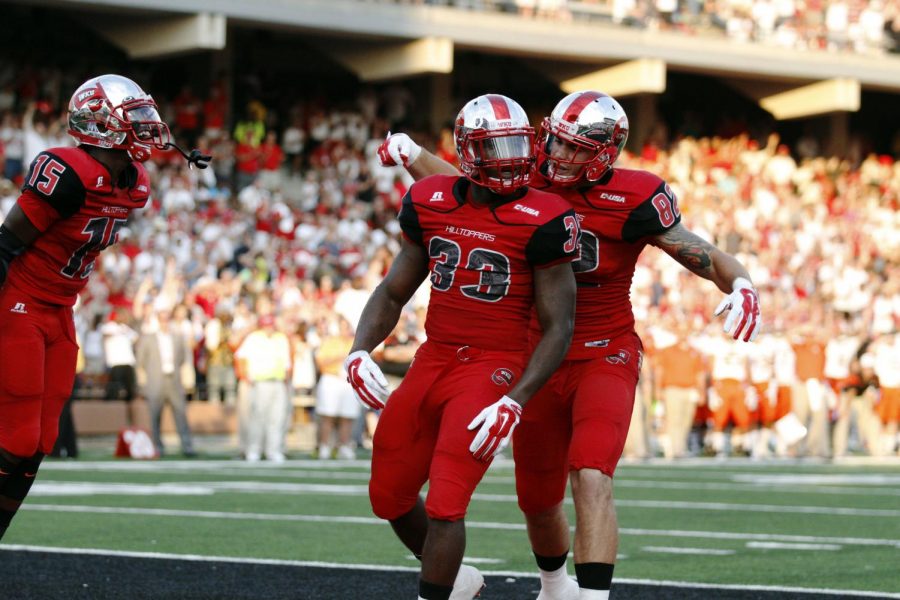 In WKU’s season opener this past Friday, the Hilltoppers used a potent offensive attack to stun Bowling Green State, 59-31.

But on Saturday against Big Ten opponent Illinois in Champaign, Illinois, Head Coach Jeff Brohm and company will be without their element of surprise.

“They’re going to try to take away what we do well,” Brohm said. “To be honest with you, I think we were able to execute well on offense in the first game because of the element of surprise. I don’t think Bowling Green knew exactly what we were going to do. Illinois does.”

The Hilltoppers’ fast-paced offense ran 96 plays and produced 59 points and 708 total yards of offense against BGSU. WKU’s primary weapon against the Falcons was the screen pass, which led to three touchdowns from 55, 34 and nine yards.

With their up-tempo game plan exposed, Brohm said WKU will look to make minor adjustments to throw off the Fighting Illini, such as taking shots up the field, in an effort to open up the run game on offense.

WKU enters Saturday with a combined 0-4 program record against Big Ten opponents. This matchup marks the first meeting between the Hilltoppers and the Fighting Illini.

Illinois is coming off a 4-8 season that yielded only one win in Big Ten play. The Fighting Illini return 13 starters – seven on offense and six on defense – and are led on offense by Oklahoma State transfer quarterback Wes Lunt and junior running back Josh Ferguson.

Lunt won the starting job at Oklahoma State as a freshman before suffering a season-ending injury. He threw for 437 yards and four touchdowns for the Cowboys in a 59-38 loss to Arizona – his lone start.

Lunt recorded the most successful debut in Illinois program history on Saturday, throwing for 285 yards and four scores in Illinois’ 28-17 win against Youngstown State, including three touchdowns in the fourth quarter, which helped the Fighting Illini squeak past Youngstown State.

Brohm said the lackluster showing in the season opener will motivate Illinois against the Hilltoppers on Saturday.

Senior Earnest Thomas III, junior Mason Monheim and sophomore T.J. Neal – Illinois’ linebacker trio – lead the Fighting Illini on the defensive side of the ball. The three combined for 27 stops and one sack in their season-opening victory over Youngstown State.

Thomas is the leading returning tackler, having allotted 101 as a safety last season. He’ll move to a linebacker/safety hybrid position this year.

Several faces in the WKU football program are familiar with Champaign, Illinois prior to the road trip this weekend.

Brohm spent two seasons as quarterback coach for the Fighting Illini in the 2010 and 2011 seasons, and secondary coach Mike Cassity, spent three seasons as defensive coordinator from 2001 to 2003.

“They play hard on defense, they don’t give you a lot,” Helton said. “They make you work for it. I think they’re going to walk up on top of you, try to make you earn every yard that you get…We have to go into that game saying, ‘Hey, our players need to make the plays that are given to them.’ We’ll get the ball to the right guys, but they’re going to make us earn everything we get.”

In addition, redshirt junior tight end Tim Gorski hails from Illinois, having grown up in Chicago. Gorski said that he’ll save the emotions for after the game – the task at hand is leaving with a victory.

“We’re going to go out there and, really, just give it our all,” Gorksi said. “Not worrying about the week ahead or the week behind – just focus on this game and do everything we have to do to get the ‘W.’”

The game will air on the Big Ten Network on Saturday at 11 a.m. Central Standard Time.