Watch now: After a century in storage, wood from Madison lab being used to repair U.S. Capitol 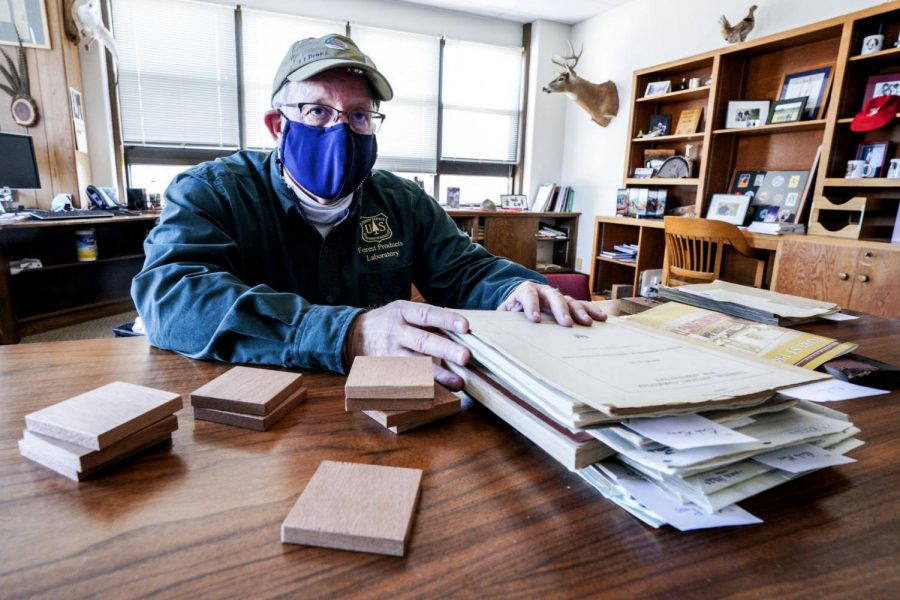 Bob Ross, a wood scientist with the Forest Products Laboratory, with samples of mahogany left over from a World War I study that will be used to restore parts of the U.S. Capitol damaged in the Jan. 6 insurrection.

Sometimes that pile of wood in the basement actually does come in handy.

A stash of priceless mahogany that sat for decades in a Madison laboratory will play a key role in restoring damage caused when a mob stormed the U.S. Capitol on Jan. 6.

The wood was brought to the Forest Products Laboratory during World War I for research into aircraft propellers. When the project ended, the leftovers — 78 clear mahogany boards about 12 feet long — were put into storage.

“A few of us knew it was there,” said Bob Ross, a wood scientist who’s worked at the U.S. Department of Agriculture lab for more than three decades.

Fast forward to January, when Ross got a call from a colleague who had been working on a joint project with the lab.

Nate Kamprath, a forest products engineer for the U.S. Army, said while looking at photos of the Capitol riot he noticed damaged mahogany millwork.

“I was aware of the amazing WWI propeller mahogany stock,” Kamprath said. “It was just a matter of connecting the two dots.”

After Ross agreed to transfer the wood, Kamprath made contact with staff at the Architect of the Capitol, the federal agency responsible for preserving the landmark buildings and grounds.

A spokesperson for the Architect of the Capitol said the wood will be used this summer to repair doors and millwork damaged during the January riot.

Because of international protections, the type of high-quality, old-growth mahogany used in the Capitol is no longer commercially available.

Mary Oehrlein, the historic preservation officer for the Architect of the Capitol, told the publication Roll Call that the wood is priceless, “unavailable at any price, anywhere in the world.”

While the exact origin of the wood is unknown, one of the boards was stamped “From I.T. WILLIAMS & SONS.” Ross said the company went out of business in the 1970s, but his research suggested it was harvested in the early 20th century in the Philippines, South America or Africa and moved through New York on its way to Madison.

“There’s really very few people left,” Ross said. “We got lucky that we even found those shipping labels. That was an incredible find.”

On Feb. 25, Ross and his colleagues triple-wrapped the 3,000-pound stack of lumber and loaded it onto a flatbed truck. The shipment went through storms on the 850-mile journey to Washington, D.C., but on March 1 Ross learned it had arrived.

“When the Capitol emailed me to say, ‘We got it, everything’s fine,’ I got some sleep,” he said.

Ross, who grew up in Michigan and earned a Ph.D. in engineering from Washington State University, said he toured the Forest Products Laboratory as a student and always dreamed of working at the lab, which has been advancing wood technology since 1910.

“I always wanted to have the opportunity to work here because of the history,” he said. “How lucky can you get?”

His research involves the use of X-ray technology to assess the strength of wood in a tree or structure without destroying it.

Over the course of his career, Ross has consulted on reconstruction of the USS Constitution, the Civil War battleship known as Old Ironsides, New Orleans homes damaged by Hurricane Katrina, and the condition of a 2,500-year-old Egyptian sarcophagus for a St. Louis museum.

Ross said the work on Katrina was especially tough because of the loss of lives, but having a role in restoring the Capitol is one of the most rewarding projects of which he’s been a part.

“When you really think about it, the Capitol, the U.S. Capitol, that’s the heart of our democracy,” Ross said. “To think they’re just calling some kid from Michigan, I could never have imagined that.”