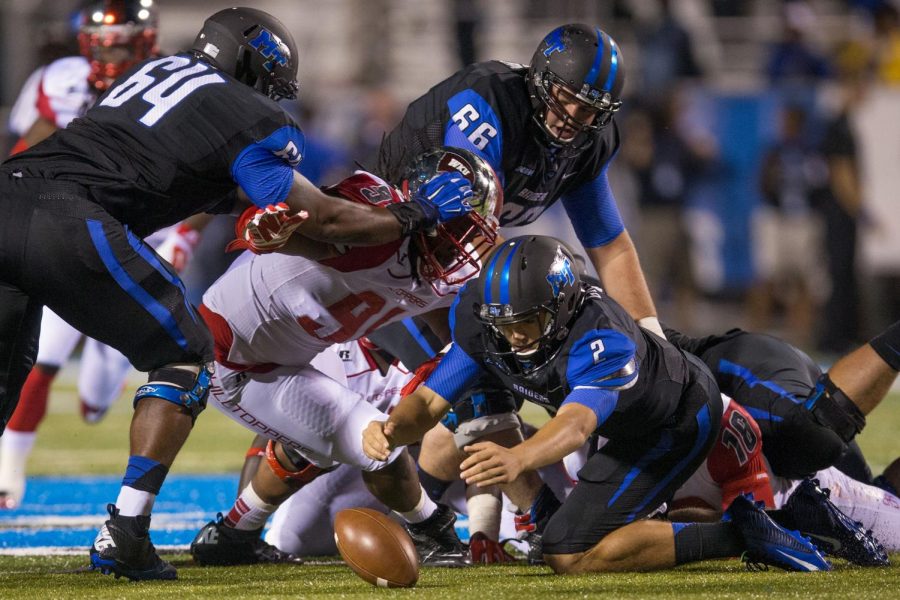 Sophomore quarterback Austin Grammer fumbles and recovers the ball during the first half the WKU vs Middle Tennessee State game in Murfreesboro on Sept. 13, 2014. Nick Wagner/HERALD

Murfreesboro, Tenn. – WKU scored 21 unanswered points in the second quarter and found itself leading 24-14 with 5:51 to play in the first half. After a Cody Clark field goal pulled MTSU within a touchdown, WKU got the ball back with 3:53 until halftime.

On the Hilltoppers’ second play, Brandon Doughty looked to his left and under threw a one-on-one matchup between Jared Dangerfield and Jared Singletary, with Singletary coming down with the interception. Grammer scored his second touchdown of the night with 1:27 left in the quarter to tie the game at halftime.

“Really in the first half we gave up too many rushing yards really letting the quarterback scamper down the field and that’s what really killed us,” Holt said.

In the third quarter, Leon Allen led a charge to the goal line that started at the WKU 16 yard line. Allen scored from four yards out, but the junior’s knee was down just before the goal line and the play was reversed. The Blue Raider defense stuffed WKU on fourth-and-goal.

Head coach Jeff Brohm said after the game he felt the team had many opportunities to put the game away.

“It as a back and forth game,” Brohm said. “We had a few chances down in there to score. We tried to hammer it up the middle and we didn’t get it and unfortunately that hurt us. I like to be able to run the ball when we get down there tight and we weren’t able to do that.”

The last time WKU visited Floyd Stadium in 2011, the Hilltoppers defeated the Blue Raiders 36-33 in 2OT.

The last four meetings between the two schools have been decided by a total of 12 points and the Blue Raiders lead the series 34-29-1.

“I feel what they felt a couple of years ago,” McNeal said. “I hate the way it happened like that. I thought we were going to pull it off but things happen.”

The loss drops WKU to 1-2 on the season and 0-1 in its first ever game in Conference USA. Brohm understands that being in conference that matches the Hilltoppers’ playing style calls for close games like Saturday night.

“Every game the rest of the year is going to be like that,” Brohm said. “They’re going to go down to the wire. We’re going to have to find ways to win.”