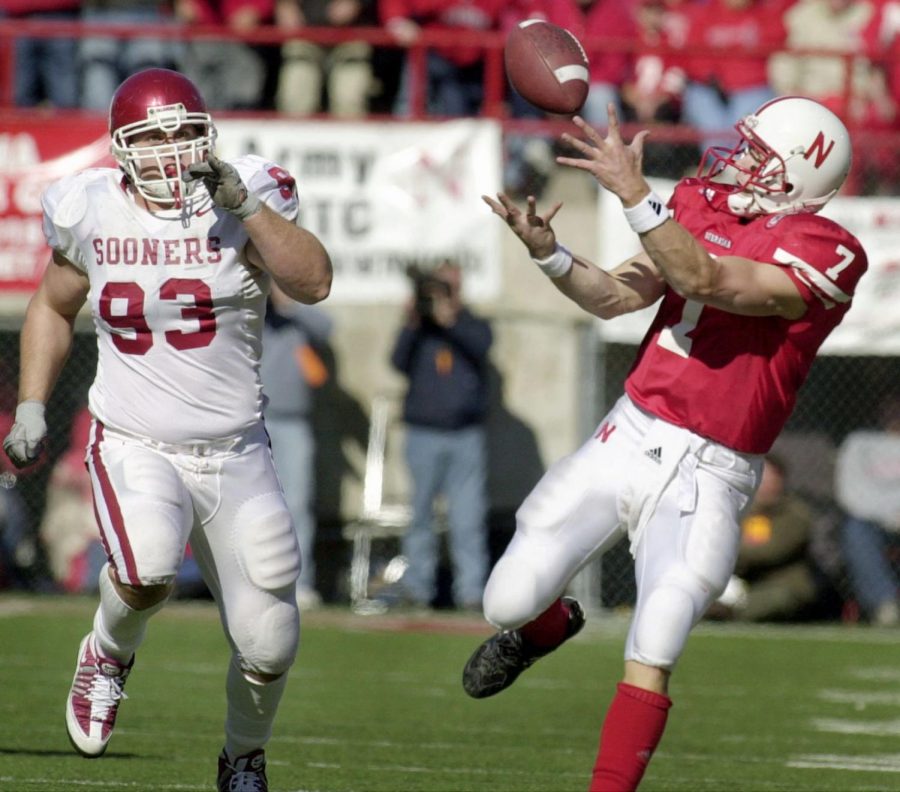 NU quarterback Eric Crouch catches a 63-yard touchdown pass from Mike Stuntz in front of Oklahoma's Kory Klein, sending the Memorial Stadium crowd into a frenzy and helping the Huskers win 20-10 in 2008.

Nebraska threw play-by-play announcer Warren Swain for a loop when freshman Mike Stuntz hit his receiver in full stride down the left sideline against No. 2 Oklahoma at Memorial Stadium.

“He’s got a man out there!” Swain says during the call of the first-down play from the NU 37-yard line. “It is (a very, very long pause) Eric Crouch!”

Sure enough, the Husker QB, who, after handing off to running back Thunder Collins, slipped out of the backfield past the Sooner secondary and hauled in the Stuntz pass for a 63-yard, game-clinching touchdown.

Nebraska coach Frank Solich served up some razzle-dazzle with third-ranked Nebraska clinging to a 13-10 lead in the fourth quarter.

On the play — called Black 41 Flash Reverse — Collins lined up as a receiver, came in motion, took the handoff from Crouch and lateraled the football to receiver Stuntz heading in the opposite direction. The left-handed Stuntz, who played quarterback in high school, then tossed a perfect strike to a wide-open, streaking Crouch.