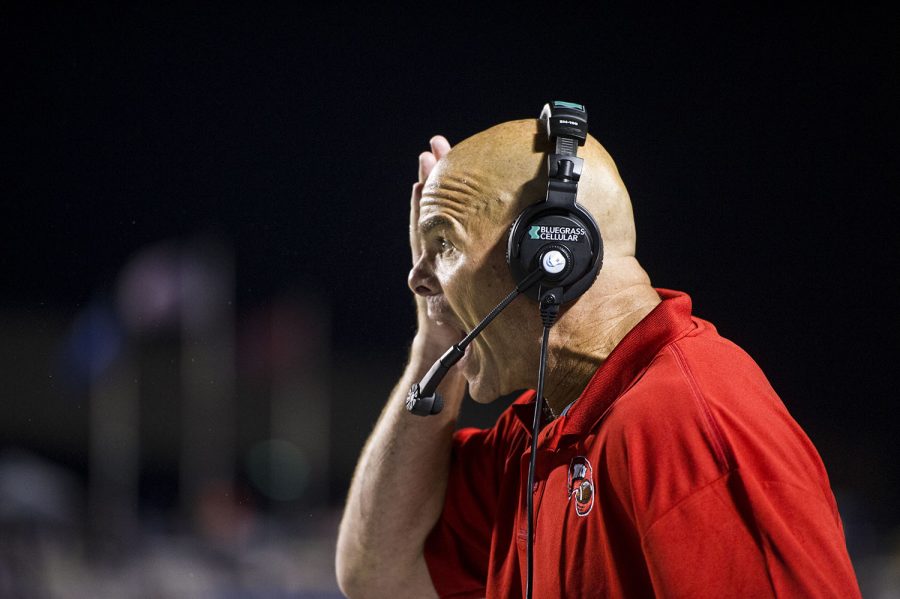 While sitting on my couch watching a replay of the LSU and Louisiana-Monroe game on the SEC Network Tuesday night, a reassurance came over me that three weeks into the college football season, WKU is indeed in a better place than it was a year ago.

Allow me to paint a picture here.

The entire landscape of college football has changed with the incorporation of the college football playoff this year. This long-overdue installment allows the best-of-the-best to truly determine a champion on the field rather than depend on a computer system to set up a championship game.

This means that, theoretically, it’s anyone’s ballgame. The power five conferences of the Big Ten, Big 12, Pacific-12, Atlantic Coastal Conference and Southeastern Conference are the assumed and indisputable representatives in the fight for a spot in that four-team playoff to determine a national title. But there are other conferences that are not bowing down to this power five so suddenly.

All this is to point out that WKU’s own Conference USA is making some noise in this young college football season. There haven’t been major upsets, but in games where the C-USA team is a heavy underdog with a substantial check in hand afterward, these teams haven’t gone down easily.

The same thing happened last year in the conference while WKU was in the Sun Belt Conference. C-USA isn’t a cupcake league, but in games versus any opponent in one of the power five conferences, the C-USA team is hardly favored.

In week two of this season, six teams, WKU included, lost by just under two scores to teams in either the SEC, Big Ten or Big 12.

“We took a lot of time in the summer and examined all the teams we’re playing,” Head Coach Jeff Brohm said on Tuesday. “I’m not going to lie, we knew they were very good football teams, and I think they’ve shown that the first three weeks. Very competitive from top to bottom, even teams that you may not have thought normally as much are playing very well.”

This isn’t company WKU is quite used to. To remind yourself, take a glance at the scores of WKU’s former pals in the Sun Belt against the same, or arguably, lesser level of competition. Granted, there are those teams from both conferences who get completely trounced by the bigger schools (see teams playing Alabama the past two weeks), but when comparing the Sun Belt and C-USA, I don’t think there’s any doubt WKU is moving in the right path with the right association.

WKU’s back-to-back wins against Kentucky marked the first time the school had ever defeated an SEC team. So appropriately, the Hilltoppers advanced their competition to surround themselves among teams that are putting up equal fights against bigger opponents.

This is something we all knew when the school announced in 2012 its move to a new conference, but now we’re seeing the results on the field develop into fruition.

“It’s going to be tough competition,” Brohm said. “We’re new to the league. We came from a league outside of here, not too familiar with these teams. These teams have played tough competition every year. We have to raise our level of play, we have to raise our level of preparation, we have to find ways to compete and battle and win some of these guys because I believe a lot of them are going to go down to the very end.”

It’s safe to say he knows all about that first hand since the Hilltoppers’ 50-47 triple overtime loss to rival Middle Tennessee State University in their first ever C-USA game. Even with a 1-2 record, WKU is displaying that they are one of those teams that defines the competition C-USA is bringing to college football this season.

Since WKU is on a bye week, Brohm may very well continue to look at the conference and what his team’s future opponents display on the field. The season is still young, but it’s been a product the school can be proud to be associated with so far.