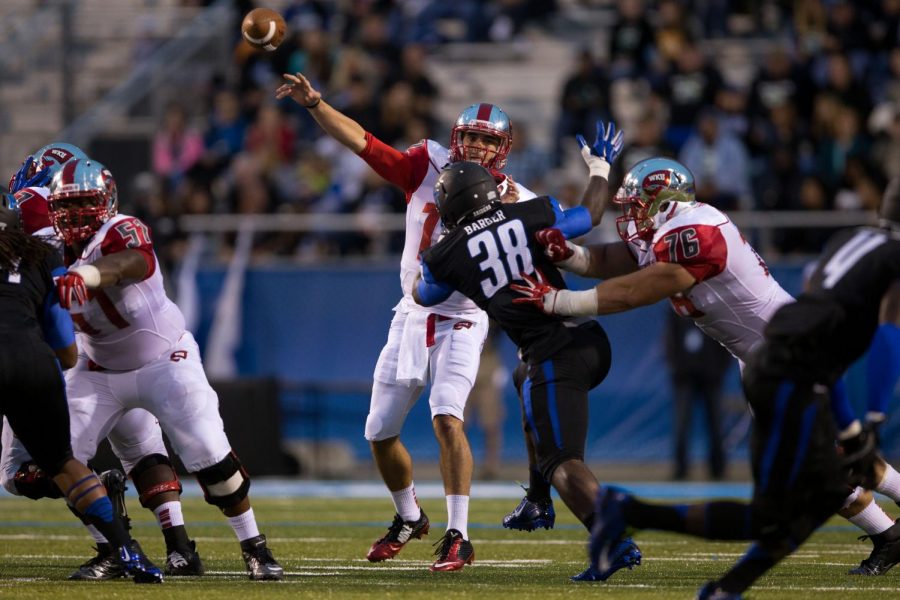 The rivalry is back.

After a year-long hiatus from WKU and Middle Tennessee’s intense rivalry, the two programs met on Saturday night and added another drama-filled chapter to the story as the Blue Raiders narrowly defeated the Hilltoppers, 50-47, in triple overtime.

WKU (1-2) and MTSU (2-1) traded the lead a total of eight times and were tied five times in the contest, which took four hours and three minutes to complete. The game is tied with WKU’s 1997 triple-overtime win over Murray State for the longest bout in program history.

“It’s one of those games,” Head Coach Jeff Brohm said after the game. “I think our team battled hard. They competed through a lot of momentum swings. I’m proud of them, proud of how hard they played. They fought until the end, and that’s all you can ask for.”

Prior to Saturday’s matchup, each of the past three meetings between WKU and MTSU have come by an average of only three points per game – and the triple overtime thriller was no different.

MTSU escaped Smith Stadium with a 27-26 victory in 2010 off a late-game fumble recovery for a touchdown. In 2012, the Blue Raiders slipped past the Hilltoppers, 34-29, in Bowling Green with a fourth-quarter interception that spoiled WKU’s game-winning attempt.

The last time WKU traveled to Murfreesboro, Tennessee came in 2011, as the Hilltoppers’ Bobby Rainey, now with the NFL’s Tampa Bay Buccaneers, caught a game-winning touchdown reception in double overtime to give WKU a 36-33 win.

Redshirt senior wide receiver Willie McNeal witnessed Rainey’s game-winning catch as a sophomore, and he said he can sympathize after MTSU’s dramatic win.

“I feel what they felt a couple of years ago,” McNeal said following the loss. “I hate the way it happened like that. I thought we were going to pull it off, but things happen.”

The Blue Raiders improve to 34-29-1 in the all-time series, which is already the oldest rivalry in the Conference USA, despite even more record-breaking offensive performances from WKU.

The Hilltoppers hung a program-record 718 yards on the Blue Raiders, who entered the contest giving up an average of 290 in each of their first two games. WKU also ran 102 plays, which tops its previous record of 97 ran in the Bowling Green State season opening-game.

Norris, Henry and Dangerfield are the first Hilltopper receiving trio to each record 100 yards in a single game.

“With record breaking stuff like that…it’s something you want to celebrate,” McNeal said. “But with a loss you can’t really celebrate that. You have to go to film and learn from your mistakes and get ready for the next opponent.”

The Hilltoppers will have a bye week to get ready for their next test, as WKU will look to right the ship in Annapolis, Maryland on Sept. 27 against Navy.