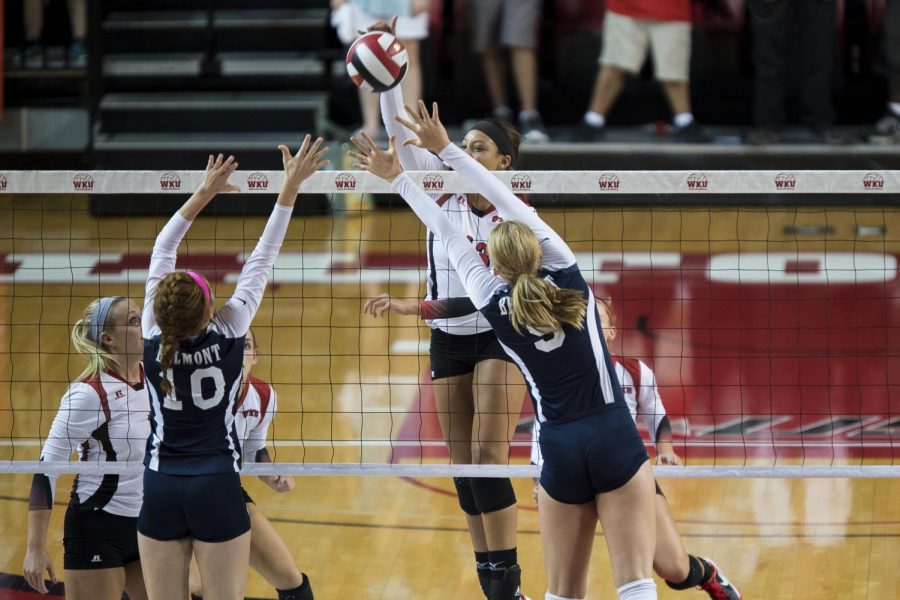 WKU volleyball edged its win streak into double digits with a win on Friday, but dropped the final two games at the Spartan Invitational in East Lansing, Michigan this past weekend.

Freshman outside hitter Alyssa Cavanaugh led the team with 12 kills and was the only Lady Topper to hit double-digit kills in the match.

WKU could not muster a similar performance against No. 25 Michigan State (7-4).

“We didn’t play well this weekend, but we are OK,” Head Coach Travis Hudson said. “This is a work in progress. We jumped out of the gate, and I think people were saying, ‘Here they go again,’ and we aren’t there yet. I’ve said that all along, even when we are winning.”

The stat sheets may have improved from their loss the previous night against Michigan State, but it wasn’t enough to give the Lady Toppers the edge.

Four Lady Toppers hit double digit kills on the match. Langenkamp had 13, Boyan had 12, Bodway had 11 and Cavanaugh had 10.

It still managed to be a match of errors and miscues for the Lady Toppers, especially from the service line. WKU dished out 14 service errors and allowed 10 LIU service aces.

Although the errors and miscues hurt the Lady Toppers, Hudson said that wasn’t the biggest of his concerns.

“The biggest disappointment for me this weekend was it was the first time all year, especially on Saturday against LIU Brooklyn, I don’t think we brought it from a competitive standpoint,” Hudson said.

“All year the reason I have liked this team so much is because we go out and compete every day, and if we continue to do that we are going to get better. Saturday we didn’t do that — it was mostly a competitive energy level issue, and trust me when I say we will get that fixed immediately.”

The Lady Toppers return to Diddle Arena tonight to take on Tennessee Tech (5-10) at 7 p.m.

“The sky is not falling for the volleyball team,” Hudson said. “I like where we are as a team. We just have to get some things corrected before conference play and we will.”