Pratt: WKU and MTSU series brings unity to the rivalry 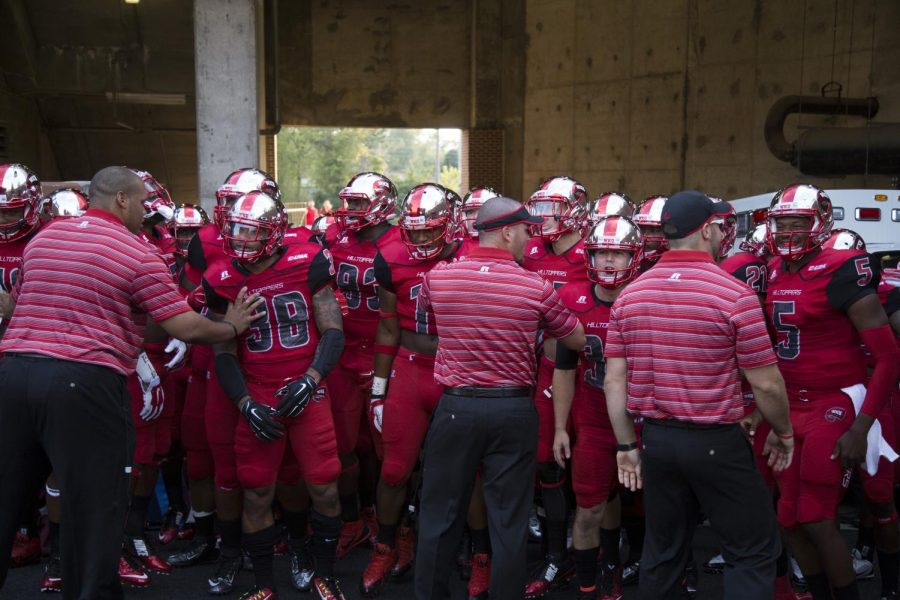 The WKU football team awaits to take the field before the WKU vs Bowling Green State University game on August 29. Mike Clark/HERALD

Hello there, rivalry week, it’s been a while.

It’s the 100 miles of hate, the red vs. blue. Hilltopper fans change MTSU to MUTS, and Blue Raider fans make fun of that silly blob WKU calls a mascot. This rivalry doesn’t carry the same hatred that Louisville and Kentucky holds, but the bitterness toward each school is still loud and proud.

A lot of you freshmen and sophomores don’t understand it because none of you were students the last time WKU played MTSU in football or basketball.

Take a visit to some of the message boards like Hilltopper Haven and Blue Raider Zone to get a taste of what’s going on this week. Because I would probably never write for the paper again, I’ll refrain from sharing some of that content here.

Personally, it came down to MTSU and WKU as the two schools of choice for me when deciding on a college. MTSU is a great school. I know a lot of successful people from there, but I’m happy with the decision I made to come here.

There’s even a bit of unintended rivalry in what you’re reading. MTSU’s student paper is called Sidelines, the same title as this column.

There’s a numerous amount of battles to pick with these two schools. Just make sure you pick wisely and study up on it before you choose.

“A lot of these guys don’t even understand the whole Middle Tennessee rivalry,” redshirt senior quarterback Brandon Doughty said. “I kind of have been trying to explain it. Even our coaching staff, coach (Justin) Lovett today was like, ‘Man, I don’t even know what the heck anything’s about with this Middle Tennessee thing.’”

Yep, there’s not one coach on the WKU coaching staff that has any prior experience with this rivalry.

So for the coaches and you young students, there’s reason, if you’re a fan of either school, to hold a grudge against the other.

The last time WKU and MTSU played two years ago, the Blue Raiders left WKU with a 34-29 win on a Thursday night. Even though MTSU finished the year 8-4, one game better than WKU, it was the Hilltoppers who went to a bowl game while MTSU sat at home during the holidays.

Fast forward to basketball season: MTSU came back to Bowling Green for the last regular season game in Diddle Arena. I sat on the floor with a camera during that game, right in front of the student section, and thought on several occasions that if WKU were to win, they would storm the court. That didn’t happen, as the Blue Raiders, who were the best team in the Sun Belt at the time, beat WKU 70-62 in front of 7,326 fans.

As history would fare, WKU did its little ‘four wins in four days’ skit again while MTSU was put out of the Sun Belt Conference Tournament. It was WKU dancing while MTSU watched from home.

That script flipped last year with MTSU jolting to Conference USA a year before the Hilltoppers. WKU went 8-4 in football with no post-season. MTSU went 8-4 and went to a bowl game. This year, WKU’s basketball tournament magic ran out while MTSU advanced to the NCAA Tournament.

After a year off, the rivalry is back.

“It’s good to get them back on the schedule for us and for the fans,” senior tight end Mitchell Henry said. “It’s a good rival. They’re right down the road and it’ll be a big game for us.”

Sure, the winner gets bragging rights for a year. More importantly on the field, it’s the first conference game of the year for both teams.

But even more important than that, there is unity in the midst of rivalry, and it’s something I hope you all considered this week.

Rivalries bring the blood, sweat and tears out of the game. This week, fans had the opportunity to give one of those items.

WKU and MTSU fans competed this week to save lives during the American Red Cross blood drive. It’s an annual tradition where the two schools compete to donate the most blood with the winner announced during the game.

I gave, and I hope you gave blood this week if you’re able. If not, I encourage you to next time. It’s the best way for you to not only help save lives, but show your allegiance to whatever school you root for on Saturday, and help make this rivalry what it is.

Whether you gave or not, pack up your cars and drive that 100 miles down I-65. I’ll see you at the game.