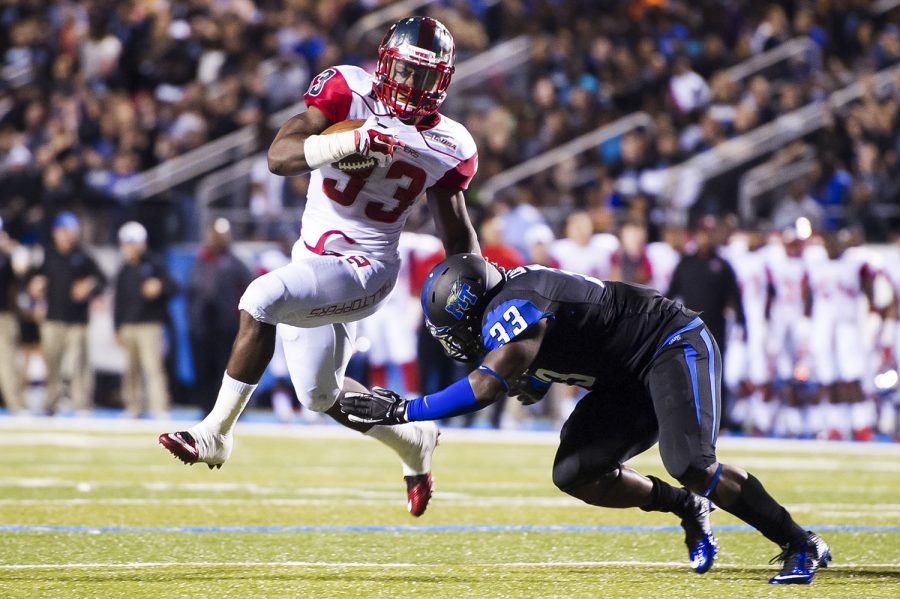 Replacing names like Bobby Rainey and Antonio Andrews isn’t something just anyone can do. Junior running back Leon Allen has been tasked with that challenge, but it hasn’t been easy.

Allen has slowly, but surely, done a solid job as the Hilltoppers’ premiere ball carrier. His performances, however, have been overshadowed by the passing game that’s putting up 461.5 passing yards per game.

He’s quietly moving into the role, which really suits his style. Allen’s not the guy that either Andrews or Rainey was — the one who piles up stats in the all-purpose category and sets school records in two years.

No, he’s not that kind of running back yet.

Andrews was a workhorse who got stronger as the game progressed. Rainey was an elusive back who was made to fit in Willie Taggart’s power offense.

Head Coach Jeff Brohm’s offense doesn’t require a specific skill set at running back because it’s tailored to the passing game. The running game is steadily getting better. Even though Allen has produced the numbers, similar to Andrews’ at this point last season, he has flown under the radar as a running back.

Allen did all that carrying the ball 34 more times than Andrews. Part of Andrews’ success was because he had a solid backup with Allen, who was able to give him rest when he needed fresh legs. Allen was good as a reliever through those games with 31 carries for 191 yards.

Take all those numbers and come back to the reality of this year. To keep up these same results, Allen is carrying a lot of the workload himself.

He’s performing at a high level, but football has shown us all in recent years that running backs don’t last forever. Allen may be durable enough to handle all the carries himself, but that’s not an experiment this coaching staff wants to try. So they need backup, which they haven’t had an easy time finding until, perhaps, Saturday.

While Allen averaged 27 carries per game before the bye week, he only carried 17 times and managed to gain 102 yards rushing.

Sophomore running back Anthony ‘Ace’ Wales was the contributing link with 14 carries for 60 yards. That assistance for Allen jumped his average of 4.1 yards per carry, through three games, up to 6 average yards per carry in the Navy game.

That’s a stat the coaches have to love, but it still wasn’t enough in their eyes.

“It was good to see,” Brohm said on Monday. “We definitely wanted to get Ace in the mix. We felt that if we could keep Leon fresher, that he would be a little more effective. I think that definitely was the case.”

I bet Allen was happy to see that, and I bet his legs were, too. In the season opener against Bowling Green, Allen had 28 carries, while the next running back had eight. At Illinois, Allen rushed 24 times and the next man up only once. Then, at MTSU, Allen carried 30 times, while Wales had just three touches.

Allen is proving he’s able to get the job done, and Wales is slowly becoming the back the team needed four weeks ago.

“Ace played well,” Brohm said. “He gave us a little spark, but after the film, I think he could have played a little bit better. He could have run a bit harder, but he definitely gives us a different back, a different dimension.”

Brohm has said over the course of the season that he wants to get other running backs in the mix, like freshman Joe Brown. The only way that could happen, in my opinion, is if WKU continues to have games where Allen is touching the ball 25-plus times.

Until then, if Wales can solidify his supporting role for Allen, on the stage next to redshirt senior quarterback Brandon Doughty’s arm, the run game may have something going for them.

If this trend carries over, Allen’s role won’t be quiet any more.