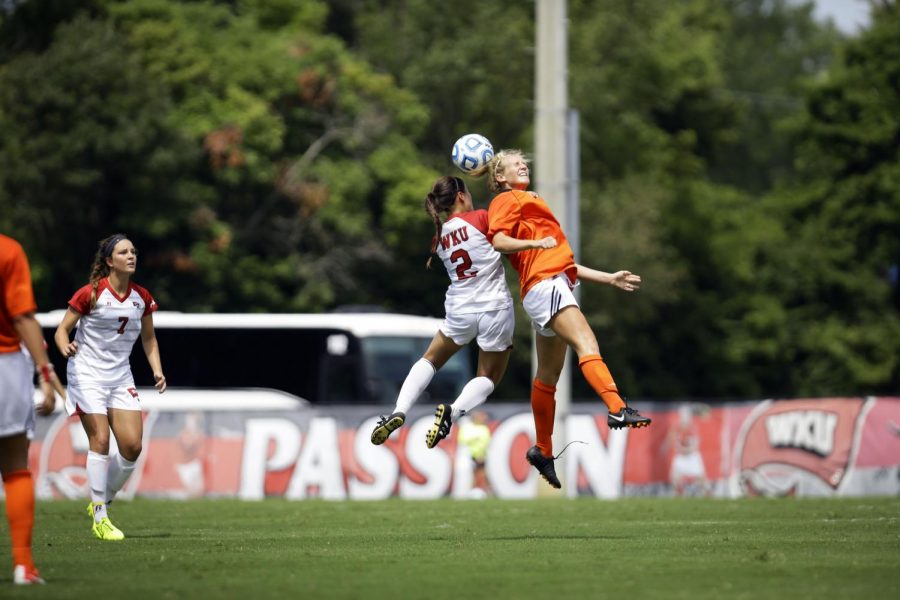 WKU midfielder Hannah Chua (2) battles for possession of the ball against a Mercer player Sunday in a non-conference matchup in Bowling Green. WKU would go on to win the game 1-0. Luke Franke/HERALD

Freshman forward Bria Mosley’s goal in the 68th minute of Sunday’s game between WKU and Mercer proved to be the difference as the Lady Toppers won, 1-0, at the WKU Soccer Complex in the team’s second game of the season.

The Lady Toppers’ starting lineup featured five freshmen and just four upperclassmen. The team is filled with young talent, as 18 of the 22 players are underclassmen.

“Our youth has been exceptional,” Head Coach Jason Neidell said. “They have really stepped up to the challenge and have done so in a very mature fashion. They are some of our most exciting players to watch play.”

Neidell was impressed with freshman Andrea Larson and commented on Mosley’s help with winning the past two games.

Mercer jumped out early on the Lady Toppers, as they controlled possession and managed some quick shots on goal. However, it didn’t take long for the Lady Toppers to swing momentum their way as they finished the half with nine shots to Mercer’s three.

WKU had opportunities in the first 45 minutes, but the Lady Toppers couldn’t capitalize, resulting in a 0-0 tie at halftime.

The Lady Toppers opened the second half aggressively and in the 68th minute sophomore midfielder Haley Baldridge was able to assist Mosley on a long score from roughly 25 yards out.

“Before I came in the game, coach Jason and coach Dustin told me to keep using my speed and when I saw Haley get the ball, I just started running and started holding my line so I wouldn’t run offsides,” Mosley said. “I saw my shot, pulled back and just gave it some touch and kicked.”

According to Neidell, the Lady Toppers got a little content after Mosley’s goal. For the remainder, Mercer won the battle over possession of the ball and had several opportunities to tie the match.

“Psychologically, after you have been playing pretty good and you have been pressing, pressing and pressing and you finally scored, you kind of let your guard down. They also pushed a lot of players forward and we didn’t do a very good job of adjusting to that,” Neidell said.

According to the team’s lone senior Allie Auscherman, the team’s energy out of halftime was the difference despite the lack of effort following the goal.

“I think we did pretty well,” Auscherman said. “There were some ups and downs in the game. After the half, I thought we came in with some really high energy which helped lead to our goal. We kind of let down after the goal but we were able to hang tough and get the win.”