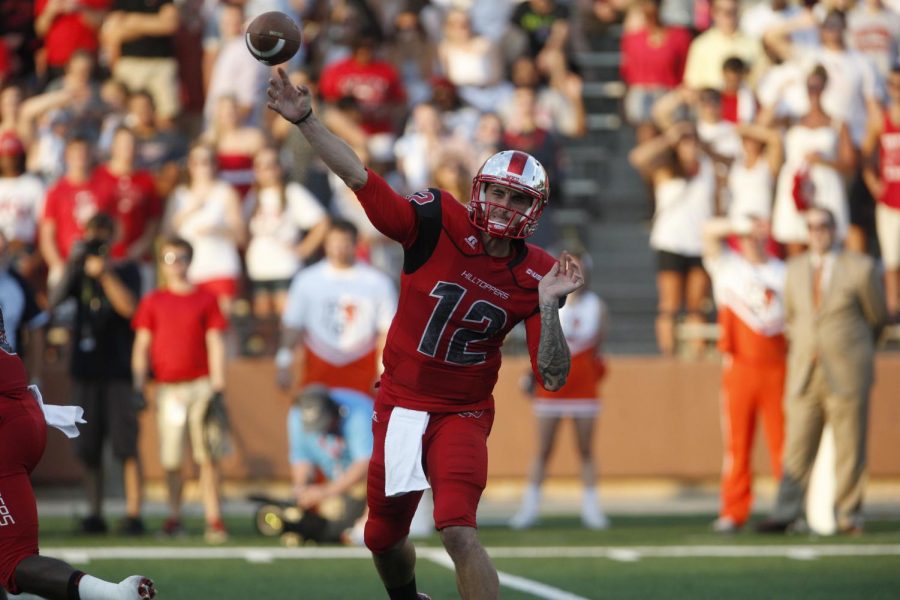 WKU came into Friday’s season-opening matchup with Bowling Green State as an underdog, but it didn’t get the memo.

The Hilltoppers walloped the Falcons 59-31 and shattered several program records in the process.

First-year Head Coach Jeff Brohm’s offense racked up 708 total yards and 59 points – both program records – and did it efficiently, running 96 plays without a single turnover and converting 7-of-7 red zone opportunities.

“Couldn’t be happier,” Brohm said. “Great coaching job by our coaches, great job by our players. Just completely executed everything we called. Played hard the entire game, played together. Responded when the other team scored…that was outstanding.”

Redshirt senior quarterback Brandon Doughty completed 46-of-56 passes for 569 yards and six touchdowns – all single-game school records. He finished with a passer rating of 202.9.

“He’s a guy that’s an accurate passer,” Brohm said. “If you can give him some plays where he can just get the ball out of his hands, he’s going to be accurate with it…if you can get him in a rhythm, get him some completions, he’s going to get in a groove.”

WKU’s 702 total yards was made possible largely due to its success with screen plays.

The Hilltoppers scored three times via screen passes to Taywan Taylor, Antwane Grant and Willie McNeal for 55, 34 and 9 yards, respectively.

Brohm mentioned afterwards that getting the ball to receivers quickly in space was key, and when BGSU put more pressure on, the Hilltoppers were able to throw the ball up the field.

“I knew that we probably were putting up some yards because, really, we were doing a great job of getting yards after the catch,” Brohm said. “A lot of that had to do with them, but a great job by Brandon getting the ball quick before the defender got to them.”

Taylor was the primary beneficiary of the Hilltoppers’ up-tempo style. The sophomore receiver tallied 12 catches for 185 yards and a score.

“It shows how far we’ve come as an offense,” Taylor said. “It shows all the hard work we put in all summer, all spring, and it just all paid off tonight. We just came in with one goal and that was to win.”

“Our players love playing fast,” Brohm said. “They have the system down. We’ve been going at it ever since I took over…it definitely can be an advantage. Sometimes that’s going to get shut down. We feel like they executed it well today.”