WKU falls in doubleheader against FIU 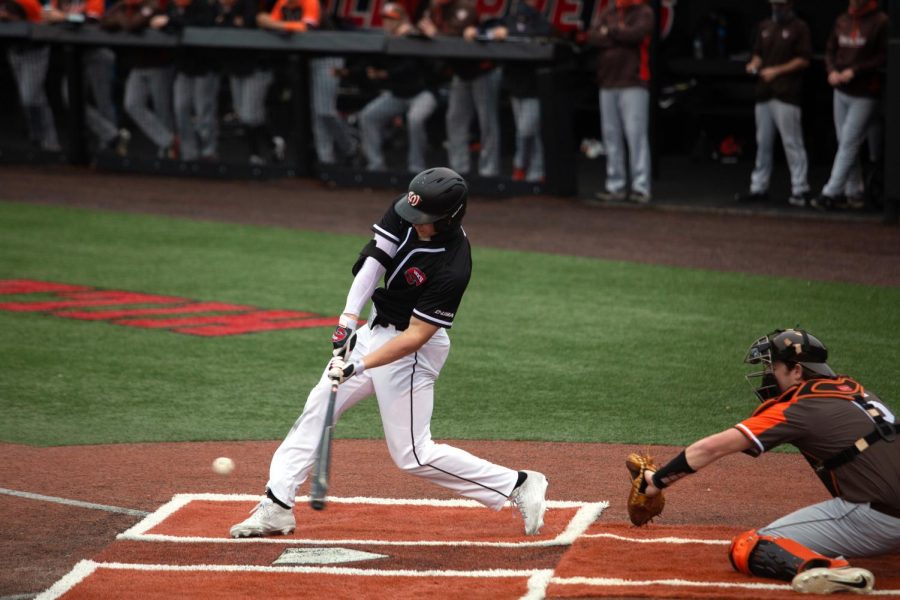 WKU pitcher Jackson Gray (51) swings at a pitch during the game against the Bowling Green Falcons at Nick Denes Field on March 12. WKU won 4-3 in the 10th inning.

Freshman RJ Ibanez went 1-for-1 hitting the walk-off single to win game two, taking a 2-1 series lead over the Hilltoppers.

“I thought our starting pitchers did an outstanding job,” head coach John Pawlowski said. “Sean [Bergeron] was outstanding in game one, and then you look at Devyn [Terbrak] – he only had 60-some pitches going into the last inning. We just, offensively, weren’t able to come up with big hits today. It’s just one of those things where we’re in both of those games – a hit here or there could be the difference – and it certainly was, but just not in our favor today.”

Junior Sean Bergeron got the start for WKU in game one of Friday’s doubleheader. He tossed for 5.2 innings allowing two runs with three strikeouts.

Redshirt junior Tyler Myrick got the start for FIU in game one of the doubleheader. He pitched for six innings allowing two runs with five strikeouts.

In the top of the second frame, WKU loaded the bases on a walk and back-to-back singles by sophomore Jackson Swiney and redshirt freshman Ty Crittenberger. Myrick got himself out of the jam with a double play followed by a ground out. FIU had nothing to show for in the bottom of the second frame.

Both teams went three up and three down in both the third and fourth inning. Both pitchers combined for five strikeouts and five hits at the end of the fourth inning.

In the top of the fifth frame, Crittenberger walked to lead-off for WKU to become the first batter in two innings to get on base. He advanced to second base but was left stranded. In the bottom of the fifth, FIU went three up and three down in the third consecutive inning.

In the top of the sixth frame, WKU loaded the bases with two outs from a single by sophomore Jackson Gray, a double by graduate Davis Sims, and a walk from Myrick. Crittenberger struck out to leave all three WKU runners stranded on base.

In the bottom of the sixth frame, FIU got the bats going with a triple from Odina. Odina scored the first run of the game on a sacrifice fly from redshirt senior Derek Cartaya. After a single, redshirt senior Luis Chavez hit an RBI double to make the score 2-0 FIU.

Then WKU made a pitching change going to sophomore Wil Moritz for Bergeron. Moritz got WKU out of the sixth inning, but not before FIU tacked on another run on an RBI double from redshirt junior Justin Farmer. FIU led 3-0 after six innings.

In the top of the seventh frame, junior Justin Carlin doubled following a walk to put WKU runners on second and third base. Then sophomore Matthew Meyer hit an RBI single with no outs to cut the FIU lead to 3-2.

Sophomore Devyn Terbrak made his fourth start on the mound for the Hilltoppers to start the second game on Friday. He went on to toss for six innings while surrendering two runs.

Graduate Garrett Rukes started for the Panthers to close out the doubleheader. He tossed for six innings allowing one run with eight strikeouts.

In the top of the first frame, Carlin gave WKU an early lead 1-0 with his first homerun as a Hilltopper. Terbrak allowed two hits and one run to score. Ondina scored from third on a fielder’s choice to knot the game up at 1-1.

Through the fourth and fifth innings, both teams had zero hits and one person on base combined. Rukes had seven strikeouts, while Terbrak had two strikeouts going into the sixth frame.

In the top of the sixth, Wilson singled for the first hit since the third inning for both teams. He was left stranded on second after strikeout. FIU went three up and three down to end the sixth inning of play.

Freshman Adrian Figueroa doubled to lead off the bottom of the seventh. Then WKU made a pitching change going to redshirt junior Bailey Sutton for Terbrak.

FIU then loaded the bases after a hit by a pitch and a single from Farmer. RJ Ibanez then hit a walk-off single to win the game 2-1 for FIU.

Up next  WKU will finish their first C-USA road series against FIU on Saturday at 11 a.m.