EDITORIAL: Tuition increases are not the solution to budget deficits 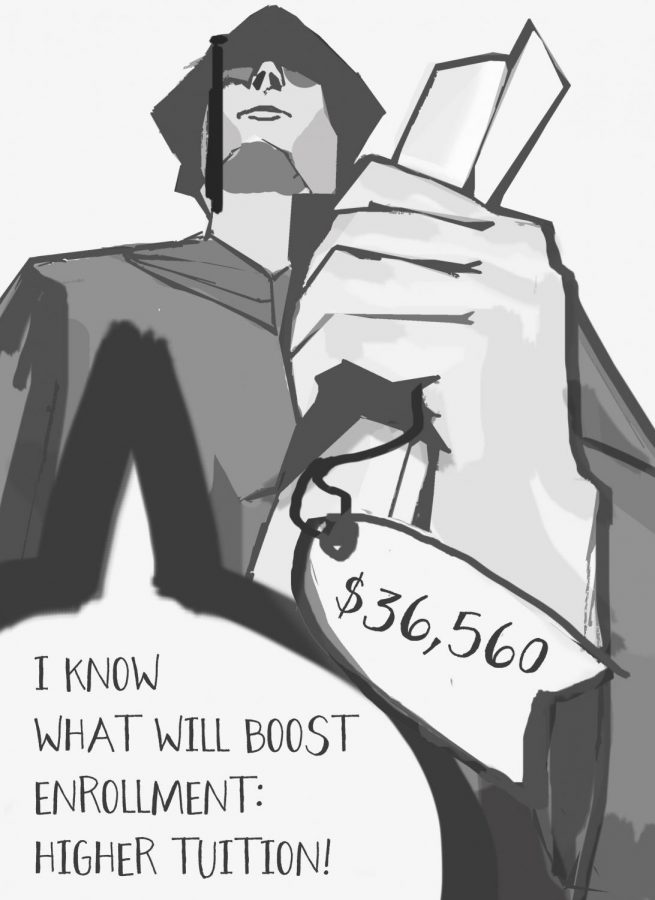 THE ISSUE: The Board of Regents announced a 4.8 percent tuition increase at its meeting on June 27.

OUR STANCE: While budget deficits are very difficult and it’s hard to choose where to make cuts, it’s not fair for students to have to take on that burden.

At M.A.S.T.E.R. Plan, President Gary Ransdell lectures just-arrived Hilltoppers on the importance of graduating in four years. He leads a pledge where students promise that they will be out of the Hill in four years and into the bountiful, scary so-called real world. Fifteen hours every semester, he says, and you are out the door with a new lease on life and a WKU diploma. There is no reason why the new Hilltoppers shouldn’t graduate after four years.

Ransdell fails to mention the uphill financial battle that students might have to deal with — the rise in cost of tuition.

In the past ten years, the annual cost of attending WKU has doubled. Just three years ago, when incoming seniors took the pledge and wore the grey M.A.S.T.E.R. plan shirt while promising the president of their desire to graduate on time, tuition was $4,042 per semester. After a recently-announced 4.8 percent increase in tuition, this upcoming semester will cost a pretty $4,570.

The Herald editorial board knows that this isn’t a WKU-exclusive problem. Universities nationwide are undergoing budget problems, many because of a lack of state or federal funding, similar to WKU. The University of Kentucky’s undergraduate resident tuition is currently $5,232, according to its website. In the 2012-2013 school year, it was $4,838. The University of Louisville just approved a 5 percent tuition increase in May, according to The Courier-Journal.

But still, this doesn’t make raising tuition right, or fair, to students. Let’s start with the FAFSA, which students filled out a full six months ago. The FAFSA takes tuition costs into consideration, and applicants indicate an overall financial need when they apply. Now, those students are a few hundred dollars short, which is certainly not pocket change.

Or let’s discuss the many students who plan down to the dollar before and during the semester and scramble to get scholarships (if they are really lucky), grants (if they are lucky) or low-interest loans (still lucky) in order to attend WKU. An extra 4.8 percent throws a curve in these plans.

Of course, we acknowledge that it is extremely hard to deal with budget shortcomings like WKU is having to. The cut in state funding puts a hurting on everything, and whatever move the university makes is likely to be criticized. Last year, the budgets for the Institute for Citizenship and Social Responsibility and the ALIVE Center were merged, deep cuts were made to the Talisman yearbook and the Faculty Center for Excellence in Teaching’s budget was done away with completely. None of these cuts were met with positivity, to say the least.

While budget cuts are never pleasant, cutting academic programs that have shown a significant decline in interest, or ceasing to create new majors and minors that don’t generate widespread interest, could be better options than increasing students’ tuition.

A steep tuition hike might just be the worst way to deal with these budgetary concerns and with tuition making up half of WKU’s budget, a lot is riding on making sure enrollment doesn’t continue to decrease. Putting the burden on the backs of your own students (we don’t have that much money to begin with, we promise) hurts and certainly won’t help those enrollment numbers.

Hopefully we won’t see enrollment drop for the second year in a row. But given the amount of respect the administration holds for students’ wallets, why wouldn’t it?

Bring up the soaring cost of tuition at WKU to any student, and you will start to hear a familiar tone: Why did we need to make DUC look like a palace? What’s up with this new Honors College building? Wait, HOW much was the football coach getting paid?

Technically, many of the expenditures that students complain about are from different revenue and funding streams, not from tuition. Still, the message is being sent loud and clear: Oh, sorry, WKU students, we’ll need an extra 4.8 percent in tuition next year, but look at this WKU-personalized grand staircase!

Thanks. But we’ll take the lower tuition, please.