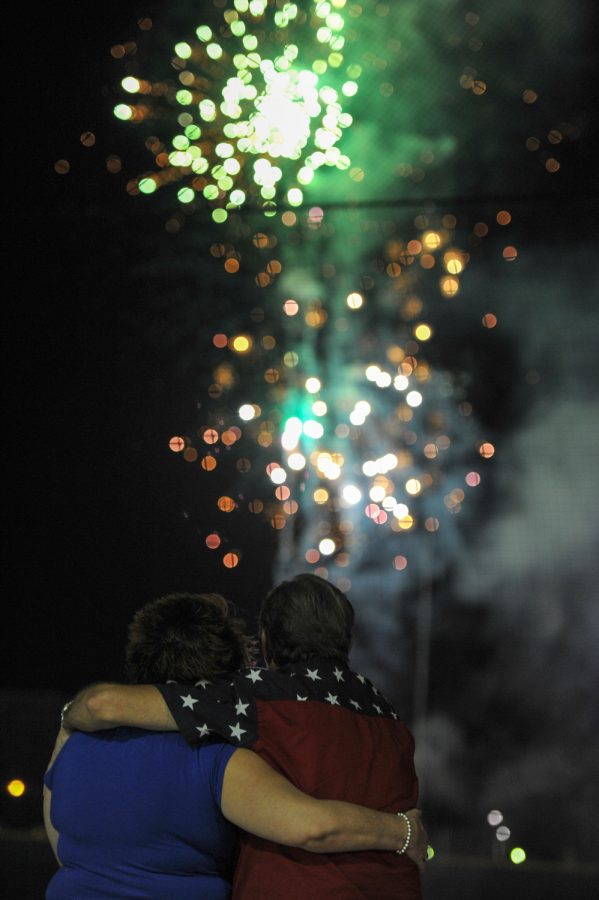 A couple hugs each other as 4th of July fireworks go off at the Bowling Green Hot Rods stadium on Friday. Jeff Brown/HERALD

Independence Day was celebrated wholeheartedly in downtown Bowling Green this year. Organized by The District, an organization that promotes businesses and downtown life, the BB&T 4th of July Block Party featured lively crowds, plenty of music and booming fireworks.

This event was geared toward bringing the Bowling Green community closer and encouraged the patronage of local businesses.  Natalie Boddeker and Tonia Johns, co-owners and operators of Zest!, a fairly new juicing business, said the event was a success for their business.

“Many customers didn’t know about us but this event has helped to get the word out about the product,” Johns said. “It helps that it was a hot July day—we were banking on people getting thirsty.”

“We’re pretty new, but we’ve made a lot of new connections,” Boddeker said.

There was no shortage of families sprawled out on the Circus Square Park lawn, basking in the sun and listening to music performed by Soul House, a local cover band.

Nancy Shores of Bowling Green brought her two young daughters to the event and was surprised by how much they were enjoying the festivities.

“There were games for the kids and free balloons. That, plus the music and beautiful weather has really made this day amazing,” Shores said.

Of course, the festivities didn’t end once the sun set.

The Bowling Green Hot Rods, despite losing a close 3-2 game against the Dayton Dragons, were not deterred and put on a nearly 10-minute firework show.

Once the fireworks faded, the party continued at the patio of the new Hitcents Park Plaza, the new home to Mariah’s restaurant.

Sleeper Agent, a band that gathered in Bowling Green, put on an energetic show that attracted a large audience. WKU students held a strong presence at the show, proudly wearing their university gear.

“I’m a new fan, but super pumped for the show,” she said

“We skipped the Hot Rods game and came for fireworks and the Sleeper Agent show,” Billingsley said.