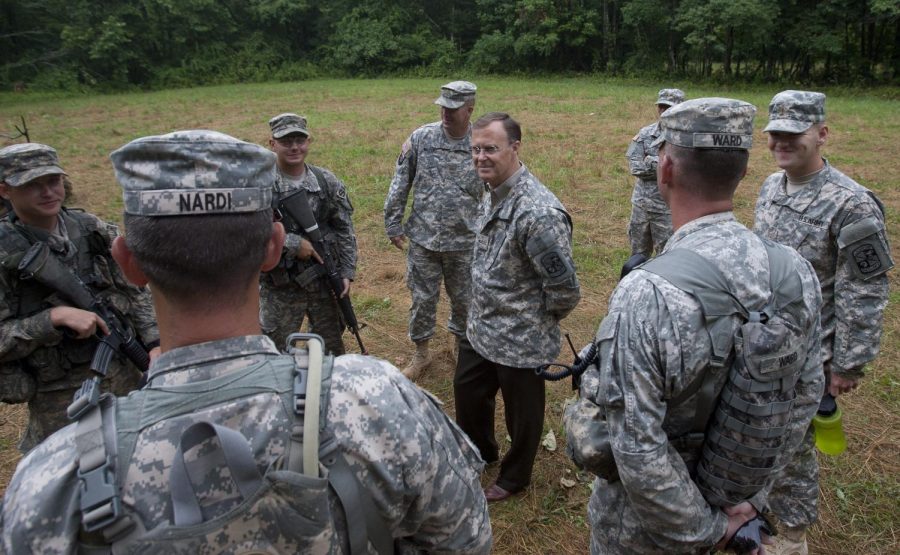 He parked right outside the heavily-guarded gate. After getting out of the car, President Gary Ransdell reached into his backseat and pulled out a customized camouflage jacket, complete with a WKU patch.

Ransdell visited WKU ROTC students at Fort Knox today to check in during their Leader Development and Assessment Course.

The month-long training is the final step before they’re officially second lieutenants. Ransdell made the trip in order to see the education his students were receiving away from WKU.

“This is a good affirmation for me to actually see what skills they’re learning and how to apply them,” Ransdell said. “They’re learning confidence in real-life situations, how to deal with adversity, how to approach an enemy and how to ensure safety for each other and consequently, our nation.”

There are 28 cadets from WKU going through LDAC this summer. During the training, the students learn to rappel, fire machine guns and even enter a tear gas chamber.

Ransdell visited Indianapolis senior DeWayne Cox and Scottsville senior Scott Shelton during their final platoon operations training. The two spent Tuesday night sleeping in the woods during a thunderstorm. Ransdell trudged out through the mud to meet the cadets at the site of their training.

“I feel pretty honored,” Cox said. “I wasn’t expecting anything like this at all. Especially somewhere out here in the field in the middle of the woods soaking wet.”

The ROTC program pays for cadets’ college tuition. For WKU students, their room and board is also paid for by the school. Ransdell sees the arrangement as a fair trade for the academic success ROTC demands from its students.

“40 percent of their evaluation as cadets is their academic GPA,” Ransdell said. “They first have to perform in the classroom then exercise their military training and skills. Without academic strength they’re not going to be the leaders our military needs.”

Waiting for Ransdell at the gate to the fort was Maj. Stephan Walters, the assistant professor of military science at WKU. He helps organize the ROTC program, but Ransdell initiated the planning for this visit.

“A couple other presidents are here today, mostly from Tennessee schools,” Walters said. “They’re here to meet-and-greet key leaders to work political stuff at that end. That’s fine, but President Ransdell’s defined intent was to talk to the students.”

After meeting the students, Ransdell listened in to their end-briefing from the combat raid they’d just finished rehearsing. He asked a group of lieutenants questions about the methods used to teach the cadets leadership skills.

All were WKU students who graduated in May and now work to train their previous colleagues.

“It’s one thing to commission them and wish them well,” Ransdell said. “It’s quite another thing to have a better feel for the actual training that they endure and the leadership skills that they acquire as ROTC cadets. It gives me great confidence that our students are learning the right things.”

As Ransdell packed up to leave, the WKU alum handed him two Army-issue meals, ready to eat. He took them with a laugh.

“We’ll have these for dinner tonight, me and my wife,” Ransdell said. “She’ll be real excited when I say I’ve got dinner coming.”