The anatomy of Brohm: Jeff Brohm’s background prepares him for success as head coach 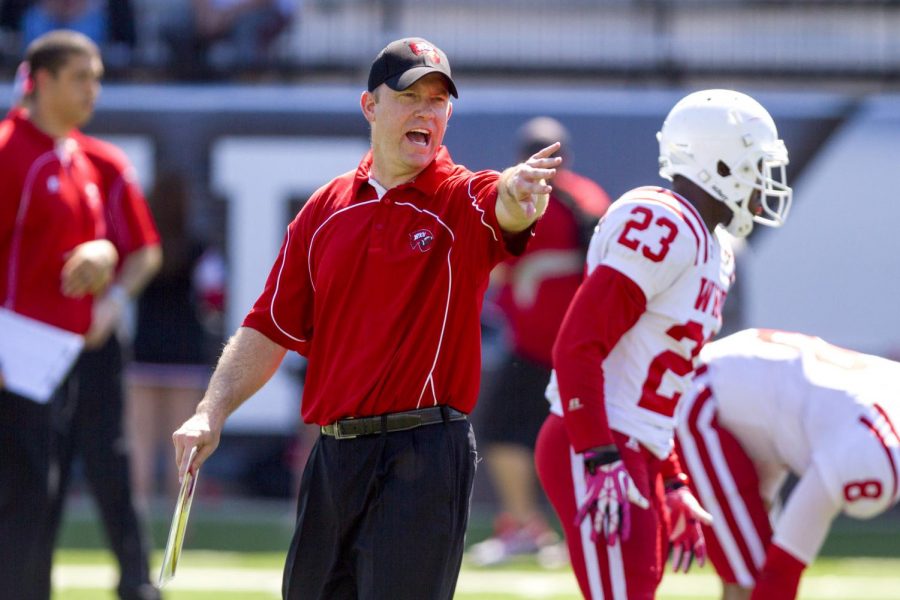 The wave of responsibilities that come with a head coaching title didn’t completely overwhelm his body, just enough to keep him up throughout the night.

He had anticipated this whirlwind for years, but now reality had awakened him.

He came to WKU knowing this moment would come eventually, he didn’t think it would happen this fast.

In a matter of a few days, he went from a serving role in his third offensive coordinator job to being introduced into his first head coaching position, but that was the plan all along.

“I came here with a purpose to not only get back with coach (Bobby) Petrino and helping get Western Kentucky to win, but there was a reason I came here,” Brohm said while relaxed in a chair in his new head coach’s office in Smith Stadium. “I knew things could be volatile and change at any moment. I had opportunities to go elsewhere and decided not to, and I think it paid off. This is obviously something that I wanted to do and I’m glad this opportunity is here, but it came about fast and I had to be ready when it did happen.”

Brohm had a 12-month audition for the job beginning when former coach Bobby Petrino hired him as offensive coordinator/assistant head coach in January 2012.

While the Petrino hire was popular, skepticism emerged with his name as one who would jump to a larger school when the door opened.

After 13 months on the job in Bowling Green, Petrino jumped to Louisville, opening the door for the apprentice in waiting.

“(Petrino) told me on numerous occasions even before (the Louisville opening) came about, but it was after the season when some other things came about, but he told me, ‘you’re ready to be a head coach, I just want you to know that,’” Brohm said. “He doesn’t come out and say that a lot, but he said, ‘hey, you’re ready to be a head coach when that happens.’ I felt good about it, so when this opportunity came about he said it was what I needed to do and it was a great opportunity for me. So I think his reaffirming to me and his belief in me has really helped me feel confident in taking over.”

Brohm was an intrical part of Petrino’s offense that broke records for total yards in a season (5,502) and yards per game (458.5). It’s because of his major involvement that has made WKU’s third coach in three years a seamless transition, but at the same time a more pleasing transition.

The difference between Petrino and Brohm on the field is absent, but off the field paints a whole new picture.

“I probably have a little more of a personal approach and I think with my demeanor and personality, I feel comfortable with where I’m at,” Brohm said.  I think it fits with our guys and it fits with a lot of things right now, so everybody is a little different and they have different strengths and weaknesses so my ability to relate to people and get to know them and try to be a positive influence with everybody I come across is a plus.”

It’s that same attitude and favorable persona that has the state buzzing about what the hometown kid from up the road can do.

The Brohm name is a stamp in Louisville with Jeff and his two brothers Greg and Brian, along with his father Oscar all playing football at Louisville and at Trinity High School.

Brohm’s presence at the Kentucky Derby last weekend was different than his approach from his previous years. It’s a tradition he hasn’t had the privilege of practicing due to assistant coaching jobs far from home.

This year many members of the football staff – including his brother, Greg, who now serves as the director of football operations – stayed at the Derby for several days.

“A lot of people were coming up to him, congratulating him, patting him on the back saying they now support Western Kentucky,” Greg said. “While they maybe didn’t pay attention before, now they’re paying attention and they’re rooting for him.

It’s a win-win scenario for Kentucky – according to WKU athletics director Todd Stewart. Petrino’s hire with the Toppers put WKU on the map, and Brohm is maintaining that continuity while Petrino is back to a place he calls ‘home’ in Louisville.

“I think one of the best things about hiring Bobby Petrino was that it gave us an identity outside of south central Kentucky,” Stewart said. “I think Jeff has continued that. I think the Brohm name is well known, certainly in Kentucky from his accomplishments as a high school athlete to playing in Louisville, and the family.

“He’s given us identity. I know that high school coaches relate very well to him. We recruited the state of Kentucky very well this year, probably better than we ever have. He’s been great representing the program off the field.”

He has a couple of months on the job, a signing class that includes 10 players from Kentucky, and a full spring practice under his comfortable belt now. His grip remains tight on the program, his pursuit to teach the student-athlete the importance of succeeding academically, athletically, spiritually, and through personal growth is a foundation set in stone.

“I think it’s been an ongoing every day process,” Brohm said. “I’m a little more comfortable in it right now. I have a pretty good idea of what needs to be done, what we need to do on a daily basis and how we have to improve the team in all elements. All the things that come with it have become a little more natural now and I have a better fell with what needs to take place.”

The anatomy of Brohm comes from a diverse coaching mentorship that includes a list of hall of fame coaches – each of which have expressed some form of approval for the rookie head coach.

But more than anything for Brohm, family matters. When the Toppers take Fiex Field against Bowling Green State in August, Brohm will lead his extended family on the field as the head coach of a dream job – take it from the family.

“He loves it here,” Greg said. “If he could have picked 10 years ago a fit for a first head coaching job, this would have been the place he would have picked. It’s perfect for his situation. It’s perfect for his personal style. It will allow him to make good decisions and I think Western is that only opportunity that you can only dream of where the program is blossoming and help take it to new levels. I think it’s the perfect situation for him.”