Graduates begin their lives beyond the Hill 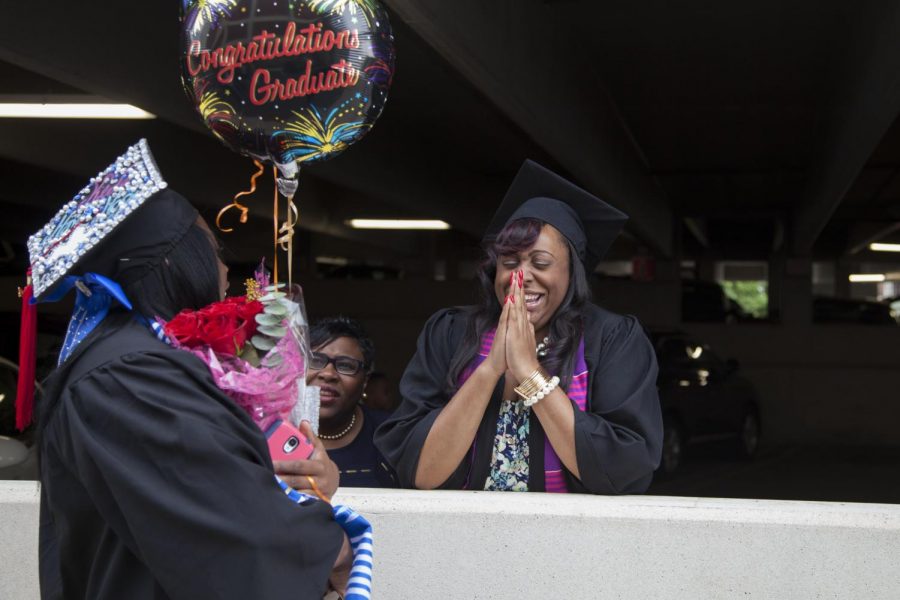 Keira Martin of Louisville (left) laughs with Brandi Beckham of Lexington (right) after WKU's commencement ceremony for the Potter College of Arts and Letters and the University College Saturday, May 17, 2014, outside E.A. Diddle Arena. (Mike Clark/HERALD)

The students commemorations were part of the 175th Commencement ceremonies for WKU, which wrapped up today in E.A. Diddle Arena.

Tacora Busch, of Cincinnati, was among the 1,665 undergraduate students who received their diplomas. Busch feels ready to begin her life after WKU.

“I had some great professors,” she said. “I think I’m truly prepared.”

Busch graduated with a degree in sociology.

“I want to open up a center where I can teach people their civil rights,” she said.

President Gary Ransdell, who delivered the commencement speech, encouraged students to follow their dreams and think for themselves regardless of how others might try to influence them.

“Listen to your heart,” he said. “Your heart is the best career counselor there is.”

Ransdell reflected on the commencement speech he heard 41 years ago as a WKU graduate in the class of 1973. He imparted advice of his own to graduating students ready to begin their lives.

“Find things and people that you care about and invest in them with your heart and your body and your soul,” he said.

Ransdell recognized all the students who kept their promise of graduating in four years, by showing a photo of the graduates when they were freshmen gathered on Smith Stadium’s field during the MASTER Plan opening ceremony. The freshman spelled out 2014, signifying the year they would graduate.

The audience also viewed a video of student life on WKU’s campus. The video showcased several memorable events from their time on the Hill.

After President Ransdell’s speech, 10 WKU graduates were sworn into the U.S. Army and received a standing ovation from the audience.

Brandi Beckham, of Lexington, who received a degree in broadcasting, said she’ll miss the WKU atmosphere.

“WKU has shaped me into the woman I am today,” she said.