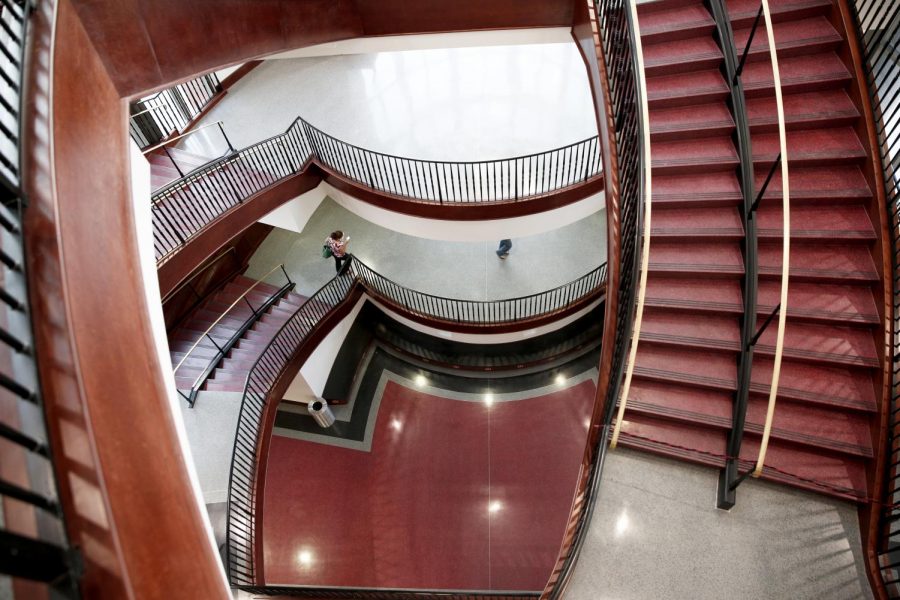 The stairs in Downing Student Union is the latest completion to the university center. DSU has been semi-closed since 2012, taking away a centralized location for the student body. (Tyler Essary/HERALD)

When Downing Student Union opens in the fall, it will be the end of a two-year, $50 million renovation project. In the process, students have watched fences go up and construction commence in two phases.

The center has operated at half-capacity; portions of the building have been closed for renovation while other areas remained open.

DSU, once the hub for student life, has left many students feeling displaced on campus. This trend has seen the student culture at WKU shift over the past two years from energy to more aloof behavior.

“I think it did change the culture in that there was not centralized student life on campus, a place where students can hang out,” Student Government Association President Keyana Boka said. “I remember my freshman year. I remember the old DUC and how that was very familiar for everyone that being the student center and for so many different services being in that building. And they being fragmented and dispersed because of the construction.”

With construction underway, the university took the remodeling a step further when they changed the name of the university center from Downing University Center, or DUC, to Downing Student Union.

The name change has been hard for students to shake. Many on campus continue to call it by its original name.

For Louisville senior Denise Smith, the renovation process for DSU provided a noticeable change for the black community at WKU because DSU was one of the few places on campus where they were able to congregate.

“DUC was where we had our events,” Smith said. “It was a kind of homey place, there was the food place and the place we we could sit down. The international students have a house, the sorority’s and organizations have a house…We use DUC for everything. We have our pageants in their, chapter meetings, BSA (Black Student Alliance) meets in there, our forums are in there. Anything black students wanted to do, we used DUC for it. We’re already small in numbers. If all of us aren’t meeting in one place, the small numbers that we have are divided. It’s just harder to fellowship when we don’t have DUC.”

Students have created substitutes for lack of space on campus, moving to Centennial Mall, inside Mass Media and Technology Hall and over to the temporary structure in Topper Cafe to hang out, yet Smith says those substitutes don’t go far in recreating the same feeling DSU had.

“I don’t think we ever found a substitute — DUC was it and DUC was gone,” she said.

The lack of a fully functioning university center has even been felt for freshman students who don’t know what it feels like to have one.

“As a freshman in high school when I visited, I noticed there were so many people outside of DUC, but as a freshman in college I know there is no atmosphere like that on campus anymore,” Burskville freshman Kurtis Spears said. “Amongst freshman a lot of freshman don’t really know about DUC, they just know that it was called DUC and it used to be the old hang out place, but all that it is known for is Fresh and where they go to get their Starbucks.”

Despite the renovations, students agree there wasn’t a lot more that could have been done without closing the building.

Director of Student Activities Charley Pride has said he has heard the criticism and complaints from students about the renovations.

He said the number one thing he has received complaints over is the lack of meeting spaces on campus, a situation he said would be remedied when DSU reopens.

“We’re going from having nine meeting spaces in DUC to 16 rooms in DSU, so we’ll have a lot more space for students,” he said.

Pride was also confident that it won’t take long for DSU to go back to being the hub on campus once it reopens in the fall. He referenced a scenario years ago where then DUC got new chairs.