In My Skin: Student finds faith, healing in Wicca religion 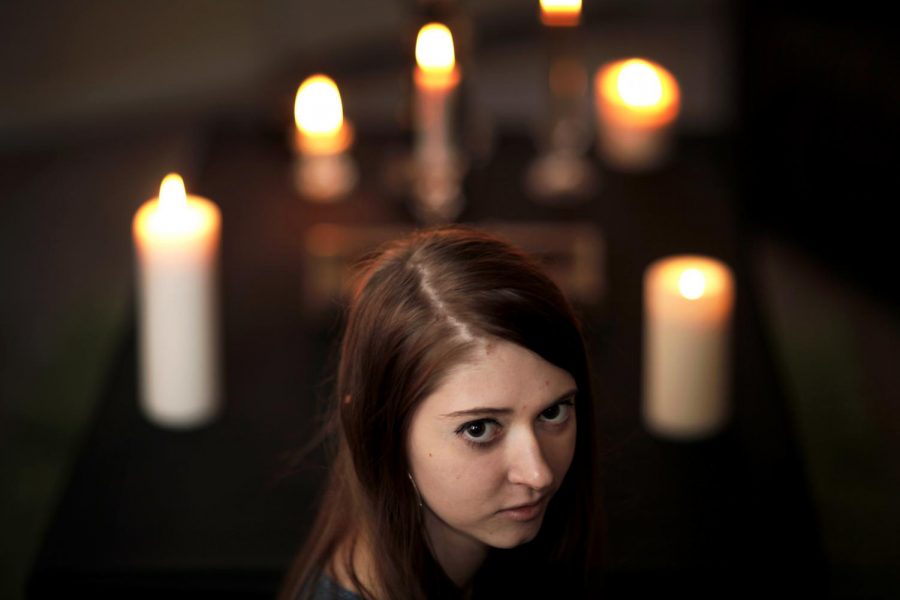 Elizabethtown senior Samantha Tackett has always felt a pull towards magic. “It made me feel better,” Tackett said. “I feel like sometimes that is the goal in Wicca. It’s different for everyone, but I want to feel in control." (Austin Anthony/HERALD)

Samantha Tackett gazed up at the full moon stained red by the sun.

With subtle whispers, the melodic words of an incantation left her lips.

“Bless this high priestess on this most sacred night. Send down your lunar shaft of power upon this circle.”

Tackett is a witch.

When she was 15-years-old she was assaulted by a man. The traumatic experience caused her to spiral into a dark period void of any mean of consolation and revealed that her Christian upbringing failed to offer any solace.

“I felt like God hadn’t protected me or spared me,” Tackett said. “It took away a lot of my control and I wanted to find a way to put that control back in my life.”

The Elizabethtown senior had always felt a pull towards magic. Her grandmother was a Wiccan, and although she had died when Tackett was young, her grandmother’s choice of religion stuck with her.

“Even though I didn’t know a lot about it through her because she died when I was 10 , I knew she practiced Wicca,” Tackett said.

“I thought, ‘maybe there was a reason she was a Wiccan,’ so I wanted to try and connect with her and I found Wicca.”

Wicca is more than spells and dark stigmas. Born in England in the first half of the 20th century and influenced by pre-Christian beliefs, Wicca became popular in the fifties and sixties.

The religion involves the ritual practice of magic and a deep connection to the earth. Wiccans believe in the presence of magical power and male and female deities within nature. Their rituals emphasize the seasons and the cyclical pattern of life.

After converting to Wicca, Tackett was desperate for her wrongdoer to meet justice. She began to dabble in dark magic. With anger and hurt fueling her, she uttered revenge spells directed at the assaulter. She will never know if her spells took but it provided her some relief.

“It made me feel better,” Tackett said. “I feel like sometimes that is the goal in Wicca. It’s different for everyone, but I want to feel in control. The revenge spells made me feel like I was getting justification.”

Tackett moved away from dark magic after her revenge spell.

“An ye harm none, do as you will,” the Wiccan rede states. “Ever mind the rule of three. What you send out comes back to thee.”

What you put out into the Karmic realm, you get back three fold.

“I got bit in the ass for all the dark spells I used,” Tackett said.

She then focused on using meditation and healing spells to overcome her internal battle. Her frequent nightmares and panic attacks caused from the assault began to diminish through using spells and grounding herself in meditation.

Tackett practiced Wicca for three years before she felt completely healed from the assault. Her mom, Pamela Tackett, believed Wicca helped her daughter.

“She needed something to turn to and it has helped her through a dark period,” Pamela said. “Thats the best thing.”

It was hard for Pamela to accept her daughters conversion to Wicca.

“I wasn’t sure how I felt and I had to learn more of what it was about,” Pamela said. “It hurt a lot for her [Samantha] to turn against Christian beliefs.”

Tackett is devout, despite the feeling of her family and the abounding negative connotations that come with the religion.

“When I tell people I’m a Wiccan they automatically think I’m a satanist,” Tackett said. “I don’t force it on people.”

When Tackett does a ritual, incense wafts through the air of her living room and candles light the room with an incandescent glow. Their smoke dances in swirls around her face.

Tackett clasps a stack of tarot cards with one hand. Slowly she flips them over one by one. The cards guide you Tackett said. They hold answers.

“I’ve never had the cards be wrong,” she said. “Magic is something you believe in that you can’t fully see but you know it happens and it can change your life.”