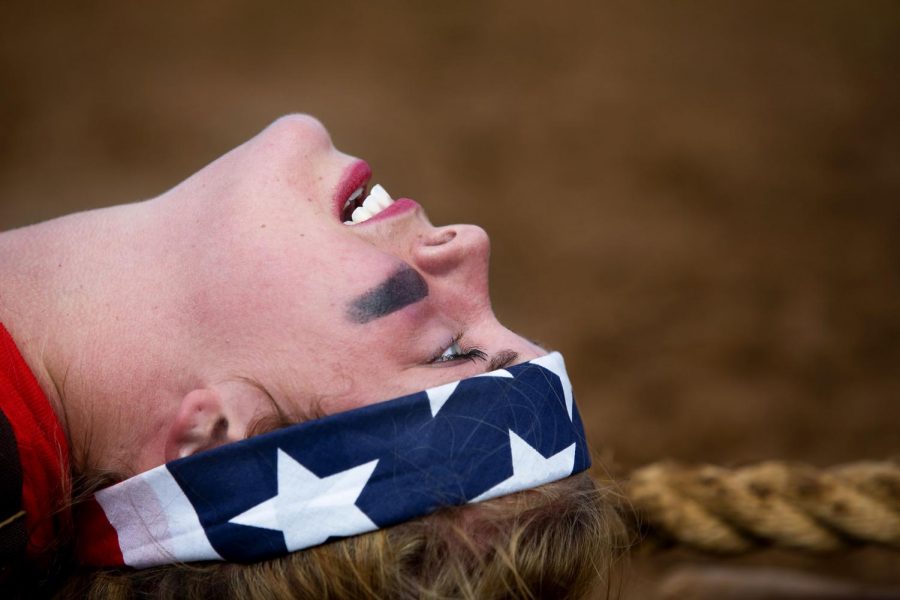 Several tuggers compared the anxiety and buildup of each pull to war on Friday afternoon at the L.D. Brown Ag Expo Center as fraternities and sororities battled it out during Tug.

Tug teams entrench themselves in a muddy pit and pull against one another for three minutes, and whichever team has more rope on its side at the conclusion of that time is the winner.

Louisville senior and DTD brother Nate Allen was on the rope for the first time this year.

“I feel like we could have done better, but AGR and Farmhouse are really good,” Allen said. “I think we gave it all we got.”

“The environment before [the pull] is the most scary and awesome thing at the same time,” Allen said.

Although most fraternities and sororities take the event seriously, the brothers of Sigma Nu and Sigma Alpha Epsilon provided some comic relief for the afternoon. SAE’s team members pulled in blazers and shorts while holding a cigar in one hand.

Sigma Nu tried a different approach to the pull. During their pull against Farmhouse, the team members switched places on the rope.

The members in the back hole ran to the front and switched with those in the front holes. Although entertaining, this approach wasn’t very successful. They were defeated by Farmhouse.

In what is an almost tradition for Tug Day, it started to rain in time for the final rounds. Despite the weather, the competition continued.

The sisters of Phi Mu defeated Sigma Kappa sorority for third place. For the men, Alpha Gamma Rho fraternity emerged victorious after defeating Farmhouse. Kappa Delta was the overall champion for sororities and the sisters of Alpha Delta Pi came in second.

Nashville senior and Kappa Delta sorority sister Katie Depriest has been a part of the Tug team for the past three years. Depriest compared each pull to a battle.

“I honestly just fight like a solider when I’m on the rope,” Depriest said.

Kappa Delta’s victory made it the 11th consecutive year the sorority has won Tug. Despite its history, Depriest said the team is never over-confident before a pull.

“Every team brings a new dynamic to the rope,” she said.

AGR was happy to regain the title of champion after falling in the second round last year. Cross Plains, Tenn., junior Michael Eidson has tugged for the past three years.

Eidson said the team was really disappointed with the outcome last year.

“We worked our butts off this year,” Eidson said. “It took a little while to get in the groove as a team, but after that I feel sorry for anybody against us.”