Take Back the Night returns to WKU 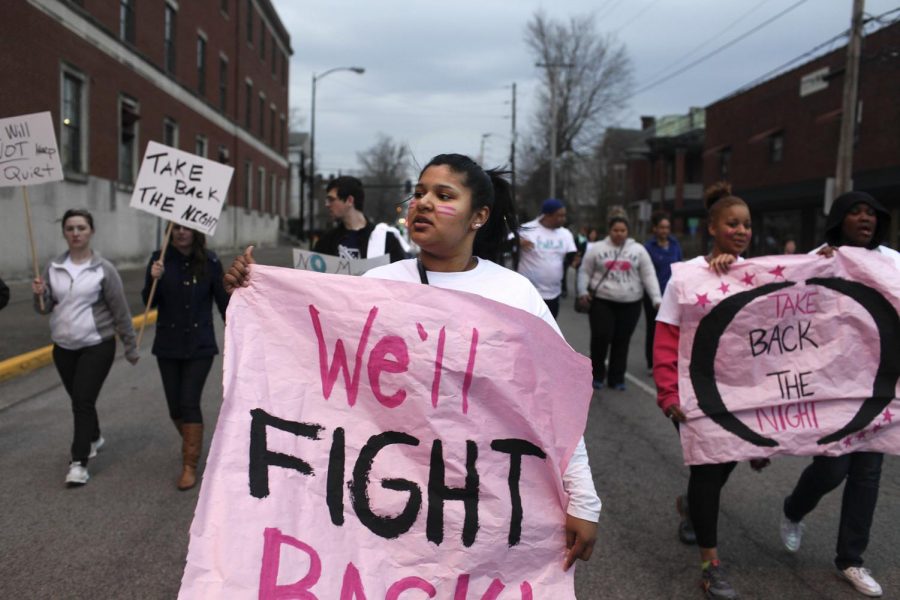 Freshman Lesha Sanchez marches with her friends from Gilbert Hall to downtown Bowling Green during Take Back the Night on Thursday. (Abbey Oldham/HERALD)

Live music, cheering and high spirits filled the parking lot of the Justice Center on Thursday night. A diverse group ranging from ages and genders gathered on the cold, rainy evening to show its support for the fight against violence.

The annual event, Take Back the Night, consists of a rally, march and vigil that serve as a protest of sorts for sexual assault. Due to weather, the vigil wasn’t held, but participants continued to march on.

Elizabeth Madariaga, Sexual Assault Services Coordinator at the Counseling & Testing Center, helped plan the event, which she said she hopes will increase awareness on what assault is and create a change.

“I hope that victims will feel supported enough to come forward easily because they aren’t blamed and re-victimized by society,” she said. “I hope that one day, we teach perpetrators to not offend instead of teaching victim survivors how to prevent assault.”

Madariaga has been at WKU for just over 10 years and has been in advocacy for years.

“This is a passionate area for me because the need is so strong to stand up against this,” she said. “When I started, I began working with Hope Harbor, so then it’s just been more and more about increasing the events we’ve put on.”

Madariaga said she works in collaboration with Hope Harbor as well as other community agencies and departments on campus to help to increase the awareness of sexual violence in our community.

She also said that people ages 16-24 are four times more likely to be assaulted than any other age group. She wants Bowling Green to realize this is a community issue.

“It’s not just a woman’s issue like most people think,” she said. “Just because we don’t talk about it doesn’t mean it doesn’t happen.

“We want people to learn of the services in our communities and for victim survivors to know they are supported and don’t have to be silenced,” Madariaga added.

Before the walk, there was a rally which consisted of live music and speakers. The live music and host of the event was Lauren Cunningham, community engagement coordinator at the ALIVE Center. She got the group excited and eager to begin by saying a few words.

“Tonight is a night about support and standing beside one another and saying we will take care of each other,” she said.

Melissa Whitley from Hope Harbor also spoke to the crowd. She became involved with this activism through radio and media as well as friends.

“We are here to show that there is strength in numbers,” Whitley said. “Tonight we are powerful.”

Whitley said it is important for college students especially to be aware of the risk of sexual assault.

“The highest rates are with college students,” she said. “But, they can play a role and get involved. They can do anything, even stopping it if they see it at a party.”

Trina McDonald, a public speaker who experienced sexual assault during her time in the Navy, also spoke to the crowd.

“I fight for legislation so that no other women have to go through what I did,” McDonald said. “We need to let people know this is happening and that we want it to stop.”

“My experiences did not define who I am. You create who you are,” she said.

Among the marchers was WKU alumna Jane Laves, who has been working for or participating in Take Back the Night for four years.

“Not enough people realize that one in three women are assaulted,” she said. “People need to be educated before they can take action.”