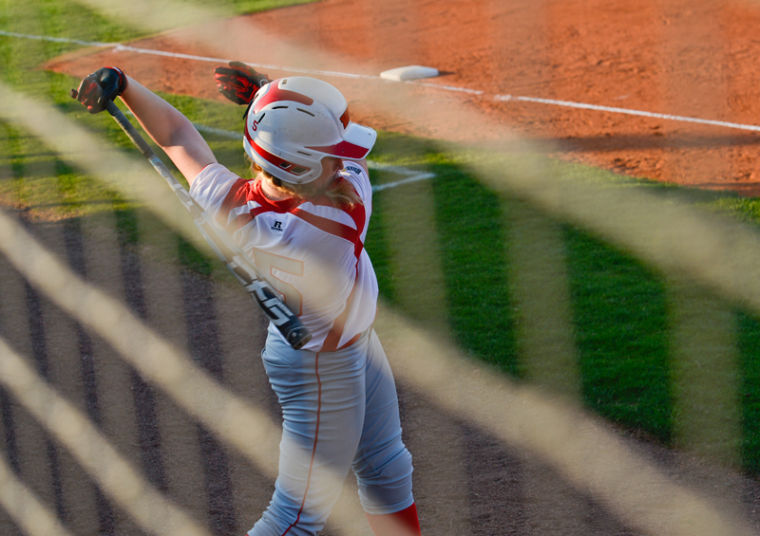 Junior infielder Amanda Thomas warms up in the on-deck circle during WKU's game against Samford. Thomas has recently set the WKU home run record with 32 home runs in three seasons.

The Lady Topper softball team picked up a home win Wednesday thanks to a great day at the plate from senior shortstop Amanda Thomas and a strong relief performance on the mound from senior pitcher Emily Rousseau.

Thomas was the key to the Lady Topper offense Wednesday. She drove in six runs on two hits, including a grand slam in the fourth inning.

Coach Amy Tudor said Thomas’ had a big day because she paid attention to the MTSU pitching staff.

“I thought Thomas saw the ball well and hit pitches that were over the plate,” Tudor said after the game. “A lot of balls went over the plate and we took advantage of the pitchers’ mistakes.”

Freshman pitcher Hannah Miniard started the day on the mound but was replaced by Rousseau in the top of the third inning after giving up three early runs.

Rousseau righted the ship, giving up just one run and three hits in five innings at pitcher.

“Hannah didn’t have her best day but Emily came in and picked her up, and I think that’s what a staff is for,” she said. “I think that those two have worked well together.”

Both teams started the day hot at the plate – the Lady Toppers led 5-3 after two innings. WKU would go on to score five more runs and hold MTSU to just one.

Thomas’ grand slam in the fourth inning put the game out of reach for the Lady Raiders. Thomas said she had been getting tips about the MTSU pitchers from junior outfielder Shawna Sadler, which gave her good insight on what to expect when she got to the plate.

“Whenever the bases were loaded I just tried to hit it as far as I could, and it ended up going over,” she said.

Thomas said while WKU and MTSU are not in the same conference this season, it feels good to pick up a win over the old rival in front of a home crowd.

“It’s always great to win over them, and even put them down six runs – that’s really good,” she said. “We came out a little slow the first innings, but we picked it back up and put them away. It was awesome.”

Wednesday marked the eighth win in a row for the Lady Toppers. That streak will be put to the test this weekend when Louisiana-Lafayette, one of three Sun Belt Conference teams still undefeated in league play, comes to town. WKU will open the weekend series Saturday at 1 p.m. against ULL.

Tudor said she hopes her team takes a winning attitude into the weekend from their recent hot streak.

“Winning’s contagious,” the coach said. “I think that when you’re used to winning, you expect to win, and we need to take that attitude into this weekend against the lovely Cajuns.”