In My Skin: Atheist students remain steadfast to beliefs in religious environment 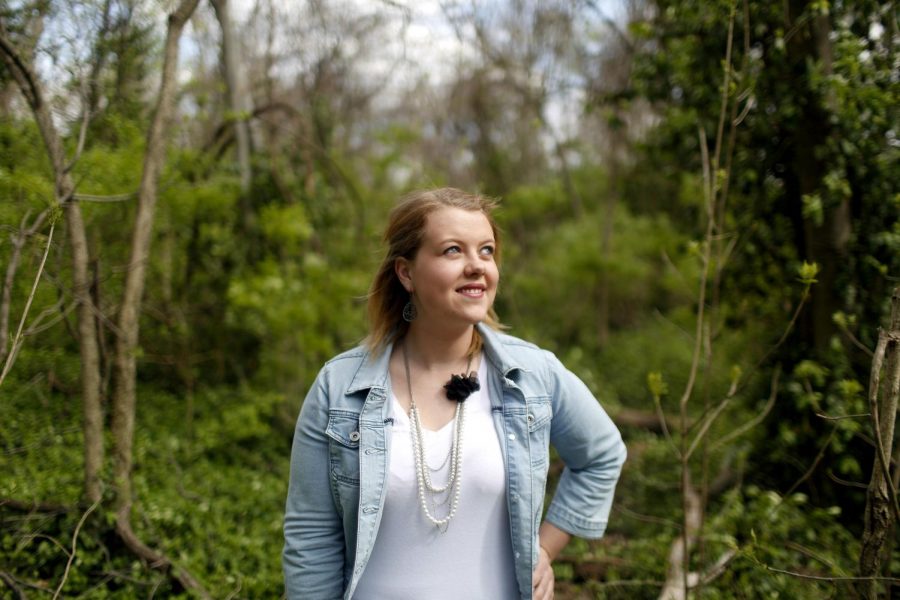 After years of enrollment in Catholic schools, Louisville freshman Stephanie Campbell decided not to affiliate with an organized religion and declared herself an atheist. (Adam Wolffbrandt/HERALD)

Stephanie Campbell wasn’t always an atheist. As a matter of fact, the freshman grew up in the Catholic Church and attended the Catholic all-girls Assumption High School in her hometown of Louisville.

She began to question her religious beliefs during her sophomore year of high school when she took theology classes.

“I just started thinking about what I thought myself versus what I’ve always been told and taken,” Campbell said.

All of her friends in high school were Catholic, but they were very accepting of her beliefs. That said, she feels more hesitant to being open about being an atheist at WKU than she ever did in high school.

“Western is way more religious than Catholic schools ever were for me, or the general population,” Campbell said.

While it was easier to tell her friends that she was an atheist, Campbell said it was much more difficult to tell her parents. Campbell attributed having the courage to talk to her parents about being an atheist to her high school guidance counselor.

Though she still attends some services with her parents, their awareness of her disbelief causes it to still remain awkward between them.

Hartford senior Amanda Mitchell went through a much different journey. Mitchell said her family spent some time in church while she was growing up. Around the age of 10, Mitchell decided she didn’t want to go to church anymore

“I told them, church makes me uncomfortable, I don’t want to go anymore and they said, ‘Okay we’ll let you make up your own mind about religion,’ and this is where I am,” Mitchell said.

In the past, Mitchell has identified as more agnostic but now leans more towards atheism.

Eric Bain-Selbo is the head of the Philosophy and Religion Department and describes atheism as someone who believes there is no god.

“When you look at the word, ‘a’ is the negation and ‘thei’ is the god,” Bain-Selbo said.

An individual who identifies as agnostic acknowledges there isn’t the evidence to support either atheism or religion, Bain-Selbo said.

Mitchell said one of the reasons she rejected Christianity was because she disagrees with some of the fundamental principles of the Bible.

“I think I rejected it most when people told me that my homosexual friends, who were better people than I, were going to go to hell,” Mitchell said. “Even if this God did exist, I would reject him if he was this kind of creature that would reject these people because of a certain thing.”

Religion can be a comfort for some people, Mitchell said.

“I look for comfort in other ways. I take comfort in science, honestly,” Mitchell said.

William Simpson, a recent graduate student who worked with Bain-Selbo, published a thesis on the “deconversion process” and the psychological effects it has on an individual.

Bain-Selbo said the thesis determined there is a sense of loss when an individual becomes atheist or agnostic after having been religious.

“In a sense this person who deconverts loses god, this being that was always with them,” Bain-Selbo said.

After this time of loss, there is a mourning period.

Mitchell said some of her Christian friends have asked her if she feels alone without a god, but she replied that she doesn’t.

Some say college is a common time in life when students question their religion among other things. In the midst of the learning and questioning environment of college lies debate.

Campbell said her experience with individual people at WKU has been much different than in high school. Whether that means students identifying as a Christian in their Twitter bio or posting Bible verses on social media, Campbell said people didn’t discuss religion much outside of school throughout high school.

Although Campbell may not agree with their beliefs, she said it doesn’t matter to her what others believe as long as they aren’t pushing their beliefs on others.

“When people are on campus preaching about hell fire and sin, I get so mad,” Campbell said. “I can’t talk to people about it because a lot people don’t necessarily agree with their methods but most people somewhat agree with their beliefs.”

While she disagrees with them, she isn’t one to argue. Campbell attributes the outwardly Christian environment to WKU’s geographic proximity to the Bible Belt rather than the school itself.

“In my philosophy class this morning I was talking about atheism and you can feel their eyebrows go up,” Campbell said. “Most people won’t really say anything to you, you just kind of know what they’re thinking.”

Mitchell said she tries to avoid confrontation when meeting someone with different beliefs. She is open to having a “peaceful debate” about their differing views but she said this oftentimes isn’t the case.

“Whenever I attempt to debate this, it comes down to neither of us can prove that the other is wrong,” Mitchell said.

With that lack of evidence, Mitchell acknowledges the unknown.

“When I die, physically my body will decompose,” Mitchell said. “I don’t know what happens with the soul, if there is such a thing. I’m okay with that.”

“For me, since I don’t know what later is, I want to be able to be well and be happy and be loving in this moment,” Mitchell said.

While Campbell isn’t one to routinely debate Christianity and atheism, she believes there is a major disconnect between the religious and non religious.

Campbell wants to help bridge this gap by helping to educate each side about their assumptions.

“From a good person coming from a religious background but not being religious I want to help connect that,” Campbell said.

The worst thing someone can have is a closed mind, Campbell said.

“I recognize that maybe later in life if something happens or I find some other reasoning or someone tells me something that changes the way I think I could be religious again,” Campbell said.

Mitchell acknowledged that some people need religion to get through their day-to-day life. Although she can appreciate that, she turns to science.

“I think that’s what so fascinating about human beings is that we are so passionate even when we are attempting to find out how the universe works,” Mitchell said.