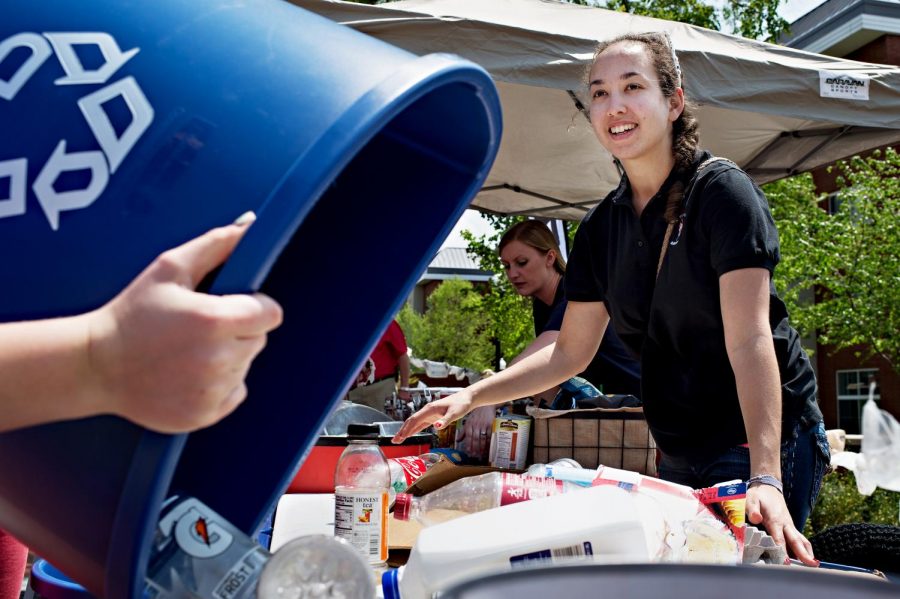 Sophie Sterlin, a senior from Haiti explains a game where participants have to sort through a pile and decide what items are recyclable and which are not during the Earth Day festival at WKU on Tuesday, April 22, 2014. (Brian Powers/HERALD)

What could plastic bottles, kale, birdhouses and bike trails possibly have in common?

They all made an appearance at Tuesday’s Earth Day Festival. The celebration included education and took over Centennial Mall, bringing together vendors from around Bowling Green and WKU.

Bowling Green Municipal Utilities (BGMU), WKU’s Horticulture Club and Ecology Club, WKU’s Restaurant Group, the Community Farmers Market and TopCrops were just a few of the booths that filled the mall. Several sold homegrown fruits and vegetables, emphasizing sustainability, while others focused on recycling and reducing waste, decreasing negative effects on the planet.

Jamie Miller represented the WKU Restaurant Group, offering a plethora of snacks and products that can be purchased in the Pit Stop by Pearce-Ford Tower or Pod in Bates Hall.

“We’re just trying to make people aware of the products we have that they can get here on campus without having to leave campus to get sustainable food items.”

The Restaurant Group doesn’t just focus on what it offers students. It also composts, significantly reducing the amount of trash thrown away.

“So far with the new compost system for Fresh Food Company they’ve already composted 5.5 tons,” she said. “When we made our poster it was 4.4 tons which is one and a half elephants.”

“Fresh Food Company has nothing that isn’t recyclable,” Lipareli said. “And Starbucks. Even the straws go down into the pulper which created the 4.4 tons. It’s actually a pretty cool thing.”

BGMU’s Doug Kimbler focused on reducing use in the first place, before recycling was necessary.

Kimbler also encouraged people to properly dispose grease and baby wipes. Putting either of the two down the drain or toilet can cause massive plumbing problems which often require professional help fixing.

The Ecology Club painted birdhouses to hang around campus, which would increase bird diversity.

One of the major projects the Ecology Club is currently working on is building a garden shed out of recycled pallets, said Adam Edge, a senior from Shepherdsville. The shed will include the first green roof on campus.

He said the shed would be completely sustainable and include a wall of vegetables.

Laramie Stone, a senior from Bowling Green, represented the Horticulture Club as she rolled newspaper into cups to place small plants in.

“We are selling houseplants that we’ve been growing in our greenhouse the past few months and they are like adapted well for dorm and apartment life, they’re really tough, hard to kill, low maintenance plants,” she said.

As someone who appreciates being green, Stone said it’s really neat to have a hand in growing something from a seed and watching it become a flowering plant or actual vegetable.

It’s a real sense of accomplishment when your little seed babies grow up and produce what you want them to,” she said.

One way to reduce unnecessary use is to leave the car keys at home and walk to the park, school or grocery store.

With 20 miles of existing trails that connect schools, parks and neighborhoods, Green Ways offers a safe way to travel without hopping in the car.

Currently, Green Ways is looking to update their original Master Plan, written in 1999. It’s turning to the public for feedback.

The focus now is on linking neighborhoods to schools and places so that if people wanted to ride their bike to the grocery store they’ll be safe doing so.

Clements said the survey can be found at www.warrenpc.org/greenways.

While the Earth Day Festival attracted and educated students and people from the community, each vendor realized the necessity for action the other 364 days of the year.

“We’re out there looking out for ya,” Kimbler said.