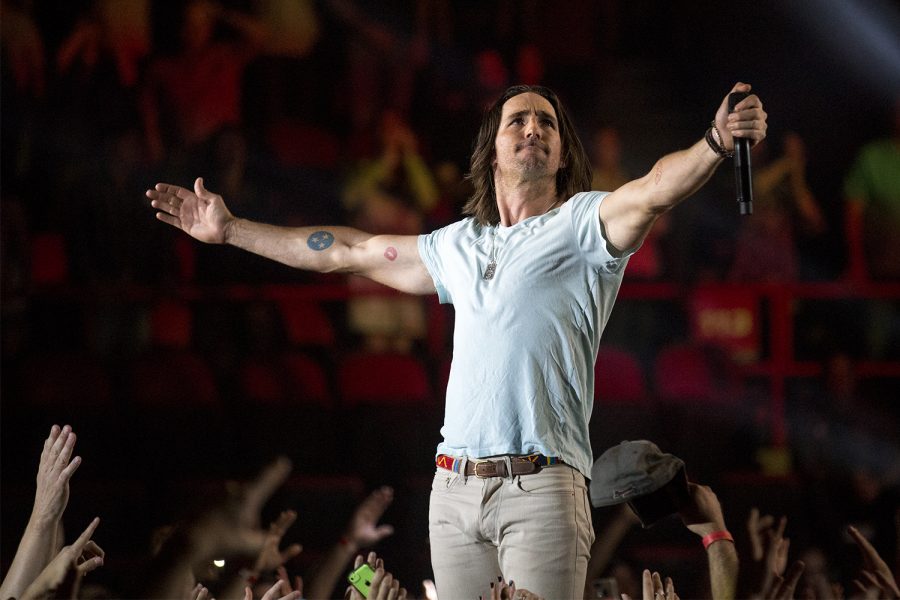 Hawaiian shirts and hula skirts danced to the sound of country music Thursday night at a party that took place not on the beach, but in Bowling Green, Ky.

Country singer Jake Owen brought everything but the ocean to Diddle Arena Thursday night for his beach themed “Days of Gold” tour with bands The Cadillac Three and Parmalee.

The Campus Activities Board hosted the event. CAB Public Relations Assistant Caitlin Newman said the organization sold over 4,000 tickets for the show.

The morning of the concert, students at the Preston Center spotted Owen on the elliptical.

“I was passing Preston and saw on Twitter that he was there, so I went in and got a picture,” Hopkinsville junior Natalie Majors said.

Fans decorated signs and dressed in their best beach attire in hopes of winning a chance to meet Owen or dance on stage during the concert.

Nashville band The Cadillac Three opened the show. The group is made up of Jaren Johnston, Kelby Ray and Neil Mason. They performed their hit song “The South.”

Parmalee, a band made up of brothers Matt and Scott Thomas, their cousin Barry Knox and their childhood best friend Josh McSwain, followed The Cadillac Three. They sang songs from their latest album “Feels Like Carolina,” including “Musta Had a Good Time” and “Close Your Eyes.”

The crowd went crazy as the band ended its portion of the show with its song currently on the radio, “Carolina.”

The audience waited in suspense after Parmalee finished, and a huge sheet dropped down over the stage that said, “Jake Owen: Days of Gold Tour.”

Fans screamed as the sheet fell, lights flashed and techno music played, but Owen was nowhere to be seen. Instead of beginning his performance on stage, the spotlight shined down on the bleachers where Owen was singing among his fans.

In the beginning of the concert, he played one of his newest songs, “Beachin’”, to go along with the overall theme of the concert. The stage was filled with palm trees, tiki bars and hanging lights.

During the show, Owen grabbed fans cell phones and took pictures of himself while he was performing.

Owen said he was not planning to perform his song “Heaven,” but made a special exception for two of his fans who got to slow dance on stage while he sang the song and the crowd waved their lighters.

Owen ended his concert showing a video of places in Bowling Green such as the Corvette museum and places throughout WKU’s campus.

The beach themed country concert got WKU students and the public in the mood for warm weather and summertime. “It was one of the best nights of my life because of Jake Owen’s beautiful hair,” Louisville sophomore Vince Lewis said.