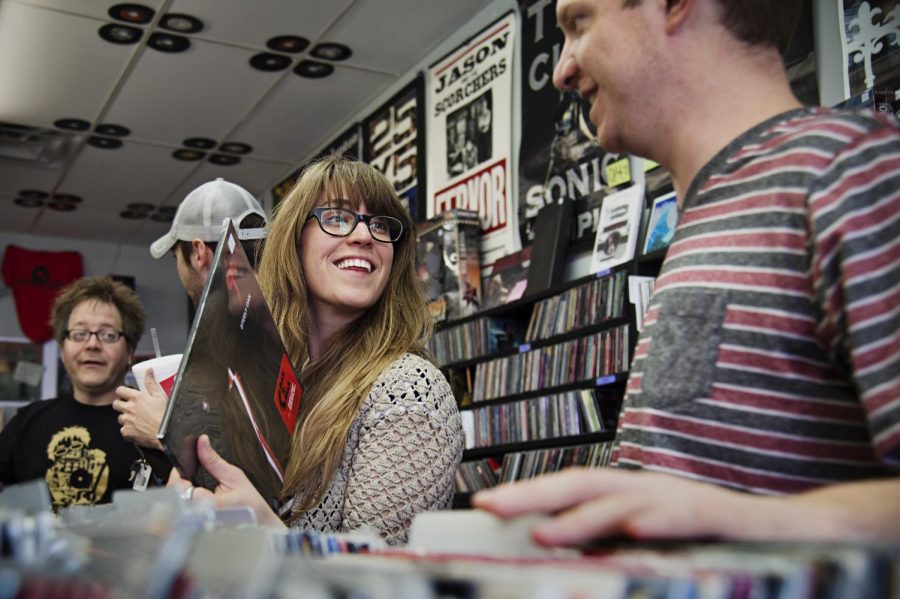 Many may think enjoying vinyl records is a relic of the past, but the 50-plus people who gathered at the door of Mellow Matt’s Music and More at 7 a.m. Saturday begged to differ.

Saturday marked the seventh annual National Record Store Day, the equivalent of Black Friday for vinyl aficionados. The day is aimed at celebrating independent record stores, with over 1,000 retailers participating nationwide in 2014. A local store, Mellow Matt’s Music and More, commemorated the holiday with live music from nine local bands and a wide range of releases, reissues and Record Store Day exclusives.

Matt Pfefferkorn, owner of Mellow Matt’s Music and More, said he was pleased with how  “the first full-fledged record store day in Bowling Green” went.

“We had a great turnout,” Pfefferkorn said,  “It was cool to see all that support out there. We went out all out with getting the releases and having local bands play in the parking lot.”

Pfefferkorn said there has been a strong resurgence of interest in buying vinyl, especially in the last three years. According to music tracking service Nielsen Soundscan, vinyl record sales rose 32 percent in 2013.

Pferrerkorn said he has noticed a huge spike in interest with vinyl in the teenage demographic.

“Since everything is so readily available in an instant because of things like Spotify and YouTube, the novelty of buying and sharing music tends to sort of wear off,” she said. “But, if you take the effort to purchase a vinyl and listen to an album in its entirety, not only are you supporting the bands by actually buying their music, but music nerds like me can sort of collect music in a physical way.”

Reynolds said, as an artist, it is crucial to support the culture and community of independent record stores.

“Mellow Matt’s is the only local, independent record store in Bowling Green and it Supporting local businesses and local music is really important to me and the rest of the guys in Buffalo Rodeo, so the fact we go to do both is a win-win for us.”

Pfefferkorn said bringing together local businesses and establishing a sense of community was one his biggest goals when he decided to open his record store.

“That’s exactly what I what I wanted to accomplish, be community-minded and have a true local independent store where we can do events like record store day, and there’s no reason we can’t pull in other local businesses and just make it more of a festival-type atmosphere,” he said. “Buying local does actually support the community and helps the community grow.”