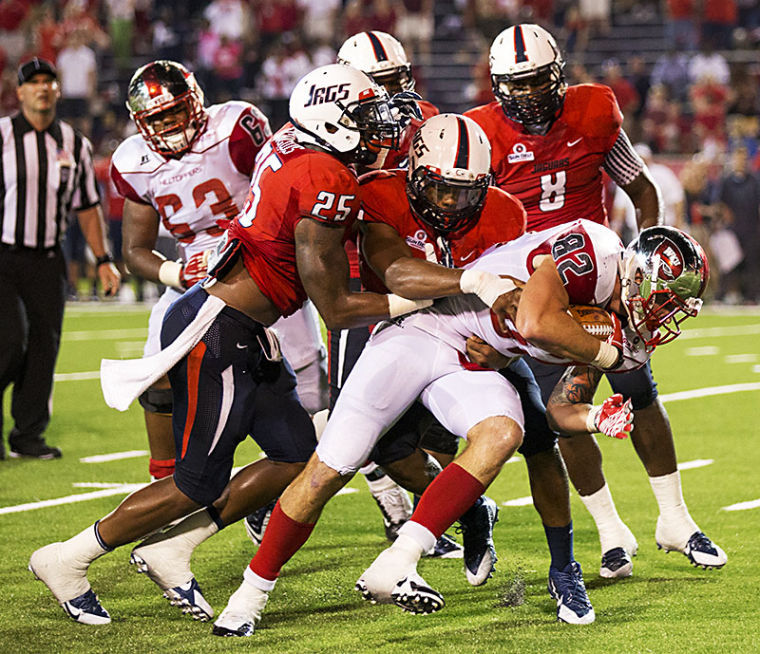 Tightend Tyler Higbee (82) is tackled by offensive lineback Clifton Crews (25) and offensive lineback Maleki Harris (6) during the second half of WKU’s game against Southern Alabama Sept. 14, 2013 at Ladd - Pebbles Stadium in Mobile Ala.

Ryan Wallace says his father always told him to ‘prove to be reliable’, and the son is inheriting a group of tight ends that have proven to be just that.

Wallace enters spring practice as the new tight ends coach for the WKU football team as a graduate assistant with the program. Wallace, a former tight end for the Toppers, played in all 13 games for WKU in 2012, meaning he’s coaching players he once shared the sidelines with except now he wears a hat instead of a helmet.

“He kind of relates to us,” redshirt junior tight end Tyler Higbee said. “He kind of knows our strengths and our weaknesses and what we need to work on, and he’s also a student of the game. He can teach us and he’s learning as well as we are. He’s helping us out.”

Higbee, along with senior Mitchell Henry and redshirt junior Tim Gorski accounted for a combined 646 yards receiving for the tight end group last season. That number decreased from 776 yards in 2012 due to the transition from former coach Willie Taggart’s pro-style offense into the spread offense introduced by former coach Bobby Petrino.

With the change in the system, so changes their role. Henry said with a year under their belts, it makes practicing the offense much simpler.

“Last year when coach Petrino got here in the spring it was kind of just real out there,” Henry said. “You didn’t know what you were doing a lot of plays, just thinking every time you ran a play. Now it’s like you can just go out there and play full speed and you know what you’re doing the whole time. You can see that with our offense. It’s really clicking.”

Henry is a tight end who Wallace says has come a long way in the area of run blocking. The tight ends will have the chore of blocking for Leon Allen after the loss of All-American Antonio Andrews.

Being more physical and making improvements in run blocking is the biggest key Wallace is looking for out of his tight ends this spring.

“They’ve done a good job grasping it,” Wallace said. “When I first moved in they were very open to coming up to me if they had a little question about technique.

“I think we need to be physical at the point of attack, that’s one thing, and make plays when we’re called upon. There’s easy plays you have to make and be able to be trusted, be accountable, be reliable.”