Toppers bounce back with 5-2 win over Austin Peay 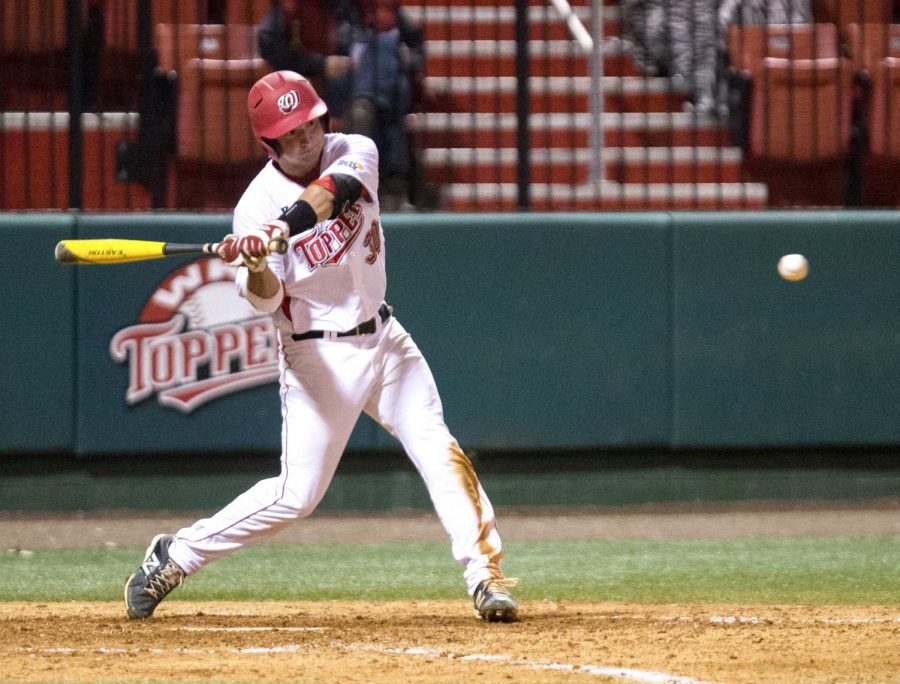 After a tough month of March for the WKU baseball team, the Toppers were able to secure their first win in April against Austin Peay 5-2.

The game, dominated by the pitching staff, was the first of five games being play at Nick Denes Field this week.

A record crowd of 605 this season was on attendance to see the Topers 15th win of the season.

“I told our guys before the game if you play with the same intensity and confidence you did going into Lafayette, you’re going to be in good shape all year long. And we got the mid-week win.” Myers said.

Freshman Sam Higgs recorded the win on his second start of the season.

Unlike his first start against Georgia, Higgs lasted more than one inning as he went five inning allowing four hits and one run. The Henderson native had a rough start, giving up one of the two runs in the game after a single and a walk. He settled down after his shaky start, recording 10 straight outs in the next three innings.

“We haven’t been real sharp on the mound, but I thought Sam Higgs did a great job showing some composer,” coach Matt Myers said. “I thought that was the best Tate Glasscock has been, we’ve been working hard the past week and it was huge for him.”

Higgs was relieved in the sixth inning by junior Tate Glasscock. Glasscock, in one of his best performances, recorded a season-high three strikeouts in two innings.

Junior closer Ian Tompkins followed Glasscock and gave up his second earned run of the season in the eighth inning trying to protect a four run lead. Tompkins struck out the side in the eighth, but struggled in the ninth.

It took until the third inning for the Toppers to get on the board as a two-out RBI double by junior Ryan Messex scored junior Ryan Church to tie the game at one run each. A single to right field by sophomore Anderson Miller scored Messex and allowed the Toppers to take their first lead of the game.

Messex struck again in the sixth inning with a sacrifice fly to make the lead 3-1. Messex was responsible for three of the five Toppers runs, driving in two and scoring another.

It was his 25th multi-hit game of his career as he leads the team in batting average with .377.

He also served as catcher in place of Ty Downing, who suffered a minor hand injury at Louisiana-Lafayette, and caught one running stealing and picked off another.

Wilcox joined the fun the next inning giving WKU some insurance runs in the seventh as a two out double down the first base line scored two runs to extend the lead 5-1, making it his 17th multi-RBI game of his career.

In the eighth inning Messex hit a double down the third base line which was called fair. The coach for the Governors argued with the umpire and was then ejected from the game.

Tompkins began the 9th inning in wild fashion. The Governors managed to get runners on first and second. A ball down the first base line was called fair that advanced runners to second and third but the batter and second runner both stood on second base. Wilcox tagged one of them but the play was then called a foul ball.

After everyone settled down from the wild play, Tompkins struck out the next batter to make it two outs. A walk loaded the bases and junior Brennan Pearson came in to strikeout the last batter to give WKU the victory.

“After a tough weekend we had to come out and get a win here.” Messex said “Not everybody had their best stuff but we have guys in the bullpen like Pearson that can throw strikes.”

WKU’s next game is Wednesday against Lipscomb. It will be the second of five games played at Nick Denes Field this week, the game starting at 4 p.m.

WKU and Lipscomb met in Nashville Mar. 5 where the Bison ran away with a 10-2 win.