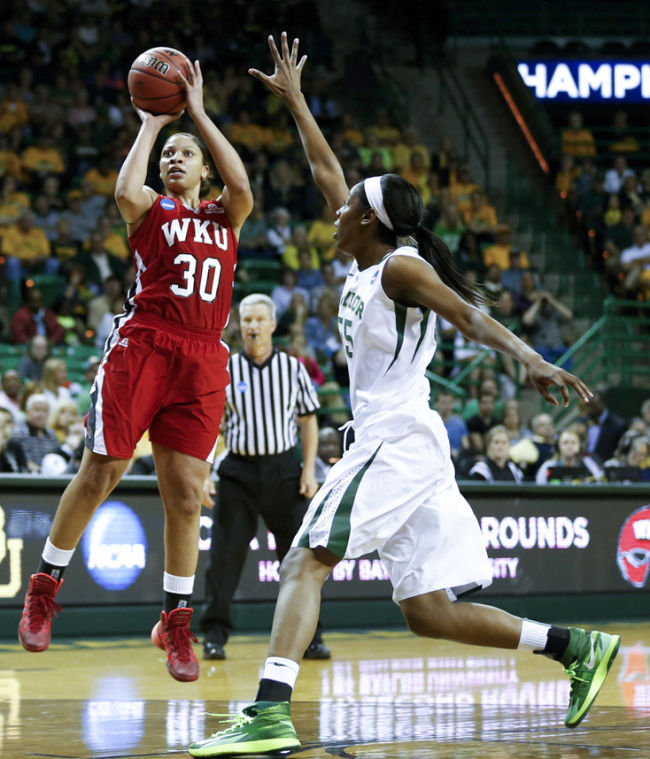 WACO, Texas – Never before has a 15-seed team advanced past the second round of the Women’s NCAA Tournament.

If any team came close to breaking that record, there were many watching on national television Saturday night who thought Western Kentucky would be that team.

Instead, that record will hold true for another year after 15-seed WKU couldn’t pull the upset over 2-seed Baylor in a 87-74 loss to the Lady Bears in the first round of the NCAA Tournament.

The Lady Bears’ 87 points were the most points allowed by WKU all season.

Baylor’s largest lead came in the final minute by the same margin as the final score, but WKU kept the difference between five or 10 points.

Going into what was more like a home game with 6,207 in attendance, the Lady Toppers’ never let the moment get the best of them.

“We weren’t intimidated by them at all,” redshirt freshman guard Kendall Noble said. “We knew they could play and they were a good team, but we were prepared for everything they threw at us, but we just fell a little short.”

The loss ended a 10 game winning streak for WKU, which has now lost its last four NCAA tournament games, and played in its first since 2008.

“We talked to them about this is what women’s basketball is all about,” coach Michelle Clark-Heard said. “Preseason, in the summer, this is what you work for, to have the opportunity to play in the NCAA and on national TV and I give those kids a ton of credit because that’s what we’ve done the last 10 games.

Noble’s back-to-back 3-pointers early brought the Lady Toppers back within one to 11-10 at the 16:49 mark of the first half.

Noble’s early triple was only one of many runs that WKU would before Baylor bounced back.

“Western Kentucky made several runs at us,” assistant coach Bill Brock said after the game, who was serving as interim coach for the game due to Kim Mulkey serving a one game suspension. “You bend, but you never break. They would keep pushing us and attacking us but we never did break and we always had an answer.”

Down 27-25 at the 7:15 mark, Noble stole the ball and quickly threw it to a wide open Bianca McGee who buried the triple to put WKU in the lead.

But that lead was short lived – only 16 seconds before freshman Nina Davis took the lead back with a layup.

Davis finished the game with a career-high 32 points and 10 rebounds while senior Odyssey Sims had 31 points, shooting 4-of-8 from 3-point range.

“Davis is one of the best freshmen we’ve played against,” senior guard Bianca McGee said, who scored 18 points for the Lady Toppers. “Very athletic, good around the basket. She rebounded very well and got some second chance baskets.

“Odyssey Sims, of course, she’s averaging 30 points per game, so we knew she was going to be ready to play. I take my hat off to them. They’re two great players.”

Brock credited his team’s ability to pull away late in the game by how they guarded Gooch, who had nine points in the second half.

“I think the thing that kept giving us trouble in the first half was guarding Gooch,” Brock said. “She’s an outstanding post player. She has that body style that is hard to match up with. She can take you inside and outside. She was getting body on body with Nina (Davis) and she was burying her two deep. We weren’t doing enough work on defense and getting around her and in front of her.”

WKU’s season ends at 24-9, and an NCAA Tournament appearance that caught the attention and gained the respect of many watching, including Brock.

“I think Western Kentucky played outstanding,” Brock said. “I think Michelle does a great job there and that program has really done well in the last two years under her tutelage.

“They were not seeded high enough in this tournament. I think they could have been seeded a little higher.”

“We did it for each other and the program,” Bianca McGee said. “Western Kentucky has a great history, and it’s great to have them back in the NCAA tournament. Just be ready, because they’re not going anywhere.”