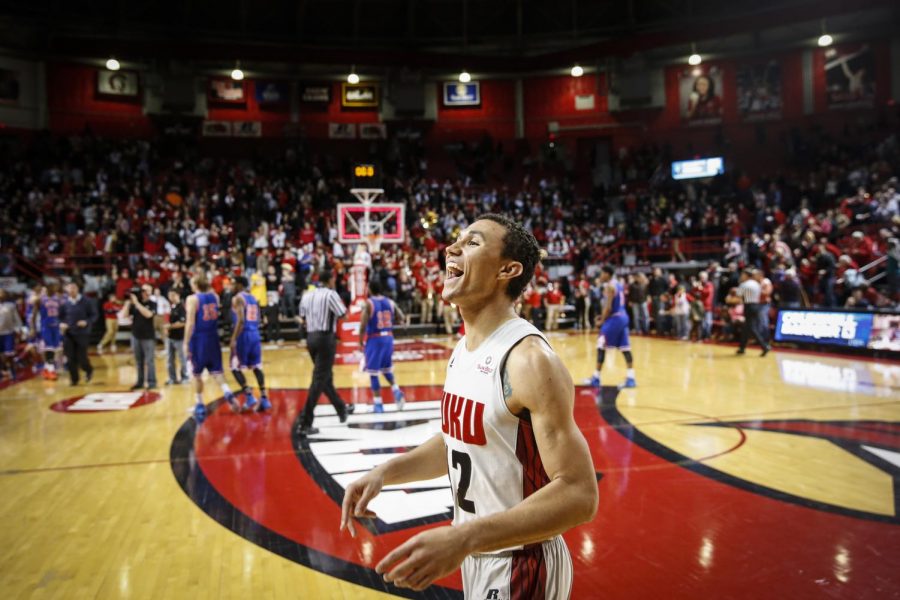 WKU senior guard Brandon Harris (12) shouts to his teammates in celebration after a basketball game between the WKU and UT Arlington at E.A. Diddle Arena on Thursday, Jan. 30, 2014. WKU won 77-72. (Jabin Botsford/Herald)

Three hours before his first ever college basketball game, Brandon Harris was called into the coach’s office at Northwestern Oklahoma State University to be told he had been redshirted.

Before that confrontation, Harris was planning to make the most out of an NAIA program that gave him what he called the only opportunity to play college basketball.

A year passed and basketball wasn’t working out for Harris.

“I was scared,” Harris said. “I hadn’t talked to any other schools at all and I wasn’t happy. I prayed about it because I said it wasn’t for me. I said I was done with basketball and I told my mom I was going to find a job and find a way.”

Harris came back and instead took a leap of faith and transferred to Otero Junior College in Colorado before receiving an offer to play at WKU.

If you had asked him four years ago after quitting on an NAIA team if he would one day play a vital role in WKU’s second straight Sun Belt Conference Tournament role, he probably would have used an expletive to direct your ideas elsewhere like he did with Bradley Franz.

Franz, who at the time was the vice president of student affairs at NOSU while doing side work as a junior college scout, saw the potential in Harris even when he didn’t see it in himself.

Franz was sold on Brandon’s character that echoed the embodiment of success.

“Brandon is the type of guy that I’d hire in 30 seconds as an employee,” Franz said. “He’s loyal, he’s very smart, he’s got tremendous work ethic and he’s got great character. In all that, I never said anything about him being a great basketball player.

“All the things I said embody whether a person is going to be successful or not. I figured if he went out and played like I thought he could play, instead of quitting and hanging it up, then he’d probably go to a D-I school.”

Quitting isn’t in the routine vocabulary of Harris; his character doesn’t allow it.

Through obstacles of homelessness as a child, not making the middle school basketball team, and bouncing around from school to school, quitting has never been an option for him.

His character tells him that staying the course will make things better in the end.

“My mom told me you have to think about life like sand paper,” Harris said. “When it runs on you it hurts you the wrong way, but eventually you’re going to come out smooth and polished. That’s how I look at the obstacles in my life and say to myself, ‘you’re going to be better because of this’.”

His time at WKU hasn’t been a bed of roses on a stat sheet in his final year, but that’s not important to Harris.

Entering the season as the starting point guard, he’s only averaged 18.4 minutes per game, down significantly from his 29.6 minute clip last season.

His points per game average is down to 5.7 from 8.2 last season.

“Whatever coach asks me to do, that’s the kind of person that I’ve been,” Harris said. “He asks me to come off the bench, wring a towel, ring a bell, I’m going to do the best I can do, the best job I can do doing it.”

When Harris takes the floor in Diddle Arena Thursday night for the last time in his career he’ll be accompanied by the person who taught him everything about basketball since he was two years old; his mother, Tajuana Brown.

There is no other place she would want to be, she said, than right beside her son to celebrate how far he has come.

“My son is really doing some big things and it’s just by the grace of God that he’s able to do the things that he’s done,” she said. “I’m just happy and overjoyed. I’m ready to see what God is going to do next.”