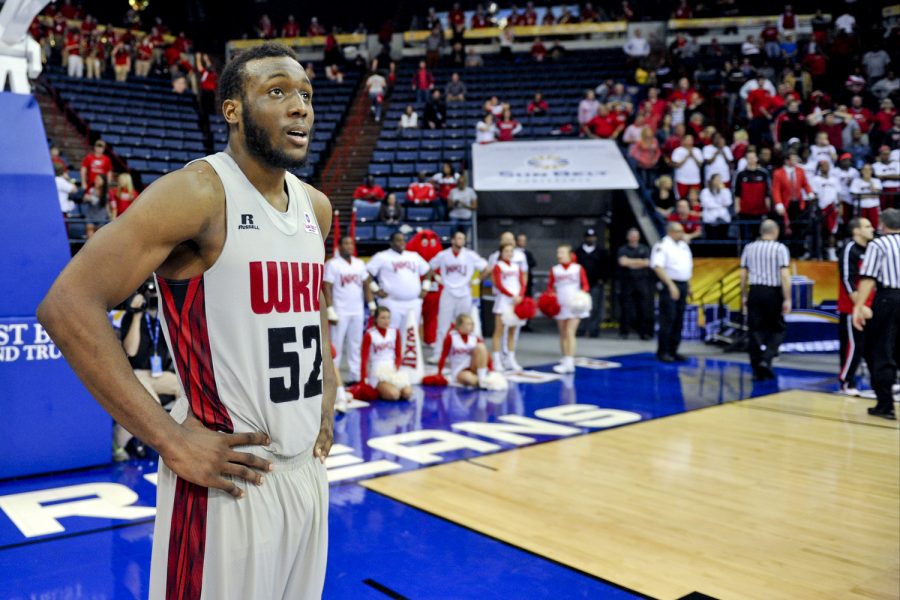 WKU junior guard T.J. Price looks on after a 73-72 loss against University of Louisiana Lafayette during the 2014 Men's Sun Belt Tournament semifinal round at Lakefront Arena in New Orleans, La. on Saturday Mar. 15, 2014. (Jeff Brown/HERALD)

NEW ORLEANS — Saturday’s semifinal contest against Louisiana-Lafayette felt like a game from last season’s miracle run through the Sun Belt Conference Tournament up until the final buzzer.

The Toppers battled back from big deficits in both halves. They had the ball in the waning seconds with a chance for a game-winning buzzer beater.

Last year — or two years ago — that last shot from T.J. Price would have rolled in. This time, though, the magic ran out. For the first time since the Ken McDonald era, the Toppers will be watching the first week of March Madness from Bowling Green instead of on the court.

This is the first time since his Warren Central High School days that junior forward George Fant won’t be taking part in the NCAA Tournament. After the game, he couldn’t hide his disappointment.

“I’m not really used to it,” he said. “It definitely does hurt, but I’m proud of my team, proud of my coaches, proud of the players. It just didn’t go right for us.”

It didn’t go right for the Toppers, but it almost did.

Price, who matched Fant for a team-leading 16 points, brought the ball up the court with less than 10 seconds to go and open court in front of him. ULL was able to get back down on defense and get in his way, but coach Ray Harper is convinced Price was just inches from pushing the Toppers to tomorrow’s Sun Belt title game against Georgia State.

“If he could’ve turned it about another half-step, he had probably a bucket,” the coach said.

Saturday’s loss was a tough one for Topper fans, especially the deep group that traveled across the south to New Orleans for the game.

It was even tougher for WKU’s three seniors, though. Guard Brandon Harris had one of his best games of the year with 11 points. Forward O’Karo Akamune pulled in eight rebounds. And fifth-year senior guard Caden Dickerson, who started the game and finished with five points, was visibly upset on the court following the loss.

After coming within a few plays of topping No. 1 seed Kansas in the NCAA Tournament last year, those guys wanted one more shot at the Big Dance.

“They’re just class acts,” Harper said about his seniors afterward. “They’re great guys. They’ll be successful long after today, which is what I’m most proud of. They’re great kids, and they represent this basketball program and this university the right way.”

Next season will bring in a new look for the Toppers. Fant and Price, WKU’s two centerpiece players for the past two years, will be seniors. WKU will start Conference USA play with a batch of new recruits and new rivalries in a tougher league.

It’ll take a while for the Toppers to recover from Saturday’s loss. But it could also motivate WKU players to put in time on the practice court over the summer, to study game tape and improve on the defensive end. It might even encourage them to spend time at the stripe — WKU’s 15-of-27 (55.6 percent) night at the free throw line was definitely a factor in tonight’s loss.

The Toppers will have a long summer to get back at it and try to get back to NCAA Tournament shape. But tonight, it’ll be tough to think about next season.