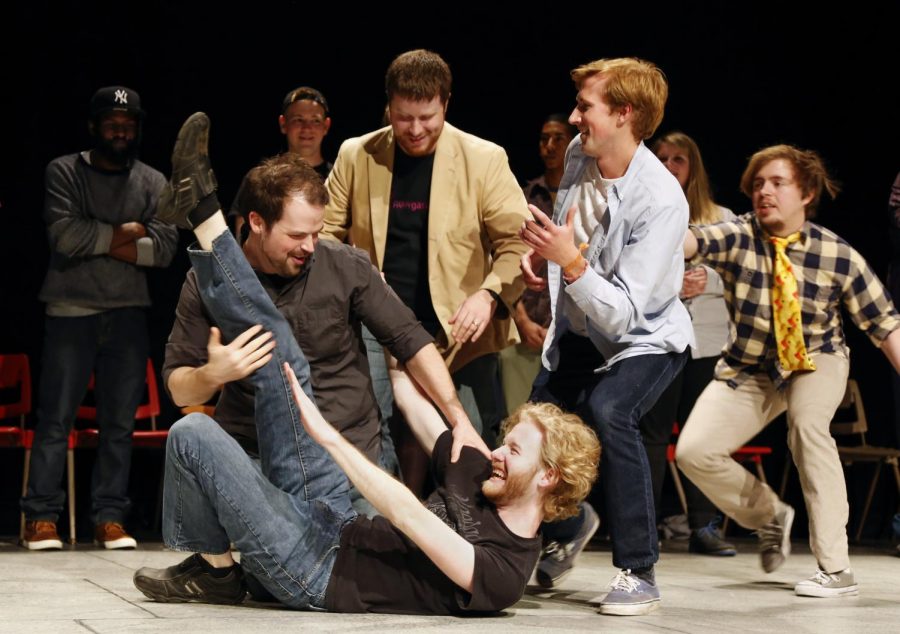 A host of Happy Gas alumni joined the improv troupe’s current generation in the Russell Miller Theatre on Saturday night in celebration of the group’s 15th anniversary.

As the crowd gathered in the theatre, the sound system played a selection of hit songs from 1999, the year of Happy Gas’ inception.

Muhlenberg County senior and Happy Gas member Stephen Korfhage introduced Josh Chapman, one of Happy Gas’ founding members, before the show kicked off with a performance from Chapman and other Happy Gas alumni.

Colin Thornton, a founding member of Happy Gas, as well as the troupe’s first president, said the group has grown far larger since he left than he ever thought it would.

He said the inspiration for what would become Happy Gas came from acting games they would play in Professor David Young’s class. Young is now the head of the Department of Theatre & Dance.

“It was his first year teaching,” Thornton said. “And I thought, ‘What if we did these acting games in front of an audience?’”

He said he enlisted fellow student Josh Chapman because “Josh was the funniest guy around the theater department” and got a troupe together.

The group decided on the name Happy Gas, practiced for the rest of the Spring 1999 semester and put on a few shows toward the end of the school year.

Chapman said the group has built a legacy for itself. “I think people don’t want to let it fall apart,” he said.

“One of the amazing things is how this team has affected people’s lives,” Thornton said. “We’ve had people meet and get married, and we’ve had people go into careers in comedy.”

After an intermission, a number of current Happy Gas members took the stage before both troupes united for a final act.

Glasgow freshman and new Happy Gas member Matthew Zuccari said he thinks Saturday’s show was one of the best improv performances he’s been involved with.

Zuccari said he loves improv, although it is not without its difficulties.

“I guess a lot of the trouble comes with building chemistry, trying to understand your teammates,” he said. “Miscommunications can happen, but all in all, I think we’re doing pretty well.”

Korfhage, who is Happy Gas’ public relations officer, said he thinks the group’s independence is what has enabled it to last so long.

“We are not affiliated with WKU so we don’t get the sponsorship that some of the other extracurricular events on campus get,” he said. “But we also don’t have to live by their rules and we survive on our own.”

Korfhage said he believes the group has a bright future ahead of it.

“We have a phenomenal group of freshmen,” he said. “I am really excited for them in the future.”