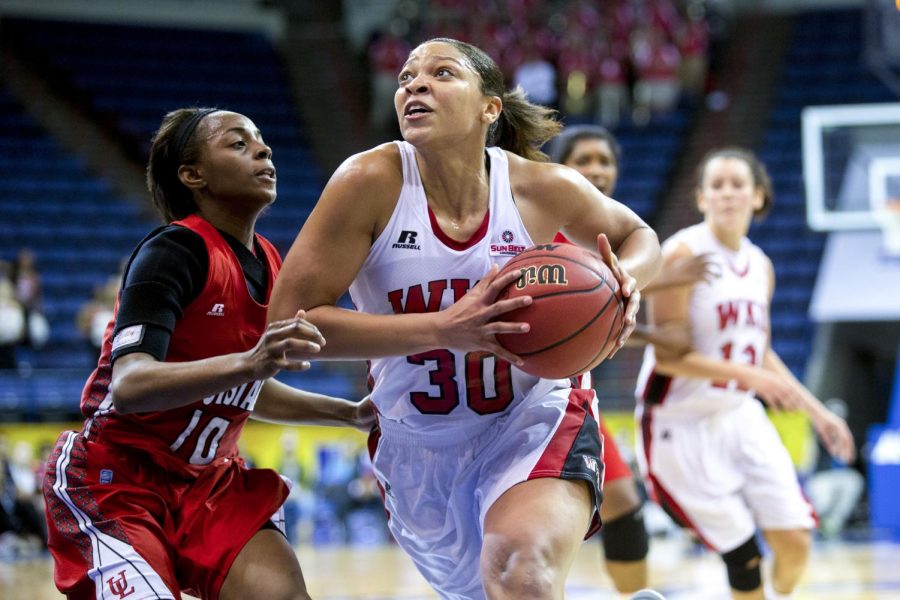 WKU's junior forward Chastity Gooch (30) drives around ULL's guard Kia Wilridge (10) making a basket and drawing a foul giving the Lady Toppers a 3-point lead with less than two minutes to play during WKU's 67-61 victory over the University of Louisiana Lafayette in the first round of the Sun Belt Tournament Wednesday, March 12, 2014, at Lakefront Arena in New Orleans, La. Gooch would lead the Lady Toppers with 21 points for the night. (Mike Clark/HERALD)

NEW ORLEANS — The No. 2-seed Lady Toppers will look to secure the program’s 17th NCAA Tournament berth against No. 1-seed Arkansas State in the Sun Belt Conference Tournament Championship game on Saturday at 8 p.m. in Lakefront Arena.

A win against the Red Wolves would also give WKU (23-8) its 10th Sun Belt Conference Tournament crown and its 10th straight victory dating back to the regular season.

WKU dropped both regular-season meetings against the Red Wolves by a combined six points.  Redshirt freshman guard Kendall Noble, who tallied 19 points in the semifinal victory over Arkansas-Little Rock, recorded 27 points and three steals in a losing effort against Arkansas State (22-10) on Feb. 5.

Arkansas State owned the league’s best record through the regular season, going 14-4 while the Lady Toppers were right behind the Red Wolves with a record of 13-5.

The game can be streamed live here: http://es.pn/SUNBELT-W-Champ