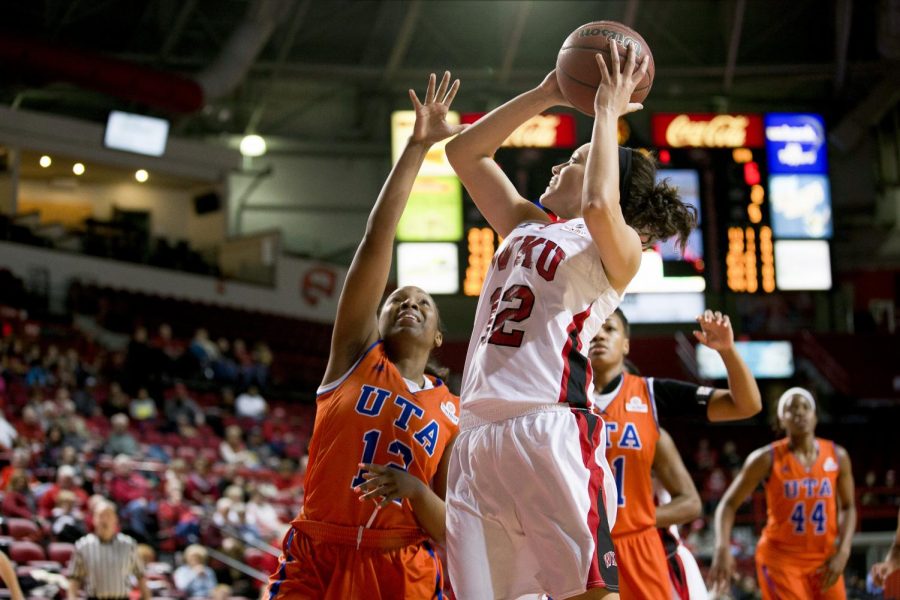 WKU's redshirt freshman guard Kendall Noble (12) shoots over UT Arlington guard Chauntandra Williams (12) during the first half of WKU's 59-46 victory over the University of Texas at Arlington Wednesday, Jan. 29, 2014 at Diddle Arena in Bowling Green, Ky.

WKU secured its fifth straight commanding victory on Saturday with a 94-70 win over UT-Arlington in Arlington, Texas.

The Lady Toppers have beaten each of their last five opponents by an average of 27.2 points per game.

WKU (19-8, 11-5 Sun Belt Conference) used balanced scoring to jump out to an early 9-0 lead and headed into halftime with a 52-27 advantage, marking the fifth straight game the Lady Toppers have lead by 20 or more points at the half.

UTA chiseled WKU’s lead to 20 to begin the second half, but the Lady Toppers ultimately ran away with a 94-70 victory.

WKU will host its final home game of the season on Wednesday against Louisiana-Lafayette at 7:00 p.m. CT. The Lady Toppers used a late run to seal to 68-63 victory over ULL in Lafayette, La. on Jan. 25.