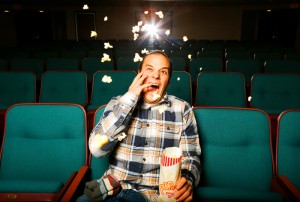 THE REEL with Ben Conniff

“Muppets Most Wanted” starts with a hilarious, self-referential song about how sequels are always inferior to their predecessors.

It’s a promising start, but the film inadvertently proceeds to prove that point for the next two hours.

Something about the 2011 “Muppets” film made it irresistible, and that “something” is missing this time around.

The creative team behind “The Muppets” effectively reintroduced the characters for a new generation of fans, while also reminding the old devotees why they fell in love with Kermit and the gang in the first place.

A lot of heart went into the first film. The love that director James Bobin and writers Jason Segel and Nicholas Stoller had for the characters was palpable in every frame.

That reverence is somewhat lost in “Most Wanted,” the first direct sequel in Muppet movie history.

After preventing a greedy oil tycoon from bulldozing their old theater, the Muppets team up with Dominic Badguy (Ricky Gervais) to take The Muppet Show on a world tour. Dominic has ulterior motives, however. He teams with Constantine – a Kermit doppelganger and also the world’s most dangerous frog – to steal the Crown Jewels of London with the Muppet tour as a guise.

If that wasn’t enough, Kermit is framed for Constantine’s crimes and spends the entire film trapped in a Russian gulag.

There’s almost too much going on, and if it all sounds a little contrived, it is. “The Great Muppet Caper” featured a somewhat similar scenario in which Kermit and Fozzie Bear pose as news reporters who track down the culprits of a London jewel heist.

The contrivances in “Most Wanted” are reconciled by the Muppets’ trademark self-referential humor, loads of surprising celebrity cameos, and endearing performances from two of the three human leads.

Gervais’s character isn’t conniving enough to be taken seriously as a villain, nor is he particularly silly or lighthearted enough to take Segel’s place as the Muppets’ closest human companion.

There’s also a late revelation about his criminal standing that you’ll probably see coming from a mile away. Suddenly, Constantine’s number 2 isn’t so clever after all.

The opposite is true for Ty Burrell and Tina Fey, who star as Interpol agent Jean Pierre Napoleon and gulag warden Nadya, respectively.

Burrell, of “Modern Family” fame, evokes side-splitting shades of the bumbling Inspector Jacques Clouseau as he and Sam the Eagle stay hot on the tail of Constantine, Badguy and the rest of the Muppets as they traverse Europe.

Burrell’s a better Clouseau in this unrelated Muppet film than Steve Martin was through two “Pink Panther” remakes.

As Nadya, Fey appears to run the happiest gulag in Soviet history. How could you not when your secret crush – a talking, green, felt frog – is held under your jurisdiction indefinitely?

For those inmates who misbehave, “The Wall” is a particularly hilarious form of punishment at Nadya’s disposal.

Despite some issues with over-plotting, “Muppets Most Wanted” is by no means a total misfire. The affectionate creative team is still here, but without Segel’s participation, the classic spirit of the characters isn’t as strong in this film as its predecessor.