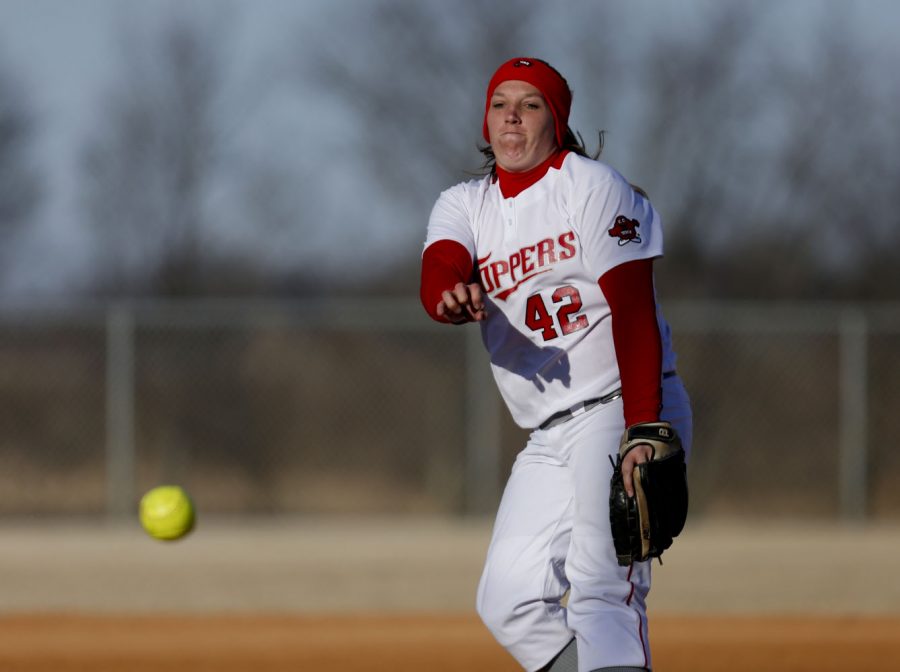 Senior pitcher Emily Rousseau (42) pitches the ball during the 1st inning at the women's softball game against the University of Northern Iowa on Friday, February 28 at Buchanon Park in Bowling Green, Ky. The tops lost 3-6. (Kreable Young/HERALD)

Senior pitcher Emily Rousseau has been named the Sun Belt Conference Pitcher of the Week Monday after her performance against Troy this weekend.

In two starts against the Trojans, Rousseau threw complete games including a her first career no-hitter in game three of the series Sunday.

Rousseau led WKU to two wins last week, allowing three runs on 15 hits while striking out 23 batters, including nine a piece in the two games against Troy this weekend. She now has 100 strikeouts of the season.

In her no-hitter, she took a perfect game into the seventh inning and was two outs away from perfection before walking the Trojan batter.

It was the first no-hitter for WKU since 2012 and the first in conference play since 2006. In the two games against Troy, she pitched two shutouts bringing her career total to 13.

Rousseau is currently in the midst of a 20.1 inning streak where she has not allowed a run. The streak is good enough for fourth on WKU’s all-time list, less than one inning away from the streak which ranks third.

She is currently 33rd in the nation in walks allowed per seven innings at 1.12 and is in the top 100 in the NCAA in strikeouts.

It is her first SBC honor of the year and fifth for her career after she won four last season.