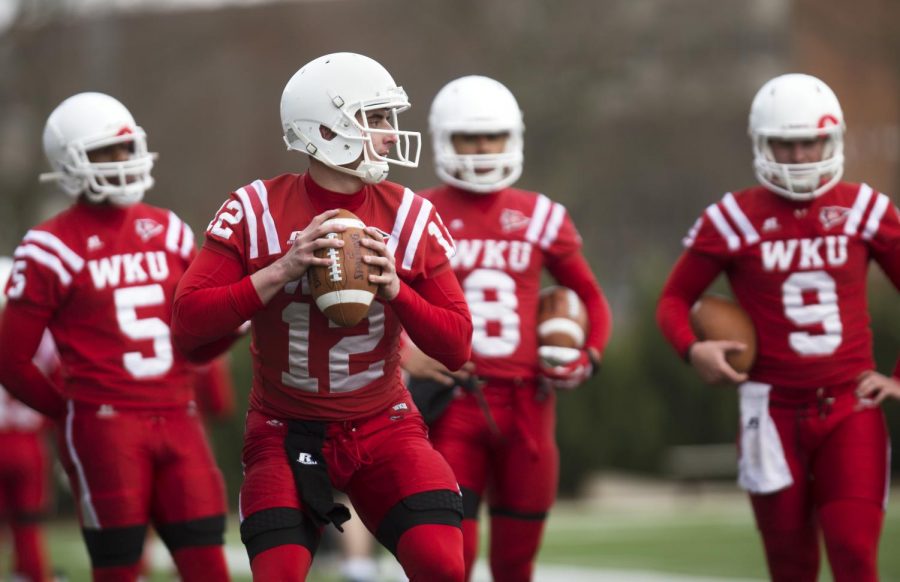 Finishing the regular season 8-4 without a bowl bid has left the WKU football team hungry to prove its worth. A new head coach and a fresh start in a new conference may be just what the doctor ordered.

With their inaugural season in the Conference USA looming, the Toppers began preparations for the 2014-15 season in their first spring practice on Tuesday at Smith Stadium.

The Toppers are coming off a third-place finish in their final year as a member of the Sun Belt Conference with a 5-3 record. WKU was snubbed from a bowl bid despite closing the season on a four-game win streak and beating Arkansas State 34-31 in the final game of the year. Despite losing to WKU, it was the Red Wolves who earned the conference’s second bowl bid into the GoDaddy.com Bowl.

Coach Jeff Brohm, who was promoted to head coach on Jan. 10 following the departure of Bobby Petrino to Louisville, said the Toppers were craving a chance to get back on the field.

“I thought the first day went well,” Brohm said. “I thought our guys had energy and they were eager to be out there. I think it’s important to be a hungry football team. I think our guys worked hard and put in a long day of work. There’s a lot of things to teach from, but I liked the first day.”

WKU will have some big shoes to fill this spring without All-American running back Antonio Andrews. The defending Sun Belt Conference Player of the Year led the nation in all-purpose yards for back-to-back seasons and broke his own WKU single-season rushing record (1,730) his senior year, good for No. 4 in the NCAA, and scored a Sun Belt-best 16 touchdowns.

The offensive line will be without veterans Ed Hazelett, Sean Conway and Luis Polanco, but will return the signal caller from last season, redshirt senior quarterback Brandon Doughty.

The offense set program records in total yards (5,502), yards per play (6.3) and yards per game (458.5) last season, but according to Brohm, the Toppers need to continue to develop on offense.

“Offensively, we have to keep developing the quarterback position,” Brohm said. “I think we have to find playmakers on offense at the receiver position and get better at that position, so we can throw the ball up the field a little bit. Running back, we’re going to lose a great one, so we have to keep improving Leon (Allen) and get backups ready for him.”

The defensive side of the ball has more holes to fill. The linebacker core will have a new look after losing Sun Belt Defensive Player of the Year Xavius Boyd and Andrew Jackson, who is projected to be a late-round NFL Draft pick. Junior safety Jonathan Dowling left the team early to declare for the draft.

This year’s defense will be led by redshirt defensive back Cam Thomas, who recorded a league-high five interceptions last season and was a team captain in 11 of the 12 games — however, Brohm said the Toppers need to find players to fill the void left by the departure of key players.

“Defensively, we’re going to miss some key guys as well,” Brohm said. “Some big-name guys. We have to find guys that are willing and eager learners that can play fast and learn fast.”

“We had a couple receivers that came in from junior college that made some plays for us today,” Brohm said. “We’re going to have to have that. Our receivers from last year that needed to develop have shown that they’ve improved up to this point, so we have to continue to push those guys to be playmakers for us on offense.”

The Toppers will hold 13 more spring practices — all open to the public — before its scheduled Spring Game on April 19 at 1:00 p.m.