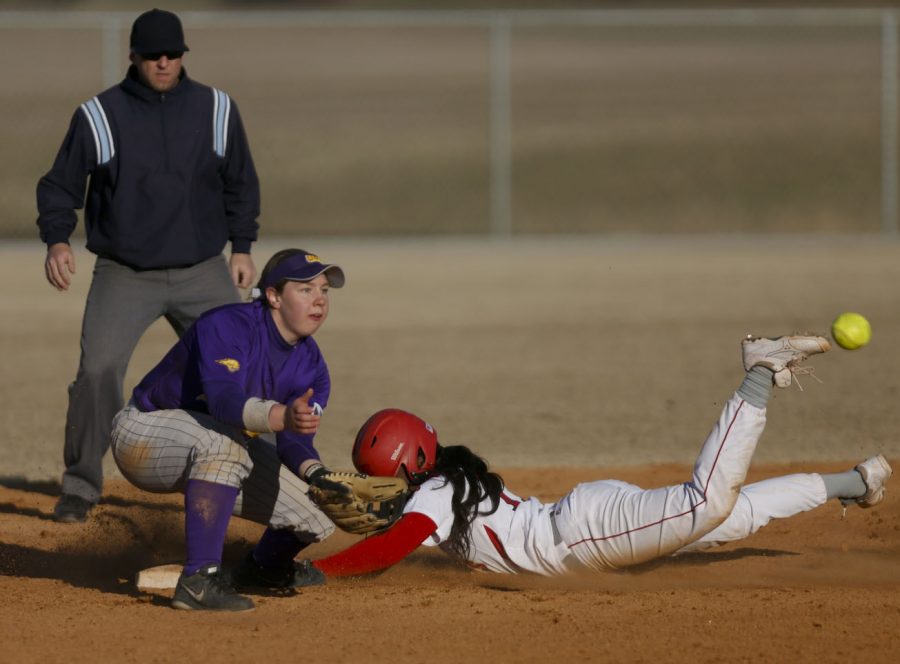 Senior infield Olivia Watkins (17) slides into second base before being tagged out at the women's softball game against the University of Northern Iowa on Friday, February 28 at Buchanon Park in Bowling Green, Ky. The tops lost 3-6. (Kreable Young/HERALD)

In the first game, down 2-0 to Indiana State, WKU used a six-run fifth inning to take the lead and control of the game with a 7-2 win.

Wright State followed and the Lady Toppers allowed their opponents to have a big inning in the top of the fourth – the Raiders scored four runs to break the 1-1 tie and take a 5-1 lead.

However, WKU had a bigger inning in the bottom of the frame scoring seven runs on seven hits and one error.

The highlight of the inning was a two-run blast by senior infielder Amanda Thomas, who tallied five RBI’s on the day.

“Before we go up to bat it was just like take it one hit at a time,” Thomas said. “Get hits in a row, do your job, and then it will all work out in that way.”

Freshman pitcher Hannah Miniard was lights out for the team last weekend in the Hilltopper Spring Fling, pitching two complete games and only allowed two hits and one run. In those two starts she also struck out 17 batters.

However, in relief work on Friday against Green Bay, Miniard struggled. In just 1.2 innings of work Miniard allowed four hits and four runs.

Green Bay, down three, scored the four runs in the last frame to edge the Lady Toppers 6-5.

The next day was a different story for the freshman, who came in against Wright State in relief of senior Emily Rousseau.

In 3.2 innings Miniard gave up no hits and no runs to earn the win and move to 5-1 on the season.

She also struck out six Raider batters in her relief appearance.

“The facts are the facts and (Miniard) knows it and she’s a freshman and she’s learning,” coach Amy Tudor said. “She did a good job (Saturday) bouncing back and that’s what I’m most proud of.”

Although the team went 2-2 over the course of the weekend, in three of the four games the Lady Toppers out-hit their opponents. In the one game they did not, they only had one hit less than opponent Northern Iowa.

The team rattled off 35 hits and 23 runs over the course of four games.

Senior infielder Amanda Thomas played a big part in the offensive success as well. In four games Thomas went 5-for-13 and had eight RBI’s.

She came up big on Saturday, recording five of those eight RBI’s on the second day of play, including a two-run homer against Wright State in the big fourth inning.

She contributed the turnaround from Friday to the energy level and everything coming together.

“I feel like we had a lot more energy warming up,” Thomas said. “That’s a small part but it’s just pretty much how our team is. It transferred to the field. We just all played together. Every aspect of the game was there, pitching, hitting, and fielding.”