WKU shares the ball in win over UALR 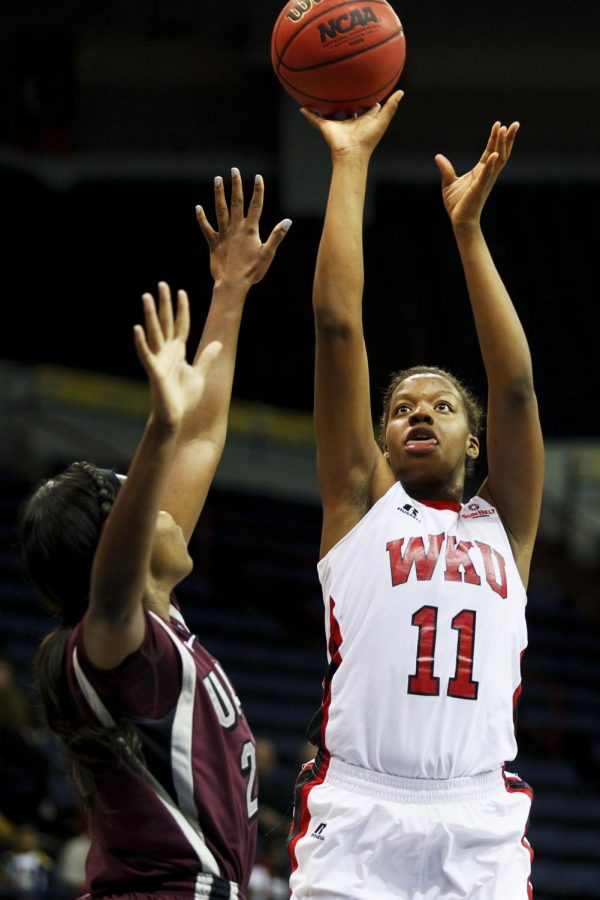 WKU freshman forward Bria Gaines (11) shoots over UALR forward Shanity James (20) during the first half of WKU's game against the University of Arkansas Little Rock in the semifinal round of the Sun Belt Tournament Friday, March 14, 2014, at Lakefront Arena in New Orleans, La. The Lady Toppers won 66-62. (Mike Clark/HERALD)

The Lady Toppers were able to avenge the 58-51 Feb. 8 loss to Arkansas-Little Rock with solid contributions from several different players.

Junior forward Chastity Gooch got off to a hot start, sinking four of her first five shots for 10 points, but when the Lady Trojans’ defensive focus shifted to Gooch, other players helped fill the void, according to coach Michelle Clark-Heard.

Redshirt freshman guard Kendall Noble led the team with 19 points, while sophomore guard Micah Jones had 17 of her own. Gooch finished with 16 points and nine rebounds and junior guard Chanell Lochart had six points and four rebounds.

“I’m super-excited that we have the opportunity to have different options,” she said. “Micah Jones was huge for us. Chanell Lockhart was great for us coming out of the locker room. We just have a lot of people step up for us and when you’re in this time of the season, that’s what it’s about — team basketball.”