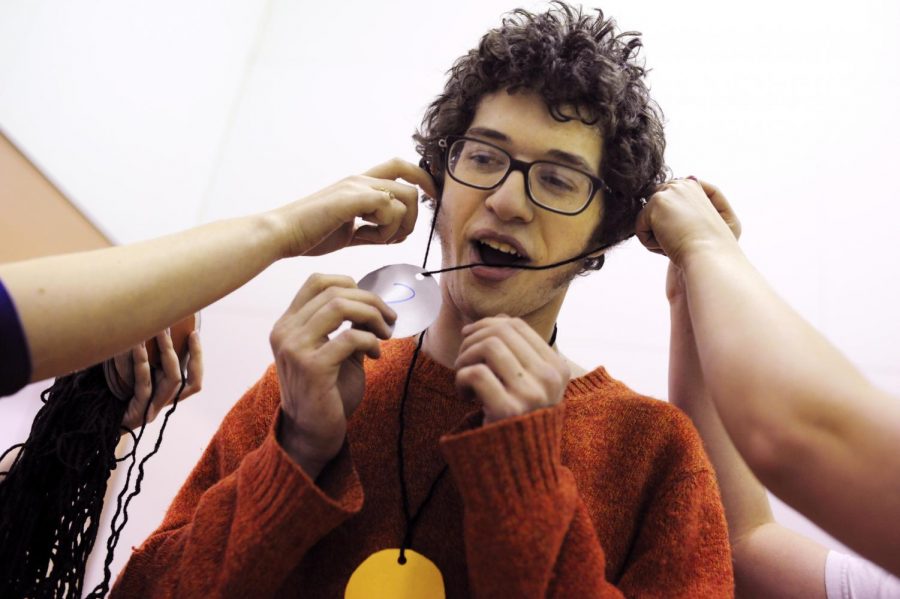 Cheers, laughter and shouts of “take it off” echoed through Preston Center on Friday night.

WKU’s International Club hosted its own Olympic games on Friday, which included a relay that had team members put on extra clothes given to them, run down the track, and take off the clothes to give to their team member.

Louisville senior Valerie Farsetti, president of the International Club, was involved in all aspects of the Olympics from planning to giving out instructions for each game.

“Only strip the clothes we gave you,” Farsetti said.

The members of the club were divided into three competing teams that they decided to call Nepal, Madagascar and Saudi Arabia.

These teams then competed in a series of Olympic-like events, which included relays, juggling and their own version of ice-skating called “sock-skating.”

Madisonville senior Donae Morrow got into the spirit of the game by cheering on his team, Nepal, during all of the Olympic games.

“I could be in my dorm or studying or doing something else not fun, but I’m out here having fun with cool people,” Morrow said.

The goal was to get both American and international students involved and to be as representative as possible of the real games at the Olympics.

“It’s something that is clearly a world-wide event, so we wanted to take advantage of that,” Farsetti said. “Our club is pretty much about promoting intercultural relationships.”

This was the first time the club had hosted an Olympics. After the event, they went to go eat pizza and watch the Sochi 2014 Winter Olympics.

Recent WKU graduate Amanda Pascoe said not having snow made it difficult to plan some of the games.

“I think that they are doing a good job trying to come up with games that relate to the Olympics, yet you can still do them inside,” Pascoe said.

Farsetti said that the club planned the entire event at its first meeting and used Google and creativity to get ideas for the games that they played.

Treasurer Megan Murphy said that although the juggling of the soccer ball did not have any significance to the Winter Olympics, it was a member suggestion.

“A lot of international students are really good at soccer,” Murphy said. “It is one of their favorite things to play.”

Sophomore Domenicka Mendoza Cevallos from Guayaquil, Ecuador, agreed and said she was most excited about juggling the soccer ball.

The grand finale of the event was a race where team members ran down the track, did lunges to the door of the racquetball room, crab walked to the end of the room, army crawled to the center, and finished with a series of push-ups.

Farsetti was surprised at how quickly people finished that event.

“I kind of expected it to take longer than fifty seconds,” she said.

Murphy said that the point of the games was to encourage teamwork so she made a special MVP medal along with bronze, silver and gold medals for the participants. This MVP medal was supposed to go the most cooperative player.

“I think it was all because of the encouragement of my teammates,” he said. “Without them I wouldn’t be able to get as many medals as I did.”

The International Club has about a 50/50 ratio of American to international students, and hosts events throughout the year to promote a shared, intercultural experience.

“I have always been interested in international culture,” Farsetti said. “I guess you could say it’s my comfort zone, but it’s also my main interest so I sought it out when I got here.”