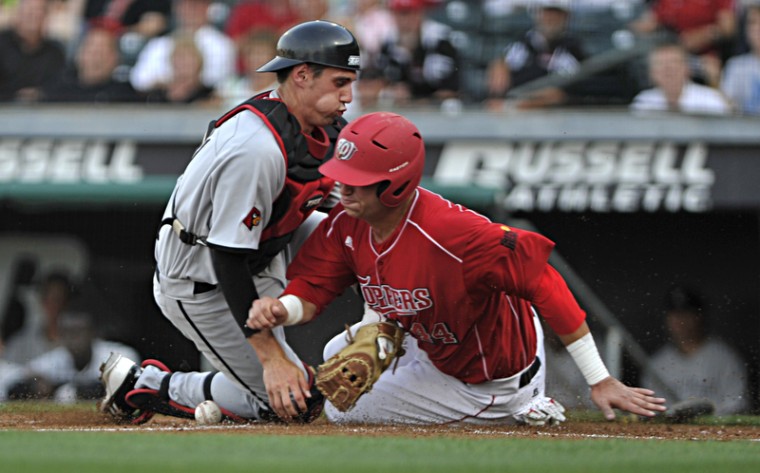 Junior infielder Ryan Huck slides into home plate in the bottom of the second inning to score a run Tuesday night at Bowling Green Ballpark. WKU beat the No. 18 ranked, in-state rival Louisville 8-1.

With Huck graduated and working his way up the Oakland Athletics’ minor league system, though, WKU coach Matt Myers is hoping to replace the production of one great player through stronger performances from several good, improved players who round out the current roster.

“I think instead of one guy, I’d like to see it be produced through the nine guys in our lineup,” Myers said at Media Day on Tuesday. “That’s the thing — I think our lineup is a lot deeper one through nine. The seven, eight and nine who we’re going to roll out there Friday, if you make a mistake, we’ll hit one out on you.”

Myers is trying to replace a dollar with four quarters, and that makes sense. But Huck and his numbers — a .367 batting average, 72 hits and 16 homers in 196 at-bats — might have been worth even more to the Toppers.

His players are probably lucky he’s not expecting any of them to reach those numbers, but Myers pointed out seniors like shortstop Scott Wilcox and outfielder Regan Flaherty as guys who can help pick up some of that lost production.

“That’s very difficult — to put those kind of numbers on somebody, but I think we have guys capable of putting up big numbers,” Myers said.

Wilcox, Flaherty and the rest of the Toppers might have the confidence of their coach, but they’re going to have to work to get that respect from the rest of the league. WKU was picked to finish sixth in the Sun Belt earlier this week by conference coaches.

The Toppers looked good at times last year, with story lines like an 18-inning win over Kentucky at Bowling Green Ballpark and Huck’s memorable stretch highlighting the season, but they finished at 28-29 with middling stats in league play. They’ll have to do better if they hope to make postseason appearance in their last season in the Sun Belt Conference.

Myers looks at Louisiana-Lafayette — league champion last year, and the favorite this season — as inspiration. He said the Ragin’ Cajuns’ depth is something he hopes his team can duplicate.

“Last year the toughest lineup we faced was Lafayette,” he said. “It just seemed like every inning it was the same guy who was at the plate and that’s really tough from a pitching standpoint, especially on the weekend, and that’s what I want to see from our lineup.”

It’s never a bad thing to look like the best. But with the season set to start tomorrow, it’s time for the Toppers to prove they can actually be the best.