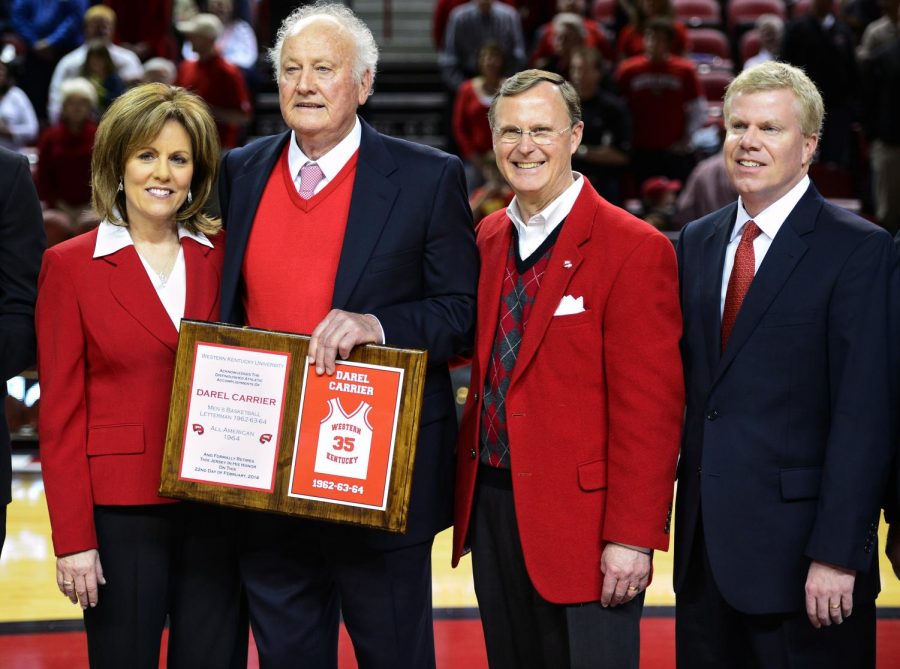 Former WKU basketball player Darel Carrier poses for a photo with his wife, Donna, President Gary Ransdell and Athletic Director Todd Stewart as his jersey number is retired during a special halftime ceremony on Feb. 22. Carrier played for WKU from 1962-64, and became the eighth Hilltopper to have his jersey retired. (Ian Maule/HERALD)

Before Saturday night, only seven men have can say they have made their WKU basketball jersey memorable enough to hang from the rafters of Diddle Arena.

Darel Carrier became the eighth former Hilltopper to have his No. 35 jersey retired in a special halftime ceremony during the WKU-Louisiana-Monroe game Saturday night.

Carrier joins an elite group of names of E.A. Diddle, Clem Haskins, Tom Marshall, Jim McDaniels, John Oldham, Carlisle Towery and Bobby Roscoe as the only Hilltoppers to have their numbers hung from the rafters in Diddle Arena, representing that no one will ever wear that number in a WKU uniform again.

Carrier and his family met president Gary Ransdell and athletic director Todd Stewart at center court, where he was greeted by a standing ovation.

Carrier took the microphone and thanked everyone who put together the honor, his family and the Topper fans.

Carrier made a living off his jump shot. That jumper totaled 1,318 points in his three year career from 1961-64. That total was the sixth most when he left the Hill and still ranks no. 18 of all time.

His 19.1 points per game for his career was third-best for a Topper in his time and is still fifth best in program history.

In his senior season he averaged 26 points per contest, which was the highest ever until Jim McDaniels’ broke that record with 29.3 points per game in 1970-71.

On Feb. 11, 1964, Carrier scored 50 points against Morehead State, which is still the third best scoring output of any Topper ever and is the best scoring performance ever on the road.

After his WKU career, Carrier was selected no. 76 overall—the draft used to feature more rounds—in the 1964 NBA draft by the St. Louis Hawks.

He played for the Phillips 66ers before finishing his pro career in the American Basketball Association (ABA) with the Kentucky Colonels and the Memphis Sounds.

WKU coach Ray Harper said he never saw Carrier play in college, but he got to see him with the Colonels.

Harper said he ran into Carrier prior to the game Saturday night and Carrier told him that he never shot an air ball in his career.

“I can believe that,” Harper said. “He was a shooter and a great player.”

Carrier was one of the first shooters to utilize the three-point shot. The ABA adopted the long range ball years before the NBA and Carrier used it to his advantage, becoming one of the greatest pioneers for the long range jumper, a shot that plays a pivotal role in basketball today.

His career three-point percentage (37.7) is the best ever in the ABA, according to Basketball-Reference.

“It was a natural for me,” Carrier said.

Following his playing career, he returned to Warren County where he and his wife Donna still live today.

“I want to be remembered as being rough and tough and could shoot from anywhere anytime because the coaches gave me that kind of confidence,” Carrier said. “If you put them in the hole, they’ll let you shoot anytime you want to.

“That’s the way the coaches treated me, if I had any kind shot they’d say put it up and I was blessed with a shot that would go in.”​