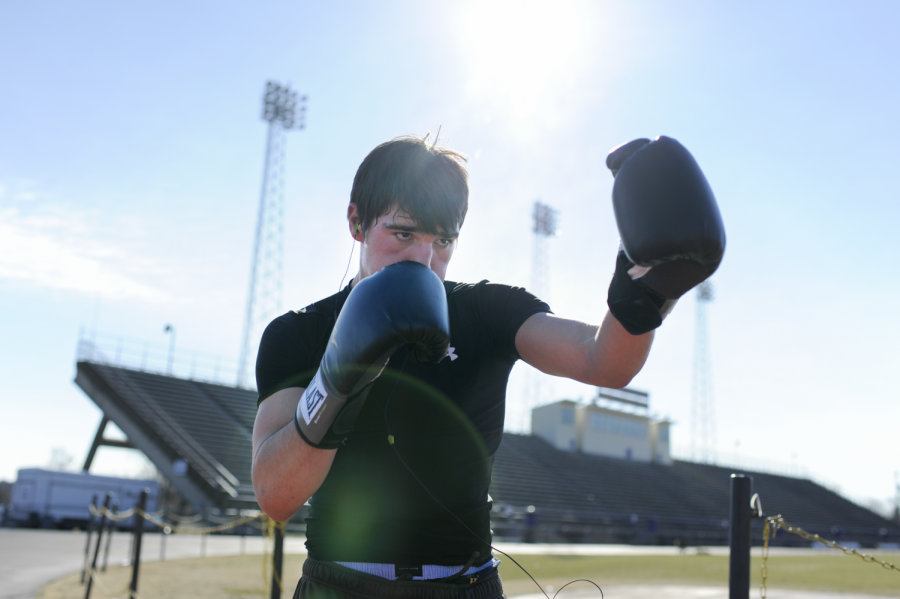 Bowling Green sophomore Chase Proctor shadow boxes around the track at Bowling Green High School in preparation for Sigma Chi Fight Night. Proctor is one of several WKU students who will be fighting tonight at the Blue Dome in Lampkin Park. (Ian Maule/HERALD)

Boxers will be taking the blow for cancer this Thursday and Friday night.

Sigma Chi fraternity will be hosting their philanthropy event “Battle of the Greeks” to raise money for cancer research.

The proceeds will go to the Huntsman Cancer Institute.

The competition, also known as Fight Night, is a boxing tournament that takes place over two nights. The championship match will be held on Friday night.

Greek organizations sponsor boxers to represent them in a boxing match. This year 24 boxers will compete in the tournament.

The event will take place at the Jaycees Pavilion, or the Blue Dome, in Lampkin Park beginning at 7 p.m. both nights. Tickets for the two nights are $25 for two and $15 for one. Tickets are being sold at Downing Student Union and will also be sold at the door, but are limited. The event sold out last year.

The tournament is open to the public.

Fight Night is not only popular among Greek students, but all WKU students as well. Students from other schools even travel to Bowling Green to watch and compete in the event.

“Fight Night gives the Greek community and the entire WKU student body an opportunity to have fun regardless of what letters you wear on your chest,” Sigma Chi sophomore Chris Peege said.

Shogun will be selling food at the event.

Fight Night is the last event of the week for Sigma Chi’s Derby Days. Other events that took place during the week included a trivia night, a dinner at Linzie’s and a pageant. All money raised from this week will go to their philanthropy.

“I’m excited to see all the hard work our chapter has put into making this event possible,” Peege said. “As men of good character, we strive to put on the best event on campus not for ourselves or to represent our fraternity, but to raise money for the well-being of others.”