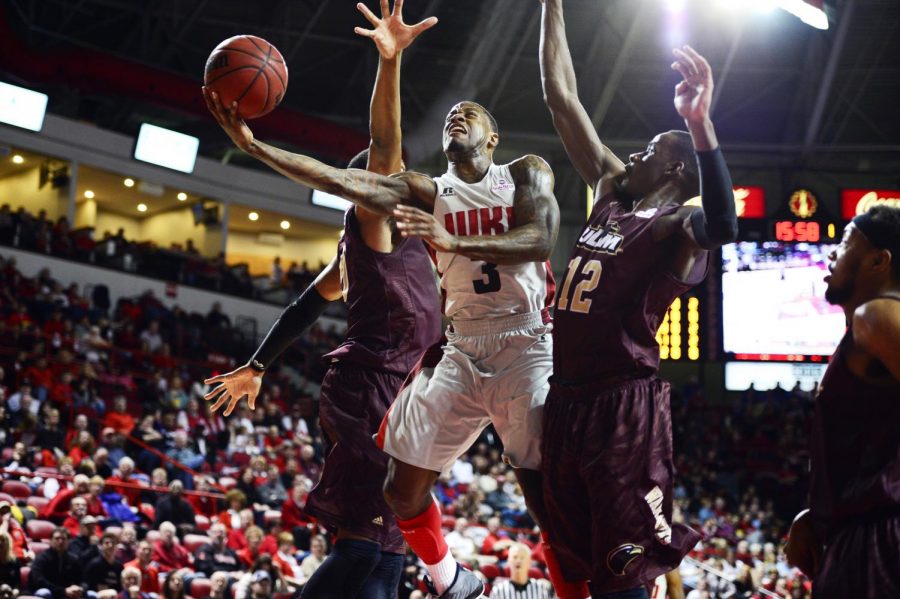 Junior guard Trency Jackson drives past Louisana-Monroe junior center Marvin Williams and junior forward Tylor Ongwae during the first half of their game at Diddle Arena on Thursday, Feb 22. The Toppers defeated the Warhawks 72-63. (Ian Maule/HERALD)

WKU has adopted a “next man up” attitude all year long. On Saturday against Louisiana Monroe, it was sophomore center Daouda Soumaoro’s turn to step up.

Sophomore center Alek Rostov, who has started 26 games in two years, held down the starting center spot, but has suffered a blood clot and the team is currently doing what’s in his best interest to keep the big man healthy.

Since his absence, the Toppers have missed his size and length down low. Soumaoro answered that challenge against ULM, earning his first career start as a Topper.

“Rebounding is one of my strengths so (coach Ray Harper) basically told me ‘if you’re going to rebound for me, I’m going to play you a lot of minutes’,” Soumaoro said.

He also became the buzz in the Topper crowd. Fans raved at Soumaoro’s length and awed at one play in which he dove on the floor for a loose ball. At the end of the game, he was given a last cheer from the crowd.

He blocked just one shot, but blocked multiple feeble shot attempts with his long limbs.

“I thought our defense was better because he was in there,” WKU coach Ray Harper said. “I just felt like we needed a presence and I thought Daouda was that.”

The Toppers jumped out to an 18-1 lead and held the Warhawks without a basket from the field for the first nine minutes of the game, most of those minutes with Soumaoro manning the paint.

The 6-foot-9, 235 pound center has extremely long arms and he kept those wings active around the rim, noticeably bothering ULM players who wanted to attack the basket.

Soumaoro embodies the “next man up” mantra.

The sophomore center suffered two anterior cruciate ligament (ACL) injuries at Iowa Western Community College, but has battled back from both occasions.

“I can start seeing his agility starting to come back,” Harper said, “That was a kid that used to put his elbows over the rim, so he’s trying to find a new way to play.”

Harper said the one thing you don’t want, as a coach, is “guys that are selfish or that care about themselves more than the team.” He said that Soumaoro always has a good attitude.

But with a performance like the one he had against ULM Saturday, it isn’t hard to imagine that Soumaoro might have more opportunities to play, and start, in the immediate future.

“I just got to keep working on my rebounding, defensive end and I’m going to do the best I can to help the team win games,” Soumaoro said.

In all, 11 guys played in the first half against the Warhawks.

Junior guard Trency Jackson, who led the team with a career best 25 points, said that he was proud of how everyone on the team stepped up.

“Everybody was ready when their name was called, once again,” Jackson said.

But it was Soumaoro who was prepared in the biggest way.

“I’ve always told guys, you will get an opportunity at some point in the season and be ready for when that comes,” Harper said. “It’s much like a job. You never know when that opportunity is going to come to you, so be prepared. He was prepared.”