Hilltoppers advance to Sweet Sixteen for 1st time in program history, to play No. 2 Kentucky 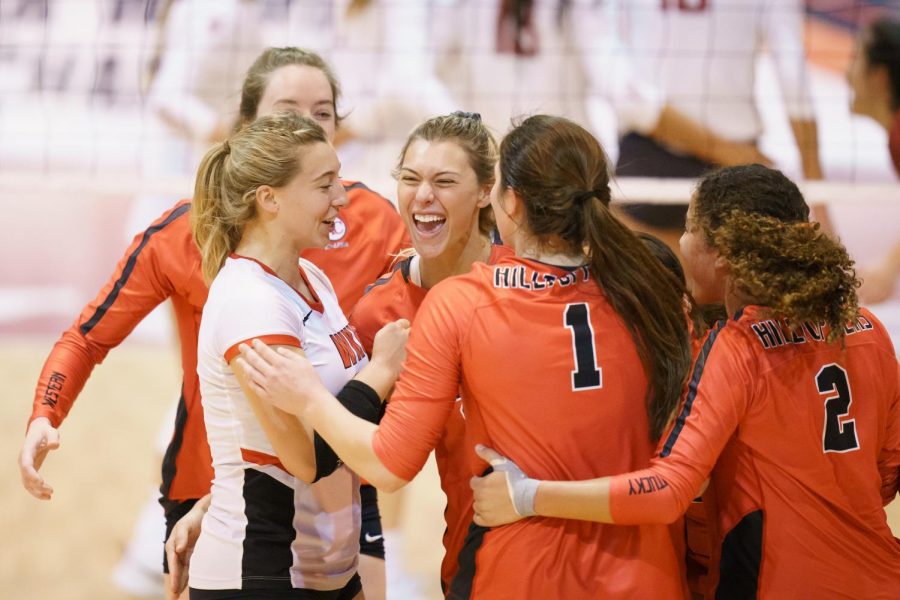 WKU celebrates winning the second round of the NCAA Tournament after taking down No. 15 Washington State in five sets on April 15, 2021.

WKU (23-0) won 3-2 against No. 15 Washington State (11-5) in the second round of the NCAA Tournament on Thursday evening. This is the first time in program history WKU and head coach Travis Hudson have advanced to play in the Sweet Sixteen.

WKU and No. 1 Wisconsin are the lone programs left in the nation who are undefeated.

“This is all fairy tale stuff for me and our program,” Hudson said. “To be back in this tournament and to get a win in the first round and now we’ve found a way to beat a seeded team and get to the Sweet Sixteen round is just something that’s pretty magical and that’ll stay with this program for a long time.”

The Hilltoppers are now 1-1 all-time against the Cougars after dropping the first match 3-1 back on Sept. 14, 2018 in Diddle Arena. Hudson is now 6-12 all-time in the NCAA Tournament following Thursday night’s five-set match.

“I don’t even know how to feel,” junior middle hitter Lauren Matthews said. “When the ball dropped I was kind of in shock, like, we just did that.”

WKU will now play in-state powerhouse No. 2 Kentucky (20-1) on Sunday at 9 p.m. in the Regional Semifinal of the NCAA Tournament.

“They’re a team that I think could go all the way to the end of this thing and win it, so we have nothing but respect for them,” Hudson said of Kentucky. “We know that it will be a tall task for us on Sunday but we’re glad to be in that match and we’ll certainly try to spoil those plans for them.”

Jackson said the schedule Travis set up for the team has helped them conquer these Wednesday and Thursday night matches.

“We built in a little nap time, we stay focused, we have stretches, we watch film,” Matthews said. “It just made us stay focused instead of laying around. That’s how we got here. You’re ready to go, every day. Which really great job to him for just getting us set up to do that.”

WKU was first to get up on the scoreboard Thursday night with a kill by Matthews followed by an ace by junior Ashley Hood. WKU saw an early 4-0 lead after two attack errors were added onto the run.

A kill from Briggs got WKU its 10th point of the match while WSU trailed by six, the largest lead the Lady Toppers had seen so far.

The lead was shortened to just one point after WKU committed five errors.

A kill by Isenbarger was followed by the first media timeout of the night. WSU was able to gain a point coming out of the timeout due to a WKU service error.

After keeping a lead the entire duration of set one, WSU knotted it up 17-17 after Cougar sophomore Magda Jehlarova hit a kill. A kill by Matthews prevented a WSU lead. The respective programs saw two more ties. Kills by Matthews and Briggs again prevented the Cougar from taking the lead.

A WSU attack error that brought up the Hilltoppers’ lead to two points was continued by the first timeout of the match taken by WSU.

For the first time since the score was 14-11, WKU was able to achieve a three-point lead 23-20 from a service ace by Dieudonne. This ace was her first of the match and WKU’s third. Then WSU called another timeout.

A kill by WSU’s Pia Timmer and an ace from Julia Norville followed the timeout. WKU then called its first timeout of the set while holding a one-point lead 23-22.

A kill by Briggs led to set point. A WSU attack error succeeded the play, bringing in the first set 25-22 for WKU.

Set two began with a hard-fought play concluding with a block by Matthews allowing WKU to gain the first point of the set. WSU was then able to get a point in the next play with a kill from Jehlarova.

WSU saw its first lead of the match 3-2 after a WKU attack error.

Just two plays after being substituted in, Hallie Shelton hit the first ace of the set for the Hilltoppers, bringing up WKU’s lead 8-6.

A kill by Briggs let the Lady Toppers see its 10th point of the set. A solo block from Matthews was followed by WKU cheers and WSU’s first timeout of set two.

Isenbager came out of the timeout with an ace, pushing the Lady Toppers lead up to four points.

The Cougars were able to see their first ace of the match from Hannah Pukis, shortening WKU’s lead to 13-12.

WSU took a 15-14 lead after kills by Kalyah Williams and Timmer. A kill from Matthews and a Cougar bad set then closed WKU’s trailing score and brought them back up 16-15.

A WSU ball-handling error and an ace by Shelton allowed WKU to climb its way to a three-point lead. As a result, the Cougars called a timeout.

WKU saw the 20th point of the set due to a kill from Isenbarger. Three blocks in a row from Kayland Jackson, Briggs and Isenbarger brought the score to 23-18.

A kill from Briggs with an assist from Dieudonne led set two to set point. WKU was able to bring in another set win 25-20 with a block from Isenbarger and Jackson.

“The fact we hit .300 against a team that’s that physical is mind boggling to me,” Hudson said of his team’s performance. “To out block them 11 to 6 is certainly a huge number in this game and I wouldn’t have that would have been the case.”

Matthews was again able to get WKU up on the scoreboard first with a kill to open the third set.

WKU went on an early 4-0 run including kills by Briggs and Dieudonne, and an ace from Shelton. Briggs was the first player of the match to hit double-digit kills putting WKU’s third point up on the board of the set.

A kill by Dieudonne, her second of the match, followed the timeout, bringing WKU’s lead up 6-2.

Logan Kael hit an ace, letting WKU see its largest lead of the set so far at five points. Kael was WKU’s fifth player to hit an ace throughout the match.

WKU was able to achieve the largest lead of the match, 14-8, after a WSU bad set. This point was challenged by WSU’s Head Coach Jen Greeny. Both teams had now used up available challenges.

A WSU 3-0 scoring run including a kill by Williams and back-to-back aces from Julia Norville led to a 17-17 tie and WKU called its first timeout of the set.

A kill from WSU’s Williams allowed the Cougars to lead 18-17, their second lead of the set, the first being at 2-1.

Two more ties followed, and the Cougars were able to jump up to a two-point lead after kills from Timmer and Jehlarova. This newfound lead for WSU led to a WKU timeout.

WSU was able to get its first set win of the night following a kill from freshman Julianna Dalton and an ace from senior Penny Tusa. The Cougars won set three 25-21. This was only the fifth set WKU has lost all season.

A WSU attack error began the fourth set. The Cougars were able to see an early on four-point lead over the Lady Toppers.

The Cougars were then the first into double digits.

WKU battled back from a 10-7 deficit and brought it within one on a kill by Briggs. Then an attack error from Williams knotted the match up at 13.

The Cougars would extend its lead to 15-13 prior to the first media timeout of the fourth set. A block from Dieudonne and Isenbarger followed the timeout, bringing the score to 14-15. WSU continued to pour on its offensive success late in the match going up 20-16 before Hudson called a timeout for WKU.

“Just to see it all come together for her on the biggest stage and to see a kid like that who plays the game with such joy is just a fulfilling thing for me as a head coach,” Hudson said of Isenbarger’s play this postseason.

WSU increased its lead to five points after the timeout with an ace from redshirt sophomore Aria McComber. The Cougars went on a 5-0 scoring run, increasing their lead 24-16.

The run was cut by a kill from Isenbarger, giving WKU its last point of set four. A kill from WSU’s Dalton led to a WSU set win 25-17. WKU had not given up back-to-back sets prior to dropping the third and fourth set against the Cougars.

Jackson said Isenbarger has stepped up and has played amazing.

“I am so proud of her,” Jackson said. “She’s worked really hard to get here, and in the crucial times, she has stepped up every single time we need her this year, even in the conference tournament. She was blowing it out of the water.”

This set is the first time WKU has played a fifth set all season.

For the fourth time in Thursday’s match, Matthews was able to get WKU’s first point of the set with a block.

Matthews brought in all four beginning points for WKU until a WSU attack error allowed a point for the Hilltoppers.

A WSU attack error and a solo block from Briggs led to a 6-3 lead and a WSU timeout.

The Cougars went on a 4-0 scoring run after the timeout with a kill from Timmer and an ace from Norville. Two WKU errors also contributed to this run.

A kill by Briggs stopped the run and tied the set 7-7. The Lady Toppers were able to break through after Isenbager hit a kill bringing the score to 9-8.

Matthews broke the tie with a kill. A Cougar bad set then increased WKU’s lead 12-10, which was continued with a WSU timeout.

Shelton came out of the timeout hitting a kill. Back-to-back kills from Matthews brought in the fifth set of the night with a five-point lead, 15-10.

“They’re a bigger, stronger, more athletic version with the same kind of balance,” Hudson said of Kentucky. “They’re just a really complete team from top to bottom and it’ll take a monster effort for us on Sunday, but you know I think Kentucky knows that we’ll be ready when we come out there on Sunday.”

Jackson said that the team needs to play hard, stay aggressive and stay locked in for Sunday’s match.

“Ultimately the aggressor ends up winning,” Jackson said. “It’s the Sweet Sixteen, so, it’s whoever wants it the most.”

She said that there are no words for the program’s first-ever journey to the Sweet Sixteen, and that it’s just amazing.

“There’s nothing to say but just pure joy and happiness,” Jackson said. “We’re so excited to be here.”