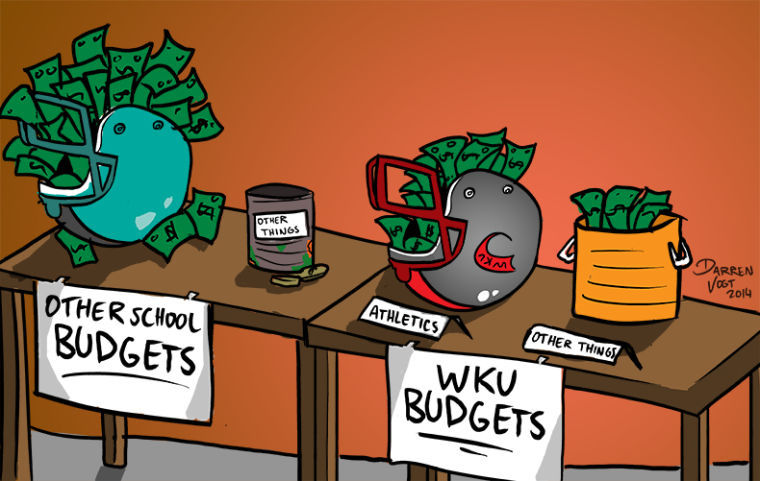 THE ISSUE: Last week, the Herald cited data produced by the Knight Commission in an article that claimed WKU spent approximately $36,000 per student-athlete and approximately $11,000 per full-time academic student — a discrepancy of nearly $25,000.

OUR STANCE: We definitely see the disparity between the amount spent on students versus student-athletes. However, when we looked into the Knight Commission’s findings on other conferences, the numbers began to make more sense, and we found the good in WKU sports.

After shirking off our initial surprise, we decided to consult the Knight Commission website and determine exactly how WKU fared among the rest of the Sun Belt Conference.

According to the report, the average amount of money spent on each student-athlete in the Sunbelt Conference in 2011 was $25,404. The mean allocation among Sun Belt schools for full-time academic students totaled $11,038.

These numbers helped us to put WKU’s numbers into context, and got us really thinking about what sports mean to WKU.

With the Topper football and basketball programs on an upswing, sports definitely bring a lot to WKU, including revenue from ticket sales, donations from alumni and name recognition that helps bring in potential students and student athletes.

Sporting events wouldn’t be what they are on our campus without someone to check the tickets, to man the concession areas and to provide security. Members of the community are given the opportunity to find employment at WKU, and in this way WKU helps to give back to Bowling Green.

WKU sports provide an opportunity for athletes to continue their athletic careers. The report does raise a number of questions and we think that it only touches the tip of the iceberg in terms of the dialogue that needs to happen.

This editorial represents the majority opinion of the Herald’s 9-member editorial board.