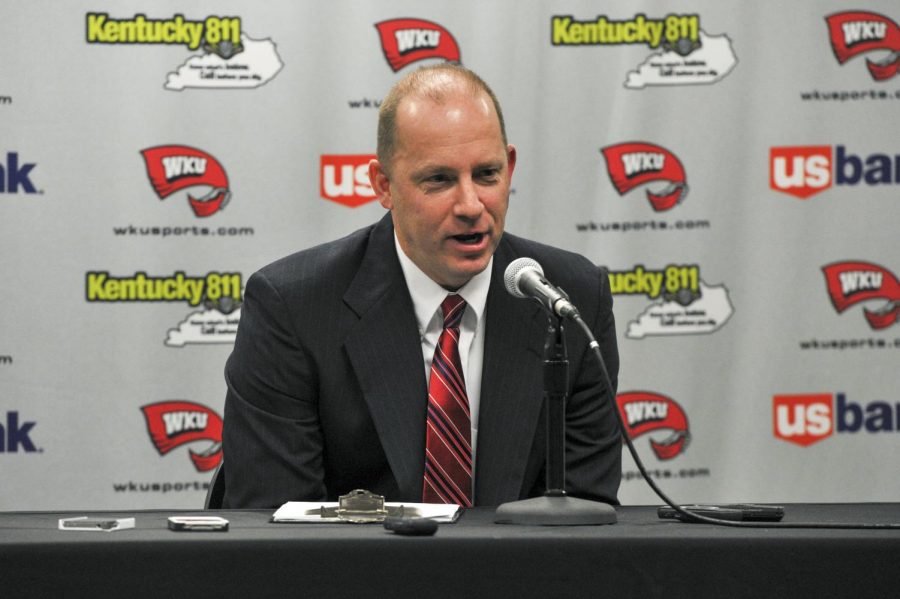 "We are happy to get these guys and we think they will be excellent players for us," WKU football Head Coach Jeff Brohm said of the 2014 WKU football signing class during a press conference with media outlets on Wednesday, Feb. 5. WKU signed 15 players, 10 of which hailed from Kentucky. The new roster also featured Mr. Kentucky, Nacarius Fant, and Mr. Tennessee, D'Andre Ferby. (Jeff Brown/HERALD)

New coach Jeff Brohm made a statement at Wednesday’s press conference announcing WKU’s 2014 signing class about the recruiting process this year, and the statement says a lot about how far the Topper football program has come in the past few years.

“We even had to turn away guys,” the coach said. “There were guys that called and wanted to commit and we were full. We had to explain that to them but that’s just a testament to how well the recruiting has went and how easy it is of a sell of this university.”

Brohm’s first recruiting class doesn’t look like the classes former coaches Willie Taggart and Bobby Petrino brought in. The coaches passed on trips to Florida in favor of picking up local players that stood out on the high school circuit.

The class might not have a lot of players who stand out nationally, but three years ago the Toppers were trying to reel in recruits after winning four games in three years. I bet a few of those players WKU had to turn away this season would have gotten the nod if they had graduated a few years earlier.

Bowling Green High School star wide receiver Nacarius Fant, Kentucky’s Mr. Football from this season, committed to WKU months ago and has been a vocal supporter of the Toppers since. WKU also received a letter of intent Wednesday from Ensworth High School running back D’Andre Ferby, a Nashville native who won Division-II Mr. Football in Tennessee this year. Pulling top-tier local recruits like that should be a big plus for a coaching staff looking to make a name as a top program in the region.

Consistently pulling good recruits is going to be an important challenge for WKU as it continues to make the transition up from the Sun Belt Conference to Conference USA. This is the first offseason the Toppers have been able to tell recruits they will be playing in C-USA and according to Rivals.com’s recruiting ranks, WKU has the No. 2 class in the conference already. That’s a good start for a team that still has the Sun Belt logo on its field.

The bottom line, though, is that every fan base is optimistic on National Signing Day. Every fan base likes to think their school has brought in recruits capable of competing for a title, or at least winning more games. It’s how those players perform when they actually take the field that makes a good recruiting class. This group of players might look good on paper right now, but they’ll really start to create their legacy moving forward.