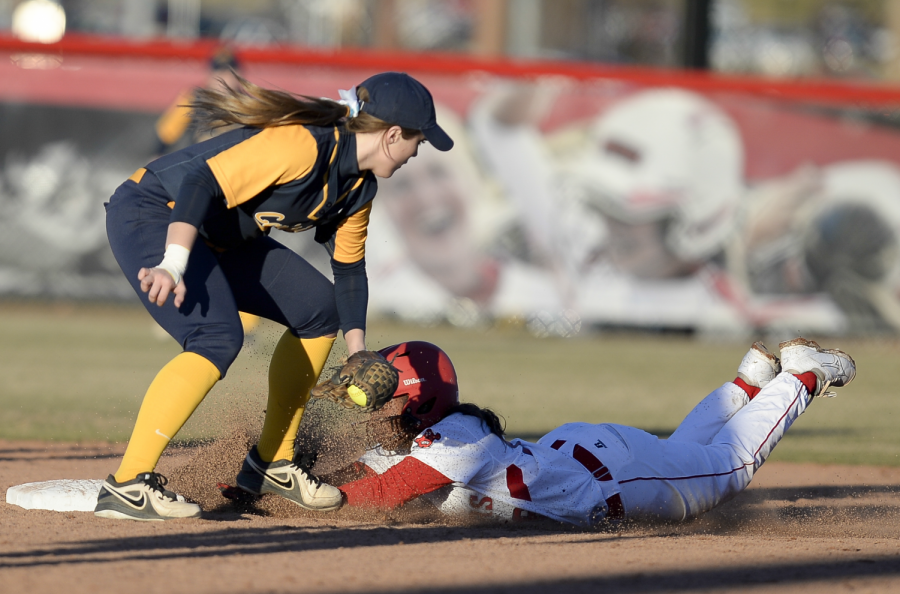 WKU junior outfielder Shawna Sadler strains to hit the base before Canisius junior second baseman Robin Kenneryas can tag her out. Sadler she successfully stole second beats, and WKU went on to win 8-1 Friday at the WKU Softball Complex. (Jeff Brown/HERALD)

Over the course of last weekend, WKU (9-4-1) went a perfect 4-0, only allowing three runs in those four games. The team is looking to build off that success in the upcoming weekend.

“Everyone hit really well,” junior outfielder Shawn Sadler said. “Everyone came together really well, our dugout was up. Our defense went well. It was just a good weekend overall.”

Senior pitcher Emily Rousseau said that over the weekend the team found out some good things about themselves.

However, there are still things that can be improved upon that the team saw over the course of the weekend.

“Things to work on is just continuing to shut the door and continue trying to shut out the teams,” Rousseau said.

There will be challenges for the team in the games this weekend. According to Tudor, the teams this weekend will be heavier competition than last weekends.

Two of their opponents have played teams ranked in the top 25 and one of those teams, Northern Iowa, has come out on the winning end.

Northern Iowa (8-5) beat No. 25 Texas earlier this season. At the time Texas was ranked 10th in the nation. The Panthers also played No. 22 Louisiana-Lafayette, a team WKU will face later this season in conference play, and lost in extra innings.

“I feel like UNI is going to come in with a heavy hitting team,” coach Amy Tudor said. “(They’re) very well coached and it’s going to be one of the teams to beat.”

Also on the slate for WKU is Indiana State, who is currently 5-3.

Despite its 0-5 record, Wright State played the No. 1 team in the country at the time, now No. 3, in the Tennessee Volunteers. Tennessee is still undefeated and beat Wright State 10-2 on Feb. 16.

Sadler said it will be good to play teams that have competed against good competition so far this season.

The last two teams in the tournament this weekend is Green Bay and IUPUI (5-6). Green Bay has yet to play a game this weekend and WKU will open the weekend with a game against them on Friday at 10:30 a.m.

The Lady Toppers will play another game on Friday, two games Saturday, and one on Sunday. All games will be held at Michael O. Buchanon Park on Nashville Road.