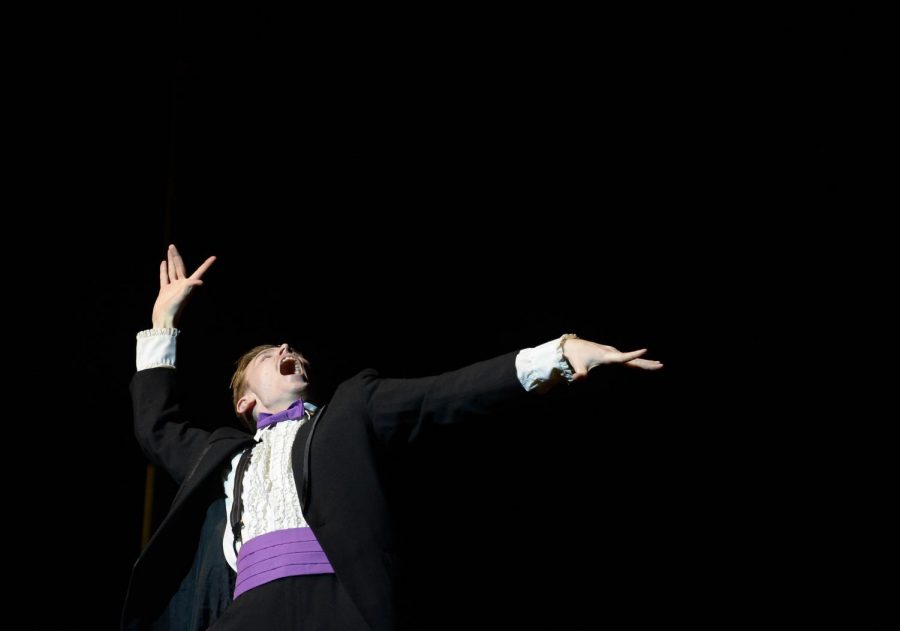 Louisville junior Will Linder directs and sings during the rehearsals of "Curtains" on Sunday, Feb. 23, at Van Meter Hall. (Jeff Brown/HERALD)

WKU’s Department of Theatre & Dance will open its 2014 main-stage season on Feb. 28 through March 2 with the Broadway hit, “Curtains.”

Sam O’Mara, a 22-year-old Maysville senior and one of the assistant directors of the show, describes “Curtains” as a whodunit based in 1959 at a Boston theater.

“Mysteriously, there is a tragedy that occurs on opening night of their previews,” O’Mara said. “The show is about how a cast and crew and a few detectives from the Boston Police Department work together to not only save a show, but save themselves from a murderer who has infiltrated the theatre.”

“He’s the main backer of the show and has given the most money to it out of anybody,” Dant said. “Up to this point, he hasn’t really been involved with theatre before, but for some reason he decides to back this one.”

O’Mara said the highlight of any production is getting to a point where actors know their lines, songs and choreography.

“You see a run of the show in a rehearsal studio for the first time and something just clicks after the trouble of calling, ‘Line!’ and people forgetting what they’re doing,” O’Mara said. “There’s a moment where everything just seems to go right and in that moment you realize how good of a show you have. That’s the moment every person strives for.”

O’Mara said the cast and crew of “Curtains” have had that “moment” and have seen how good the show will be.

“Opening night is the relief,” O’Mara said. “The payoff is seeing the show before everyone else and knowing you had something to do with this great piece of art that’s about to happen.”

“We’ve only been doing this for about the past month and now it’s about open,” Dant said. “There’s been so much done in such a short amount of time, and it’s just really cool.”

O’Mara said another highlight is getting to work with all of his best friends.

“You have no choice but to be best friends with everyone,” O’Mara said. “You become so close with the cast and crew. That’s just another reason we all do this to ourselves.”

O’Mara said he thinks “Curtains,” although not as well known as some shows done at WKU in the past, will be greatly received by audiences.

“Not only is it a whodunit … but the music is incredible and empowering and fun, and the show will make you laugh,” O’Mara said. “It’s a little raunchy, not going to lie, but it’s appropriate for everyone over the age of 13.”

Dant said “Curtains” is “a little more adult” than other musicals, but a very inviting show.

“There’s a lot of very straightforward humor where anybody will get the laughs and there’s some that’s more mature for an older crowd,” Dant said.

Dant said “Curtains” combines several different genres that people might not think would work together.

“It pulls everything together in a very well-done, well-implemented way,” Dant said. “People will also gain some musical theatre knowledge because there’s a couple jokes based off of other shows or things that happened on Broadway.”

O’Mara said he hopes people will realize they’re watching a show that transcends its own genre and time.

“I think it will show people that it doesn’t matter what you’re watching, it’s always a good performance if you give yourself to it,” O’Mara said.

“This show is easy to fall into as an audience member. I hope people enjoy it and laugh and their hearts are warmed. I hope they leave with a smile on their face because it’s a fun show, and I hope they have fun,” O’Mara said.

Dant said when people do theatre and show off what they’ve done and worked hard to do, it brings fulfillment to watch them.

“When I see someone walk out at curtain call and I can say, ‘Wow, they really love what they’re doing,’ it drives me to do better,” Dant said. “It’s inspiring, and it makes me say, ‘I can do whatever I want. I can do anything.’”

O’Mara said the biggest questions people sometimes have about productions like “Curtains” are ‘What’s happening?’ ‘What’s going on?’ and ‘Why are so many people excited to see this?’

“I feel as if this show has a lot of grand qualities and a lot of attractive qualities, but I think the biggest quality is that it’s appealing and there’s a part that every person can fall in love with,” O’Mara said. “People should really be excited for that. Everyone loves to fall in love.”