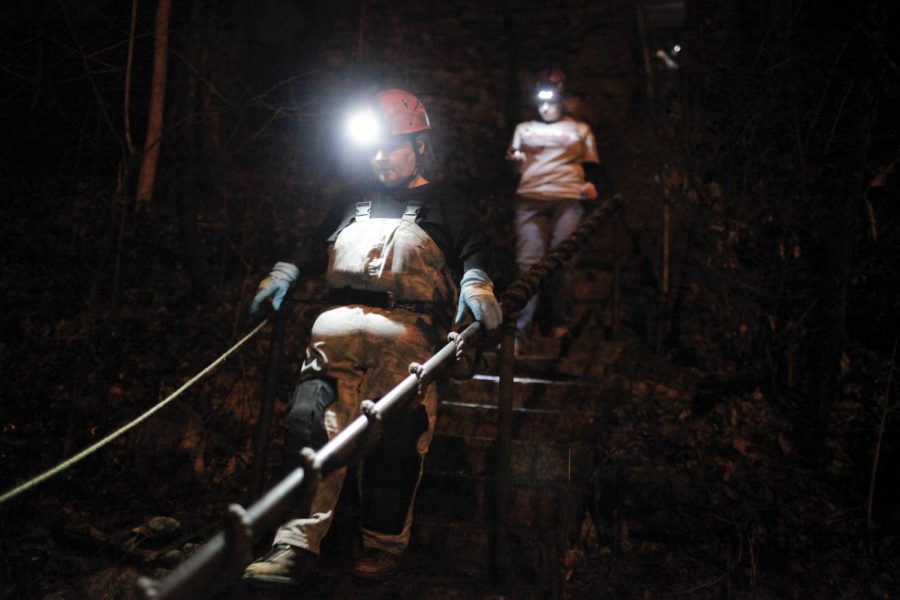 Sue Milburn, 63, of Elizabethtown, (left) and Horse Cave sophomore Chelsea Ballard walk down the stairway that leads into Hidden River Cave in Horse Cave as part of a trip with the Green River Grotto group. Milburn said that if she can go caving at her age then anybody should be able to do it. (Austin Anthony/HERALD)

For most people, caving is a once-in-a lifetime experience. But for the members of Green River Grotto, it’s their life.

The Green River Grotto has been involved in the Bowling Green community since 1979. The group started out with just a few people who loved caving, but now it has turned into a club filled with locals, WKU faculty and students.

The team participates regularly in cave cleanups in the Bowling Green community as well as surrounding areas. However, on Monday night, the Grotto went to Hidden River Cave to participate in some recreational caving.

Clint Barber, the current president of the club, has been involved with the Grotto since 2011.

“I just saw a picture of some people who were caving, and decided to go to the meeting,” he said. “I had always been interested in caving but could never find anyone to go with.”

Since then, Barber has fallen in love with caving, and is always looking forward to exploring the unknown.

“There is nothing like walking through a virgin passage,” he said. “It is the last place on Earth where no other humans have gone. There is something amazing about that — the great unknown.”

While at Hidden River Cave, the group traveled through the cave along with a guide, and were in the cave for roughly three hours.

When the team walked down the wooden steps to the entrance of the  cave, they were greeted with mud, rock and a river to cross. Undaunted, the team trekked on, navigating the darkness, climbing over rocks and wading through water to reach their destination.

Among the Grotto’s members was Chelsea Ballard, a sophomore from Horse Cave, Ky. Ballard has been a member of the grotto since her freshman year and has loved every minute of it.

“I joined because I was really interested in it,” she said. “Living in the area we do, it is important to know about the environment around us. The conservation work we do is very important. It helps to keep the water we use clean, and that affects everyone.”

The work that the team does in the caves isn’t always fun, but it is necessary. The caves become polluted with garbage and toxins, which affects all of Bowling Green.

Tammy Britt, an alumna from WKU, has been in the Grotto for almost three years.

“It is important to understand what we cannot see; what’s underneath us. So many people don’t know about the environment they are living in,” she said.

The team is always looking for new members to share in the cave cleanups. Olivia Boyd, a graduate stunt from Athens Ga., joined this year because she was studying cave beetles.

“We are in a unique place here, geologically,” Boyd said. “For me, it’s a chance to see new ecosystems, and incorporate a new geology into my studies.”

Doing these cave cleanups and restorations is something that the members of the Grotto love, it has given them a sense of sportsmanship as well as a group of people they can trust without a doubt.

“There is no other team-building recreational sport like this one. Everyone has to look out for everyone, you have to trust the people you’re with,” Barber said.

“The group also raises awareness about the karst systems. People don’t realize that the surface effects the underground. It speaks volumes when you are miles into a cave and you see garbage from humans,” he said.

For Barber, seeing these images has made him passionate about cave environments. He is also a volunteer for a cave rescue team, and has dedicated his time and expertise to educating people about the cave systems, and taking care of the cave systems.

“Caving for me is my church. It’s my sanctuary where I can go disconnect from the world and reset the clock so to speak,” he said. “It allows me to discover myself and the world. It’s a time for me to reflect in the quiet and stillness of the deep.

For anyone interested in becoming involved with the Grotto, the group holds meetings on the first Monday of each month at 7 p.m. in the Environmental Science and Technology Building room 402. Interested students can also find information about trips and meetings on the organization’s Facebook page.